Last Christmas I asked for a chess set from “Santa”. Not because I’m a huge fan of the game or wanted to work on my skills, but because I remembered playing it with my dad. When I was about the same age as my girls are now, he taught me the basics – just enough to know the moves but not enough to beat him. It took a couple more years of playing occasionally before I was more than a match for him. I wanted my girls to have those same memories.

Santa did come through with a beautiful set that included both chess and checkers. I sat down with the girls and started with checkers, which they caught on to pretty quickly. They learned the rules and quickly challenged each other, even if they weren’t planning their moves too far in advance. A few weeks later we started on chess, but since this wasn’t a learning set with reminder cards or instructions, it proved too complex for them without continuous play. So there it sits gathering dust until they’re really ready to learn it front-to-back.

I mentioned this story to the fine folks at Cool Mini or Not when chatting about one of their games we saw at our weekly board game group. Zombicide seems to be one of our group’s favorites as they even take time to plan a session a week in advance! Because the age range was listed as 13+, I was curious if it would be too hard for my 10 & 11 year old girls. Cool Mini explained that the rating is always based upon the age where someone can play on their own (read & understand the instructions), but that it would be playable by younger ages with adult instruction. However, they had a better suggestion, and one that they played with their own daughters – Rivet Wars. 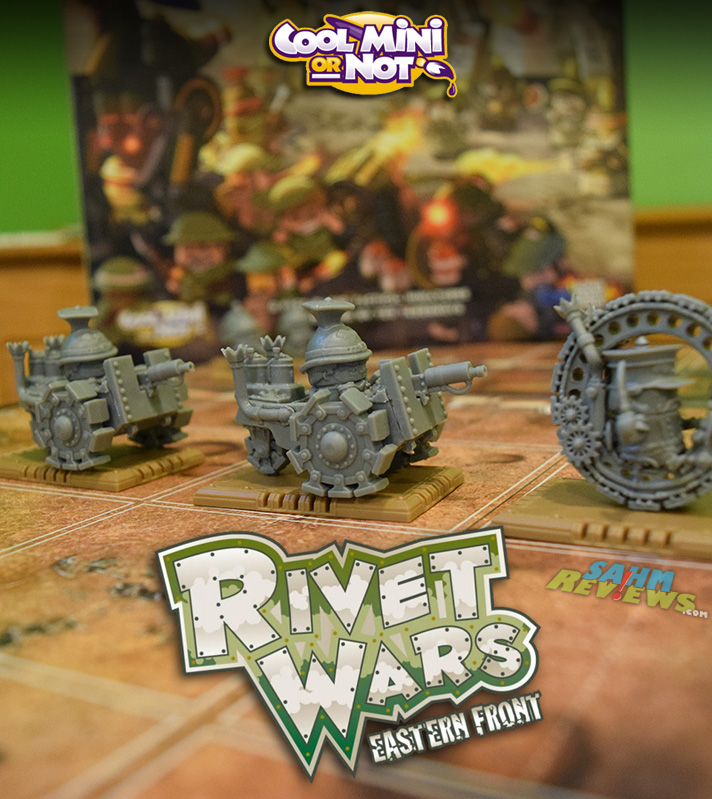 Rivet Wars was first introduced to the gaming world via Kickstarter last year. They set out to raise $25,000 and ended up funding for nearly $600,000! It was obvious from the start that they had a hit on their hands.

If you don’t count our attempt at chess, we’ve never played a miniature-based game. Rivet Wars allows you to control an army of steampunk-styled soldiers and commanders in a fast game of King of the Hill. Rather than a boring pawn or a body-less knight, you command highly detailed characters of varying sizes.

One of the hardest things about learning chess is remembering in what direction each piece moves. Rivet Wars is no different in that each character has its own rules for moving. Some more forward one, some two and some more. They can shift diagonally, but cannot move through another piece. They also have varying attack ranges and directions that also change depending on the type of enemy you are facing. For instance, a Rifleman cannot attack an air unit. This make perfect sense as when is the last time you saw a bomber taken out by a single rifle shot. Fortunately you don’t have to remember any of these criteria – each piece type is accompanied by a “cheat card” that lists all of the stats for those soldiers.

Rather than trying to give you a full run-down of the rules and game play (heck, even the instructions are 33 pages long!), take a gander at this video put together by Cool Mini or Not and see some more advanced strategies.

To help you get over the daunting task of learning a new strategy game, Rivet Wars eases you into the process by giving you different scenarios to play, each one adding new features to your round. This greatly assisted us in getting comfortable with this type of game and is something we wish every strategy game implemented. An easier game does not mean less fun either. We found ourselves in heated battles during the first scenario where we only used a subset of the figures and none of the added cards or obstacles.

After you progress to later scenarios, you begin utilizing Action Cards (above) which give you an extra (and unexpected) move on your turn.

The goal of the game is to earn Victory Points, which are obtained by claiming objectives or by completing Secret Missions (another card type introduced in later scenarios).

All of these variables take this strategy game to a level that chess masters could only hope to achieve. Every game will be different based upon the scenario you choose and the cards you draw. And unlike chess, some units are upgradable! By deploying a ‘plug’ into a larger weapon, you not only add additional abilities to that piece, it just looks that much more formidable to your opponent. 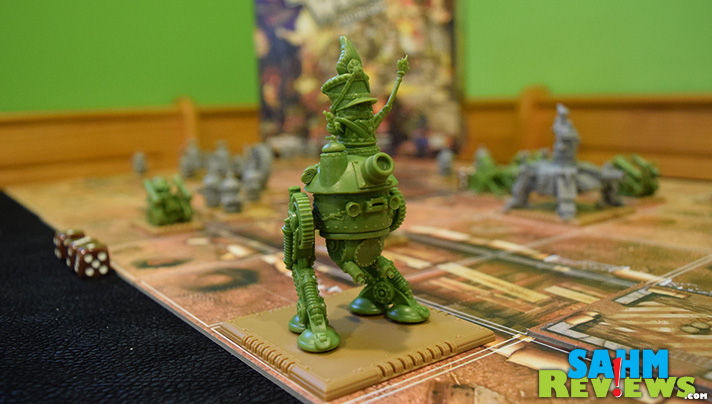 And if all this isn’t enough, you’ll also have to deal with bunkers, barbed wire, tank traps and minefields. Oh, and let’s not forget about gas. This is a war after all.

To say we’re excited about Rivet Wars would be an understatement. It fits our criteria perfectly in our search for a game that appeals to my girls and teaches them critical forward thinking skills in the guise of a game. As an added bonus, each piece can be painted to further customize your experience. Just take a look at this beautiful layout featured on the Rivet Wars website!

Because each scenario only takes 30-45 minutes to complete, this is a perfect introduction to the world of miniature gaming for your pre-teen or teenager. Available directly from Cool Mini or Not, your favorite local game store and of course on Amazon, this 2-player strategy title will have your family fighting over who’s next! If a war theme isn’t for you, be sure to check out their other offerings and follow them on Facebook and Twitter for news about new releases.

But I didn’t even tell you about the best part! Expansions! Once you have mastered this core set, there are a huge number of expansion pieces already available that add addition characters, weapons and even terrain. But I’ll save that for a later feature – just know it is something you’ll never find in a chess game.

Have you ever tried a miniature game?