Thursday September 4th in Rosemont, Illinois (just outside of Chicago), country music mega-superstar Garth Brooks held a press conference to kick off his 2014 World Tour. The room was packed full of local, national and international media who were all buzzing with excitement, knowing that something big was about to happen.  Especially since we had all been teased with the #GarthGoesGhost hashtag and informed that there would be a Special Digital Announcement.

After a warm welcome from Governor Quinn and Brad Stephens, the Mayor and Village President of Rosemont, a humble and gracious Garth Brooks came in, stood on stage with absolutely no pretense, and spent almost 40 minutes talking with us about the tour, his wife and family, his music, and what’s next on the digital music scene.

After exploring 5 different cities to kick off the world tour, Chicago felt like the perfect place. Garth shared,  “Chicago is the center of the Heartland, it’s like the big center of everything. It just made so much sense to come here. And then when you talk about the bottom line of some of the places you’ve had the best time ever playing in. Rosemont was always in those top 5 cities for me.”

“The crowd is very sweet here. Hopefully they will be very forgiving, because the first show is going to suck. Trust me, you want this to be the worst show of the tour. You want it to get better every night. There are a lot of moving parts to this show and we are all old and slow. It’s a work in progress and we are starting out here. We know these people come to party and that’s a major factor why we came here.”

After being on the sidelines since his 96-98 tour, Garth knows that the world is a different place now. Social media, digital downloads and ticket brokers all make the concert experience and the artist – fan relationship very different than what he’s used to. Some of it he is adapting with – and some of it he’s fighting against.

The radio is his social media. “I haven’t figured out a way to do it (social media) yet without telling you when I’m going to the bathroom”, says Garth. “Radio is the bridge between the artist and the people”.  He actively butts heads with video uploading on Instagram and YouTube, even going so far as to trying to get his content banned from being uploaded. The industry remarked to him, “Garth, music was just a victim of the internet. It was a sacrifice.  The genie is out of the bottle.” He disagrees, saying “I’m creating the genie every day. Every artist is.  We need to protect, that’s the main thing. If your songwriters make nothing, the music dies.”

He feels that his fans are taking pictures for their family, and he’s asking them not to upload it. “It’s like a movie – you don’t want to spoil what you are about to see.” Garth’s goal is for everyone to enjoy the experience and be excited.  Not to know ahead of time what’s gong to happen because they saw it online.

Speaking of fans, Garth knows the fan base that he had, but he doesn’t know if they are still there.  “With the ticket sales, it makes me feel good.” says Garth.  “Knowing that we now know a lot of information because of smart phones. 40% of those ticket sales were from people who were either 5 years old or not even born yet the last time and that’s exciting.”  The main thing at a Garth Brooks show is how people sing.  He wants to know who knows the words out there.  From 96-98, they knew EVERYTHING.  And that’s what he’s looking for.  If all of these people, young and old, are singing like that?  He feels he’s got a seriously good shot at a second half of a career which he never thought he’d have. 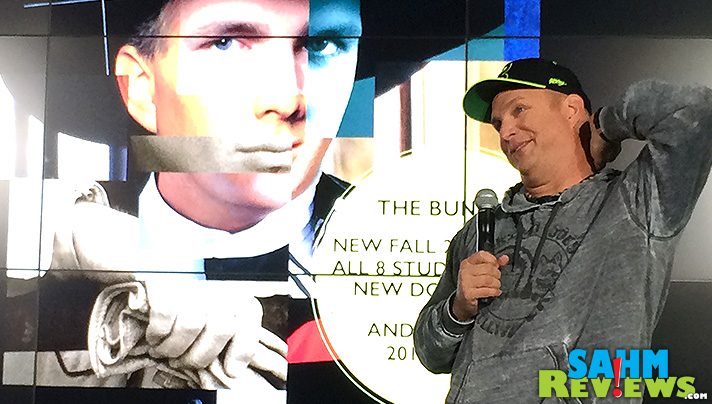 Garth is adamant about looking out for the fans – and that’s where he’s taken on the ticket brokers.  Ticket prices are $55 plus service fees, which puts them at around $70 per ticket.  From Garth, “I don’t care who you are, that’s a lot of money.  And you are never going to come by yourself.  So double it.  That’s a lot of money.  Parking? Want a t-shirt? Probably dinner? That’s a lot of money. Bring your kids – are you kidding me? Unless something has changed desperately, that’s a lot of money.  I hate the letters that say, “Hey man, Id love to come see you live, just can’t afford it”.  Hate those. So you try and reduce as many of those letters as you can. And then now with tickets is social media and, I don’t wnat to offend anybody, but brokers. Scalpers. All of a sudden, their tickets are going on sale the same time as yours. So there’s a lot of changes. So my thing is put more seats than there is demand out there. The 96-98 world tour was all about sell outs. This one is all about making it affordable. Making sure that anybody that wants a ticket can come. On these first two or three cities, we overbooked. We need the practice, we need to get tight, and the only way you can do that is on game day.  I told the guys don’t panic – we are doing 23 shows in the first 30 days. Don’t worry it’s not going to be like this the whole time. I don’t expect it to be like this the whole time. I just think it’s new for everybody and everybody is happy. And if it is like this the whole time?  Now you are staring at even the more luckiest guy on the planet and we’ll figure out a way to play it. But to raise the price of the ticket is just not an option for me.”

Continuing, he says, “I haven’t seen a robot with a credit card yet. That’s kind of the whole thing. The ticket brokers are standing in between the artist and the people that allow me to be the artist. Let it be. There’s a lot piling up between the artist and people that allow them to be an artist. Everything is uphill it seems. It’d be nice for the playing field to get a little better. They will find a way around it, and it’s a constant game to try and keep it real and keep it honest while other people are trying to make money.”

Another thing that you can tell Garth is passionate about is protecting the music – and the songwriters. Time and time again during the press conference, he stressed making sure that the people who create the music are compensated. Which is why he continues to fight against what he calls “the wall of crap” between the artist and “the people that allow them to be an artist”.

Which leads in to the “Special Digital Announcement” –

For the first time EVER, Garth Brooks’ music will be available digitally on GarthBrooks.com.  (It actually launched right before the press conference began!)  You can order singles – but the singles are a pre-order for the album.  Garth feels very strongly about this – he doesn’t make singles. His job is to make the albums worth the money they’re asking for it. He believes that albums change lives.  If you don’t want to purchase a whole album – you’ve got country radio to listen to.

With his concept, all of the writers and publishers get paid at full rate. You can tell that this is his cause and passionate about – protecting the songwriters and those that contribute to the making of the music. He stressed it over and over again. 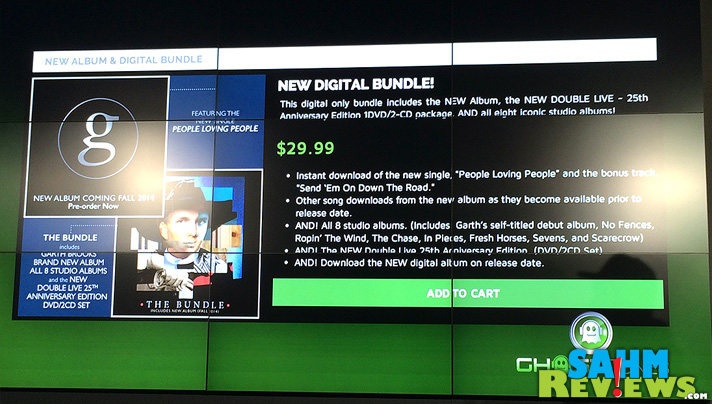 Through his website, they have put together a digital bundle of all of his music – 8 studio recording, a double live 25th anniversary recording coming this fall, the new album in the fall of 2014 and another new album coming in the fall of 2015. He refused to talk prices because he didn’t want to be a salesman – but one of the slides behind him said $29.95 for the entire thing.

As Garth explained, he didn’t find an e-commerce site that was selling music the way it should. He wanted a place that just sold entertainment. That took care of the customer, and that was there only thing. The pricing was flexible so the customer could get a break and you could sell it any way the artist wanted it sold. He begged and pleaded and no one could do it. He was asked about other artist’s music, not just his own. It was great that HE was going to do this for his music, but what about everyone else?

Over 7 million singles or album configurations are available at this point.  It works differently than the 70/30 split that most digital music is on right now. It’s on a more flexible scale. It’s sold how the artist or label that owns the artists music wants it to be sold. Consumer can get it cheaper – that’s what its all about.  And you can play it on any device you want when you get it.  It’s not territorial.

Garth said it best, “Music should be available to everyone that loves music.”

As of today, GhostTunes.com has over 7 million singles or album configurations that are available. Garth’s music will be available on GarthBrooks.com and GhostTunes.com. Currently, GhostTunes is Garth heavy, but they are trying to show the industry that they can do it for any artist. It’s young, flexible, small and wants to stay that way.  Doesn’t want corporate “wagging the tail of the dog”, as Garth puts it. They are interested in letting radio and record labels know that they are partners in the process – a bridge to carry music between them to the fans. Ultimately, Garth is hoping that GhostTunes.com becomes THE place to get your entertainment, not just an alternative. The biggest thing that you can tell Garth was excited about is that he feels this is a platform not only for the consumer (better prices, easier access, no restrictions on what devices that you can use) but is for the artists as well. As he spoke of several times, this space will honor the song writers, artists and the labels by allowing flexible payout pricing structures so that the artist or whomever OWNS the music has a say in how it’s sold.

I had an amazing time at the press conference.  And I’ve already gone on to GhostTunes.com and purchased the entire Garth Brooks collection for my sweetie in anticipation of our attending this show next Friday night. Huge thanks again to SAHMReviews.com for the opportunity!!!

Are you going to the show?  What do you think about Garth and the launch of GhostTunes.com?  I’d love to hear your thoughts!