During our on-going efforts to bring you great games from smaller publishers, sometimes a story arises that just bears telling. Yes, we’ll show you how Korner’D is played with great photos of the game. And we’ll regale you a pun or two as normal, but first we just have to highlight something very special about this game that wasn’t discovered until long after it was created. 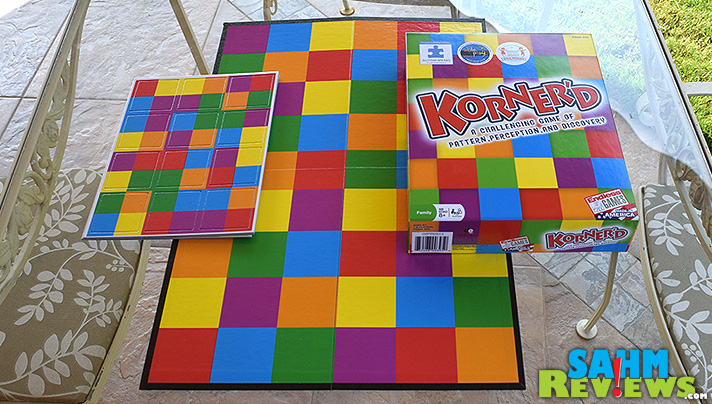 When we were first presented with a copy of Korner’d from Mr. Brian Turtle, the National Sales Manager from Endless Games, he mentioned he had an interesting story to go along with it. A short time later he forwarded it to us and ever since we cannot get this tale out of our heads. But rather than trying to retell it, let me give it to you in Brian’s own words.

KORNER’D was brought to Endless Games by an outside inventor in May of 2012. My partners and I liked the game on its own merit, but wanted to play test it before committing to make it a part of our 2013 product line. This is fairly standard practice, but in this instance, we were play-testing after schools had been let out so our resources were somewhat limited. I played the game with my own family and friends and it stood up. Then I played with my nieces ages 11, 9, and 7.

My 11-year-old niece Kaitlyn has Asperger’s Syndrome and suffers from the social anxiety and low self-esteem/confidence as many others on the Autism spectrum. She’s not always the first to want to play a game as the winning and losing is too much to handle. Instead she’d prefer to do a jigsaw puzzle, play with some construction toys (Legos), or some other solitary activity.

After a little while, Kaitlyn got involved with the game, and to everyone’s surprise, she excelled at it. She was beating her sisters, her cousins. She even beat me and the rest of the parents playing! The change in her attitude, confidence, and disposition all-together was remarkable! Here was a girl – my own goddaughter – who rarely has more than 3 words to say at a time; and now she was “smack-talking” to the tune of “You’re going down uncle Brian!”, and “I’m gonna beat you again next game!”

She came to life playing this game.

Because it seems anymore that everyone knows someone on the spectrum, it didn’t take long for us to play this game with other autistic children, and the results were consistent. For whatever reason, the children on the autism spectrum who played this game could recognize the patterns and “crack the code” faster than their neurotypical counterparts.

We subsequently contacted Autism Speaks here in New Jersey to explain this phenomenon and learn more about it. The folks at Autism Speaks taught us about some of the characteristics of autism, including this sensitivity to change and recognizing when things are out of place. KORNER’D, they had told us, really plays to the strengths to someone with an over-developed right side of the brain.

What they liked most about the game was that it is a great confidence builder for autistic individuals. It’s something they can excel at; an exercise that’s “in their wheelhouse” so to speak.

My niece Kaitlyn is now featured on the back of the KORNER’D box, and we are happy to donate 5% on every game sold back to autism research!

Now how wonderful is that? What started to be a business-as-usual game deal turned into something that not only personally touched a family member of an Endless Games employee, but thanks to their decision to take on the game and distribute it, helps other children throughout the world engage in a way their families may not have thought possible.

So what is Korner’D? It’s a quick-paced matching game that pits both your color and spatial recognition against your opponent. 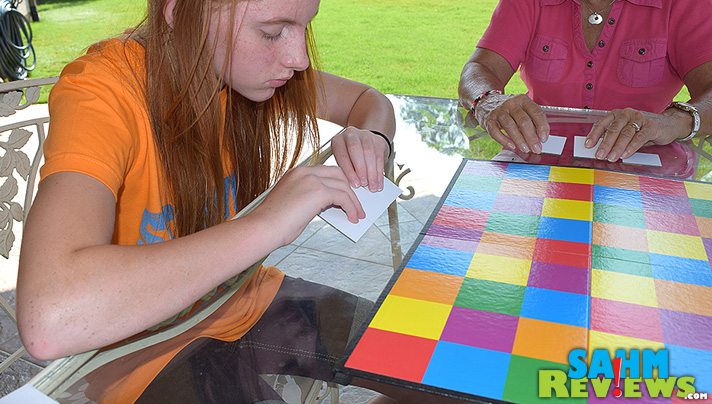 You have a board with six different colored squares placed in a somewhat random order. Each player is dealt three square tiles face down that have four of the colors on it. Their job is to match them to the corresponding squares on the board, matching both colors and position. 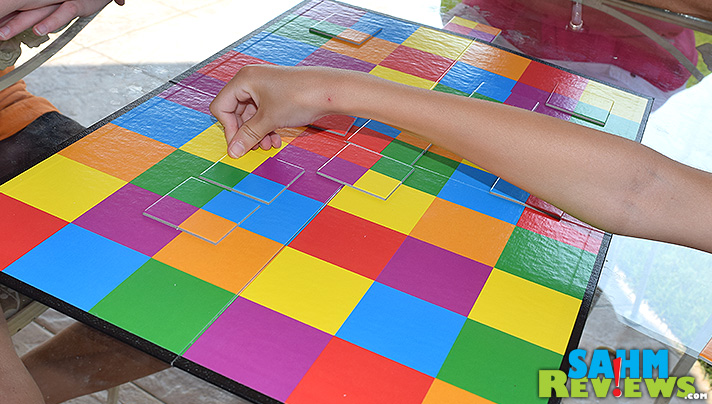 It sounds easy, but under the pressure of competition (and patterns that closely resemble each other), quickly finding the match is not as easy as it sounds. There is only one spot on the board for each tile, and with three in each hand you will not fill up the board.

As shown here, it was not uncommon to get stuck trying to find the placement of the last tile. Previous-played cards seem to blend in, so having more on the board did not help.

A round of Korner’D only takes a minute or so, allowing you to have multiple games in a short span of time. Unlike some other speed-based games we have highlighted (cough…Set…cough), age did not play a role in the outcome. This also plays into the facts mentioned above about people in the Autism spectrum having a gift when it comes to games of this type. The natural ability to see the color arrangements quickly leads to a successful win.

If you’re in the market for a unique gift idea appropriate for someone diagnosed with Autism, definitely give this game a very serious consideration. Even if you’re not in that market segment, Korner’d is still quite fun to play with the family, as its simple concept is easy to explain to all ages, and everyone competes on the same level.

You can find Korner’D online or at select local retailers for around $20. Also check out Endless Games’ Facebook page to see what else they’re working on!

One last thing about Korner’D. Not only does Endless Games contribute 5% of all sales to autism research, they have also offered to give a copy to one of our readers here at SahmReviews.com! Entering is easy via the entry form below! Good luck to all, you’ll have a blast with this game!
Korner’d Board Game

36 thoughts on “This Game Has Autism Korner’D”