There I was, standing in the living room with my arms outstretched and doing the can-can. Had I lost it? Mid-life crisis? Maybe, but our latest thrift treasure sure helped trigger it! I present to you our latest $1.38 purchase: Quelf.

Buying a used game has its inherent risks. The odds of missing pieces is rather high, especially when there are numerous pieces normally included. Almost everything was here, all 440 cards, the game board, the timer, 8 character game pieces and the pad of paper. Only thing missing, the die. Easy! We must have a dozen or so laying around in a toy box. 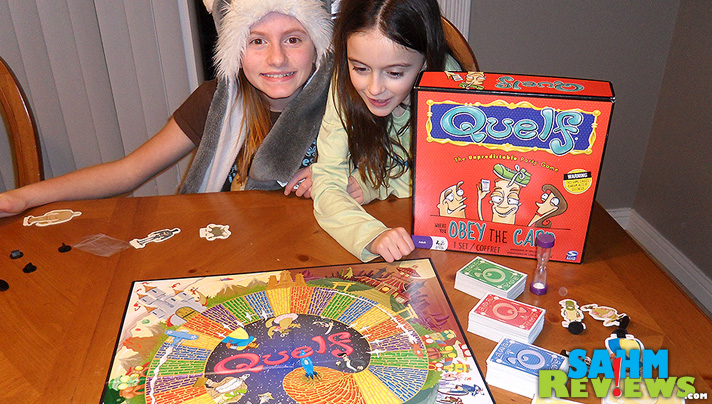 Quelf is one of those (award-winning) silly party games that make you say and do goofy things in order to progress. It is not a game for the shy and probably a fantastic activity for the inebriated! Recommended for 3-8 players and marked ‘adult’, but I didn’t encounter any items that would prevent pre-teens from enjoying the game. If we happened across a card that asked them to do something they had no idea about (ie. name Academy Award-winning movies), we just skipped it and drew another card. In fact, among the numerous awards listed on the side of the box are ones from Creative Child Magazine and National Parenting Publications. If you’re still worried, there is a Quelf Jr. version as well.

Our very first card had me speaking like a member of the opposite sex for the rest of the game or take a penalty. I managed to last a couple rounds, but then gave up and took the penalty after my throat became hoarse. My oldest was thrilled to find her first card required her to build a pillow fort and stay in it for one entire round. 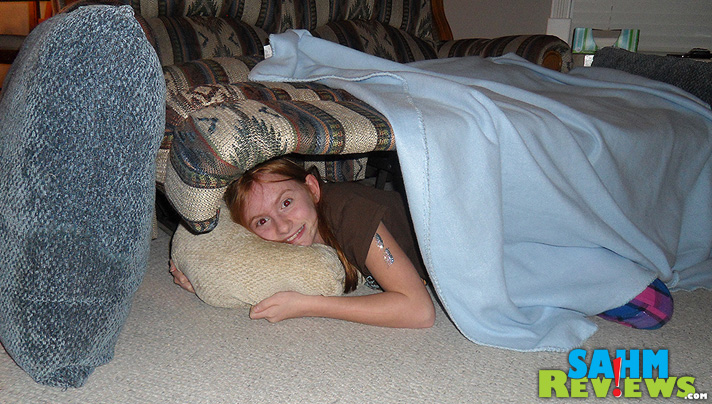 My other daughter wasn’t so fortunate. Here she had to find the bathroom plunger and wield it like a sword for the rest of the game (or until another card had her do something different). 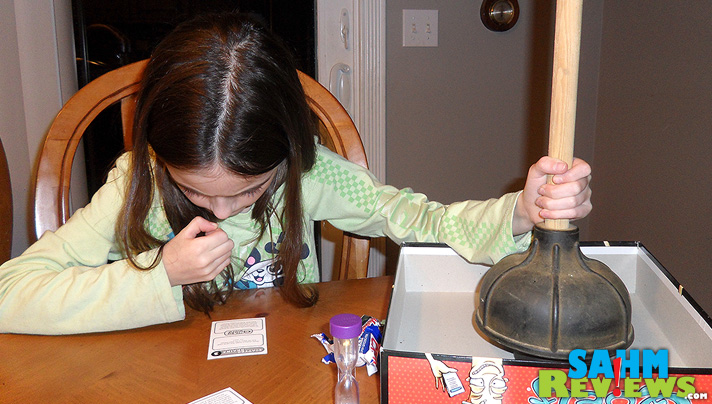 We’ll definitely be bringing this game to our next extended-family gathering. Hopefully there are eight other players so I can sit back and watch and not have to worry about making a fool of myself!

Get your own copy on Amazon and be sure to learn more about Quelf on their official website. You can also see more in-action photos via their Facebook and Twitter pages! Hey, who left the plunger out?!