Among the different genres of games we’ve encountered this year is one that is hard to put a name on. “Silly Games” seems too child-like and they don’t really fit into a traditional “Party Games” category either. Our latest find from Patch Products has given their card game a name that might sum it up best – “Wacky Games”. Their new 100 Wacky Things Card Game is available at Walmart and comes in at under $9 – a perfect stocking stuffer!

But what makes this game so wacky? In the spirit of other games in this category we’ve highlighted (Quao, Quelf), 100 Wacky Things is a simpler version that can be played in minutes by all ages. Even those younger than the recommended 7 & up on the box. 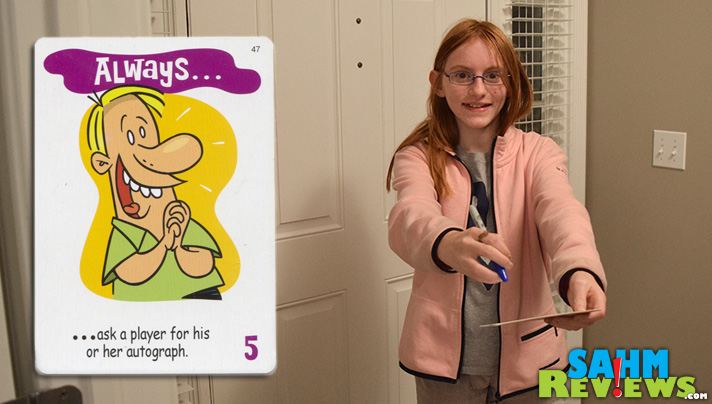 This isn’t a complex game with complex rules. On your turn you draw a card and read it. There are two types you can end up with, an “Always” card which you perform every time it is your turn, and a “Whenever” card that is triggered by an event. Unlike the previously-mentioned wacky games, there are no penalties for forgetting to perform the actions. The game is only meant to be fun, not a strict competition. There are points on each card that you add up at the end of the game to determine a victor, but that is secondary to the laughs and giggles you’ll earn along the way. 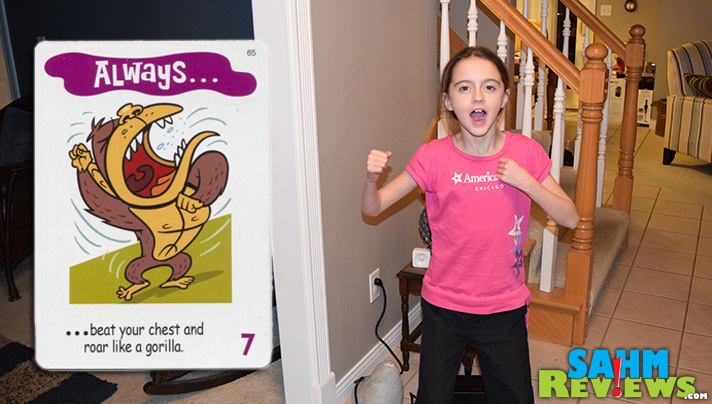 In a twist, you are allowed once per person per game to give one of your cards to another player. Tired of beating your chest like a gorilla? Make your opponent do it for the rest of the game. Be warned, you are also giving them 7 points!

After the end of the agreed-upon number of rounds, everyone adds up the point values of the cards in front of them. The winner is then declared the wackiest!

If you’re in the market for a game that all members of the family can play together without having to worry about complex rules or strategy, 100 Wacky Things will probably fit the bill. Also available on Amazon, you’re probably better served by grabbing one on your next trip to Walmart. Look for it in the game aisle hanging with the other card & dice games.

The fine folks at Patch Products have also elected to offer THREE copies of 100 Wacky Things for readers of SahmReviews.com! Enter using the form below and come back tomorrow for additional entries!

20 thoughts on “Things You Thought You’d Never Do”