Unless you have been hiding under a rock, you’re already aware that The Hunger Games: Catching Fire hits theaters this weekend. I’ve seen plenty of previews and think the movie looks fantastic but don’t have it on my agenda. Yet. I’m guessing you’re asking “why not?” Well, I haven’t read the books yet and I’ve enjoyed reading books before seeing the movies. The preview looked so great, I purchased the first two books and have them ready to read during an upcoming trip.

In case you haven’t seen the trailer yet, here it is…

Don’t worry, I may not be on my way to the movie but I’m still soaking up all The Hunger Games: Catching Fire madness: Contests, promotions at stores like Walgreens and Subway, announcements, chocolate and (mind drifts…)

Not just any chocolate. Chocolate inspired by The Hunger Games. 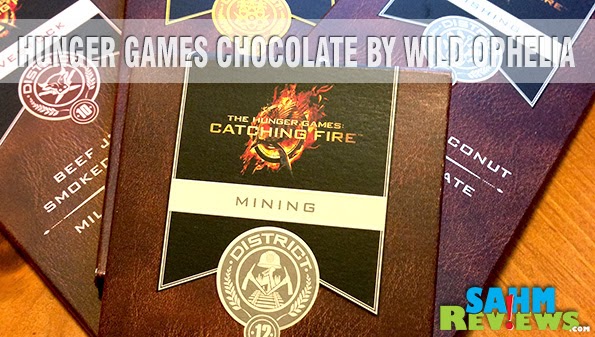 Anyone who has read the books will appreciate the significance of this line of chocolates. Each chocolate bar is designed to represent one of the districts with flavors that reflect the elements of that particular district.

I’ve tried four of them – District 4 (Fishing), District 10 (Livestock), District 12 (Mining) and District 5 (Power). They combined non-traditional flavors and despite their unique qualities, I didn’t hate any of them! I wasn’t sure how beef jerky would be as an ingredient in a chocolate bar but it simply added a saltiness to the chocolate. All four that I tried were unique but my favorite was probably the Sea Salt, Coconut and Dark Chocolate. That was District 4 (Fishing) in case you were curious. If I had already read the books, I probably would have enjoyed the way they brought the settings of the book/movie to life in the form of chocolatey goodness.

These chocolate bars are available individually at Walgreens and Safeway but are also available online individually or as a “Library” set that includes all the districts in a fun book-like box.

But there’s more to life than just chocolate. (Wow. Did I really just say that?)One of the things that really has my interest with this series is its empowering nature. Kids these days are resilient and as I’ve mentioned before, very innovative and caring. Each year, companies like Build-a-Bear highlight some of our leaders of the future. The Hunger Games: Catching Fire offers an opportunity to acknowledge kids who are standing out in their community, making a difference or going above and beyond. I want to hear about teens you know who exemplify the characteristics of determination, vigor and passion like Katniss and Peeta. I’ll randomly draw one of the entries and their nominee will receive a Hunger Games: Catching Fire prize pack compliments of Lionsgate. The prize includes a Fandango $20 gift card, Subway $10 gift card, The Hunger Games: Catching Fire Revolution iPhone 5 Case, The Hunger Games: Catching Fire Journal and Poster. Since nominations involve a minor, you can opt to describe the person without including their name. The Rafflecopter form will provide a place to privately share the nominee’s name. I’ll draw a winner on December 9, 2013.

Looking forward to hearing about teens who make a difference!

Disclosure: Chocolate samples, official link to trailer and prize pack were provided to facilitate this post. No monetary compensation was received but sometimes getting paid in chocolate is okay. All comments and opinions are my own.

1 thought on “Hungry to Catch Fire and Inspire”