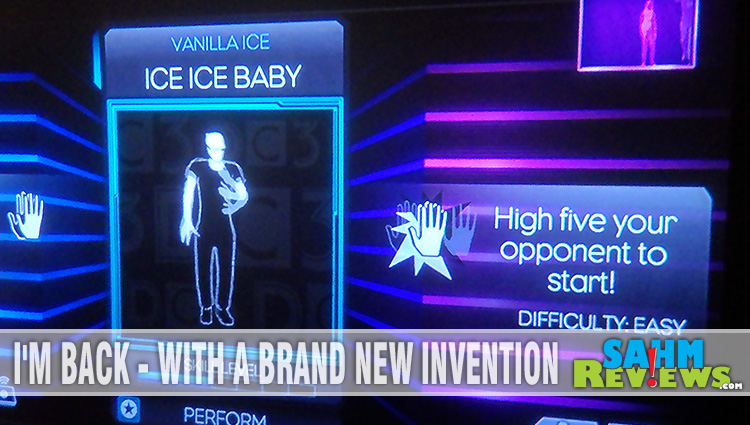 Sit back for a second as I make myself feel really old… (and depending on your age, you may feel really young…)

Back in 1990 when DH and I started dating, we would zip around campus on his Honda Helix jamming out to the tunes of the day. No matter what mood I was in, that would always make me smile. “Ice Ice Baby” has forever reminded me of those days and I smile whenever I hear it, hear a rendition of it or even hear someone say it.

As I sit here feeling old in body but young in spirit, I’m smiling from ear to ear just thinking about those times so long ago.

When I started reading about Dance Central 3 for Kinect, you can only imagine my delight to see this:

It’s no secret though. When DH saw the song list, he made mention of it. The funniest part, though, is that the minute my daughters saw the play list, they said “Mom, this one has your favorite song!”

I’ve said it many times before that we enjoying playing games as a family and we also enjoy dance video games. We put Dance Central 3 into action so we could dance the night away.

DH loaded up Microsoft SmartGlass on the iPad to serve as DJ but he was having problems getting it queued up. It took some trial and error but I think he finally figured it out. Not only did he need to be signed in to Xbox Live but the game also needed to see that he was playing. SmartGlass is pretty new so I’m sure they’re still working through the bugs.

Just like prior versions of Dance Central, the game offers a variety of options for all different types of game play. The Story Mode steps it up from prior versions of the game allowing the game to be more in depth and have personality. Dance at different levels through different dance decades, perform a variety of choreography and ultimately work on a quest to master every move in every dance. With that, you’ll unlock exclusive content and a Master Quest!

Party Mode is where our girls gravitated and it offers five different modes within it.

Each mode has a different feel to it. Perform (1 or 2 players) is where you learn the dances and perform like a traditional dance. Battle sets two opponents against each other. Make Your Move allows two participants to design their own moves trading back and forth and performing. Strike a Pose is just as it sounds… moves are shown and the dancer has to try to land each move correctly to score points. The more correct in a row you can nail, the higher your score. Keep the Beat – Freestyle dancing showing how in tune you are to the beat.

The game includes a lot of little details that make the game flow better and more fun. As an example, I love the sparkler effect on the moves. As you watch the dancers on screen, they leave behind streaks, like sparklers in the night, that show where they moved. Watching those streaks of color can help you really grasp where and how they are moving. Another cool feature: Rather than say “I’m ready” or hit a button to start, there’s a feature that allows dancers to simply high five each other when they’re ready!

As is typical of Dance Central games, the goal is to do the moves correctly. It can be frustrating when you don’t know the moves. First, it offers tutorials where you can get step by step (literally) instructions on how to do a move. You practice it until you’re comfortable before you put it into the choreography of an entire dance. But once you do that, it’s still helpful to know what you are doing wrong so Dance Central lets you know by highlighting the part that is out of sync. If you look at this photo, you’ll see that the leg is highlighted in red because she’s supposed to have it on the ground but she actually has it raised. If you pay attention to those cues, you’re able to modify your technique and compensate until you get it right! 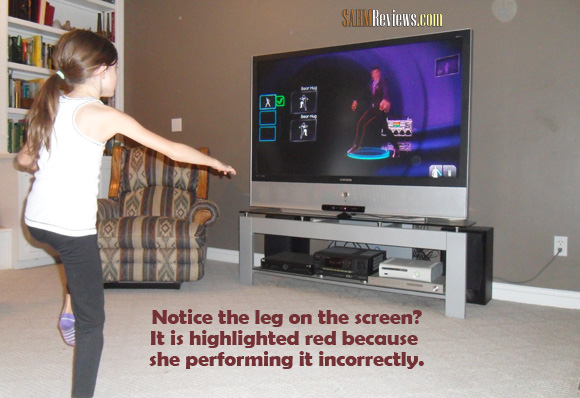 Once you get all that figured out, you can invite your friends over to take advantage of the party modes. Party Time mode and Crew Throwdown allow you and your friends to dance and have fun or compete in a dance tournament with up to eight players on teams! The soundtrack is awesome with artists like Katy Perry, Maroon 5, Kelly Clarkson, LMFAO, Usher and many more – including throwback songs like Ice Ice Baby, Macarena, The Hustle and YMCA.

We’ve tried a variety of dance games and each offers a different experience. Dance Central seems the most in-tune for older kids as well as adults who want to master the moves so they can dance with confidence both in the game and offline.

We love it for dancing and having fun. It also will make a great addition to the workout schedule when I need something that doesn’t feel like I’m actually working out.

For more information on Dance Central 3, visit their webpage. It’s available on Amazon.