A while back, I watched an episode of Undercover Boss which isn’t one of my typical must-watch shows.  The reason I was interested this time around was because it focused on Lucky Strike, a chain of bowling facilities.  Having attended a party at one during BlogHer in Chicago a few years back, I was interested in seeing more behind the scenes of this modern version of a bowling alley.

As I watched it, I was impressed by one of the bartenders as he zipped around the facility.  A modern-day version of a carhop, I guess.  Either way, I thought it was cool.  As it turns out, he was decked out in Heely’s. Seeing as I have two daughters who placed Heely’s on their “I want THAT” list quite a while ago, I was well aware of what Heely’s were.  Just had never seen them used in such a way.  I thought it was novel and have been waiting to see them trend at restaurants and bars ever since.

But I haven’t.   Yet.  I’m guessing it will happen one of these days. 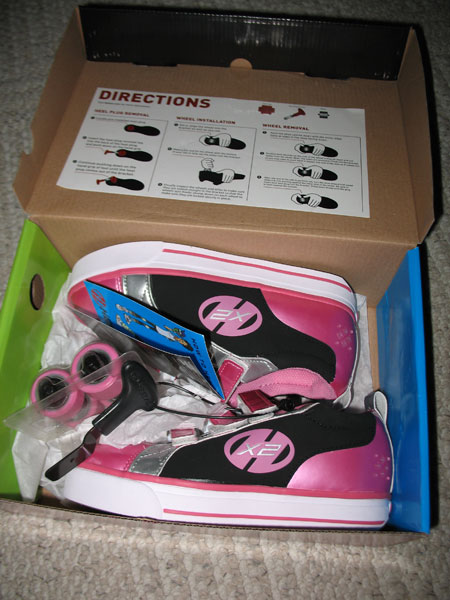 In the meantime, we’re putting them to the test on 8 year old, Miss M.  We’ve been taking family walks at least a few nights a week and I thought the Heelys might be a nice addition to our walk. We ordered a pair of the cutest Heelys off their website – and let me tell you, it was a tough choice.  There were a LOT of cute styles and colors to choose from!  Ultimately, we decided on a pair that had two sets of wheels instead of one!

When they arrived, we opened them and were surprised at how adorable they were in person! Even better than the picture on the website!  DH had the assignment of assembly.  But he made it look really easy.  The shoes come with a cover plate where the wheels belong.  After popping that off, he followed the directions to insert the wheels and before we knew it, the shoes were ready for wearing.  I was quite surprised at how easily he had them unboxed and ready to go! 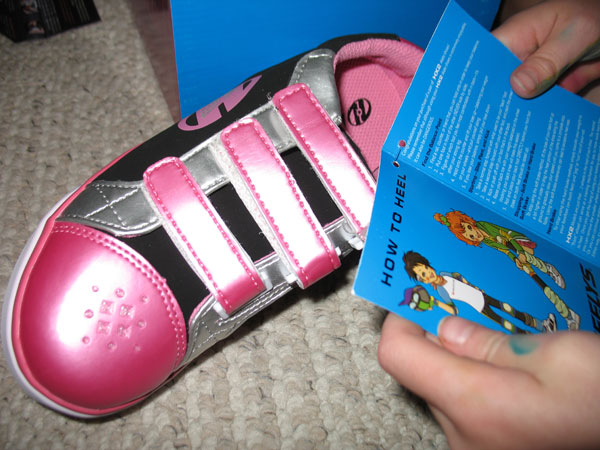 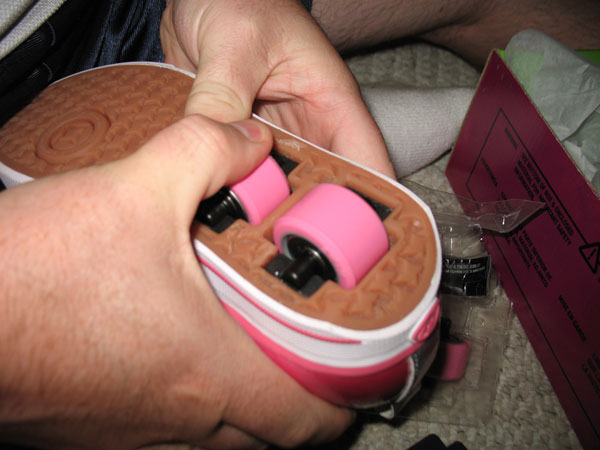 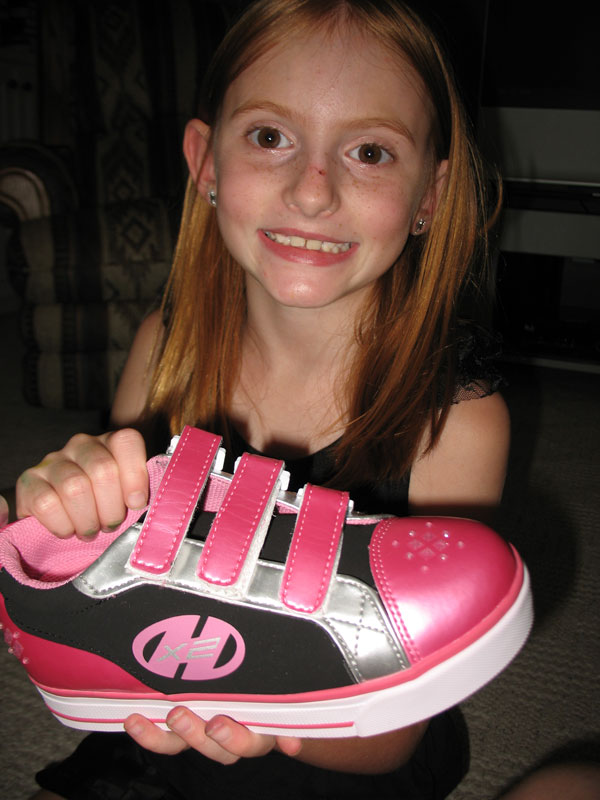 We put the Heelys on Miss M and let her mess around on the tile in the house a bit. She was extremely unstable and spent most of her time trying to get a feel for the unconventional footing.  She moved around slowly, holding onto furniture until I grabbed a hold of her and started to pull her around.  She was excited about wearing them, but I wasn’t wild about her losing her balance and hitting something on the way down! 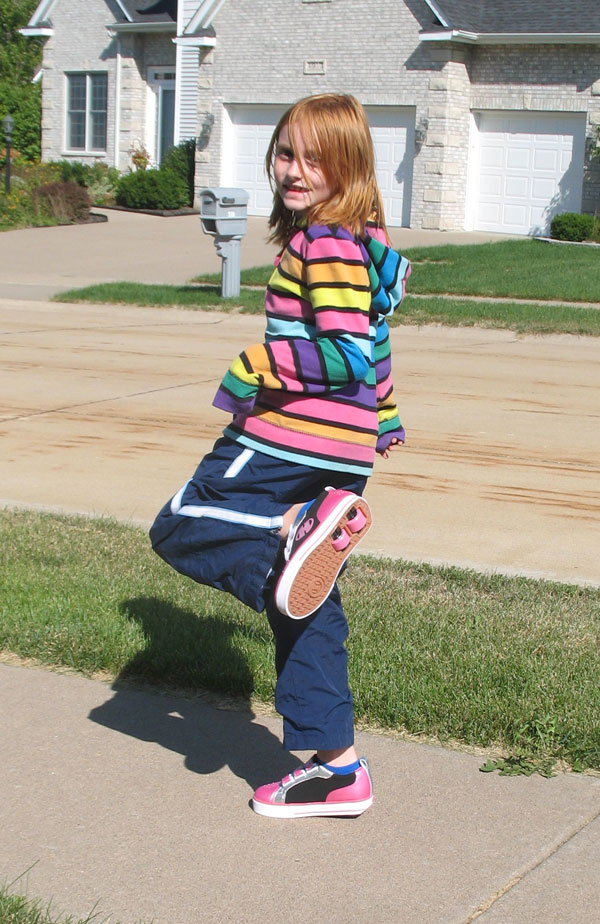 Later, we took put them on and let her go outside.  After getting her off the front porch, she insisted on doing the rest herself.  Miss M was excited but moved cautiously as she shuffled her feet along. When she wasn’t shuffling, she was on her tiptoes.  I need to have her sit down and watch some of the videos on the Skate101 page so she can get some ideas on the best ways to move about in them.  Once she has that figured out, we’ll be ready to let her take them out during our family walk. 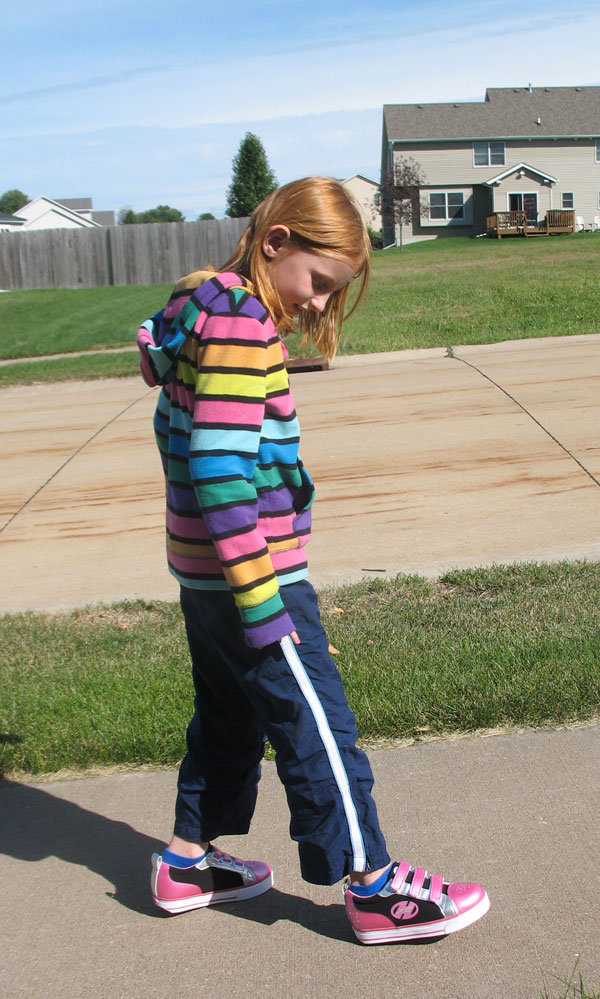 They’re really cute and by the time she’s old enough to get a part time job, maybe they’ll be standard fare for moving about in a professional setting.  I know if I had them when I was working, I certainly would have moved around faster!  But for now, we’ll use them while we’re out and about!

If you’re looking at buying a pair of Heelys for your child (or for yourself), be sure to check out the Skate101 page.  There, you’ll find information on assembly, usage, safety and more… things like tricks!  You can also check out the playbook that offers tips on safety.