When Miss M was born in 2003, we were simultaneously thrilled and relieved following many years of fertility treatments and a high risk pregnancy. So each day for the first year of her life, I either photographed her or videotaped her (or captured a picture on the webcam that we had set up and fed to her webpage.) Never knowing whether there would be a second child, I wanted to make the best of it… even if I undertook a challenge that I would never be able to duplicate if a sibling ever came along.sea

Having a digital camera, a webcam and a video camera made it easy to capture even the tiniest of moments. Miss M went on a safari in the jungle, crossed the Delaware and served Pepsi from the fridge. 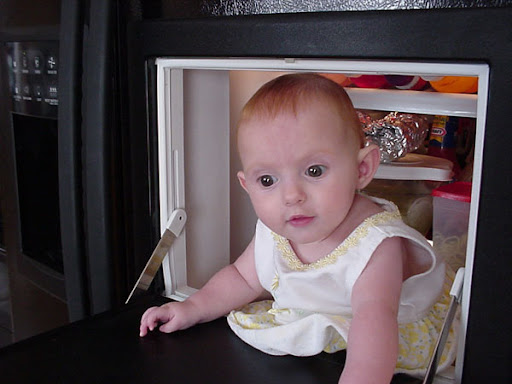 But if I didn’t post the pictures on her website, chances are that family didn’t see them. Being a new mom, I was tired. Uh-huh. Had plenty of time and energy to create some really cute photos but I was honestly too… okay… lazy to email them to family. I mean, geez, emailing photos took forever and had to be divided between several emails. It was just a pain. 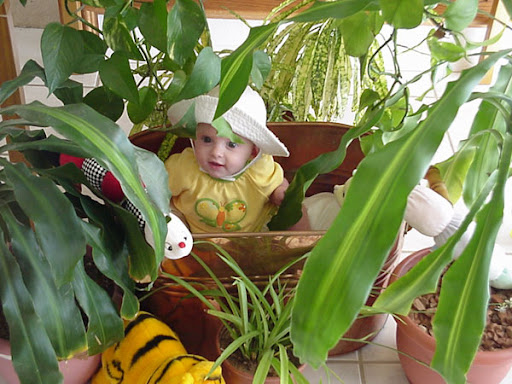 I always provided the best on the website and promised to email them whichever they asked for. As for the rest, I would burn a CD when they came to visit.Although I don’t maintain their websites now, Miss M and Miss K both get their pictures taken plenty. Thanks to both SahmRamblings.com and SahmReviews.com, I enjoy sharing stories, photos and videos. Alas, I still don’t do very well about emailing photos to family. Worse yet, moms of classmates send a photo here or there of my daughters yet I don’t return the favor as often as I should. It’s not that I don’t want to, it’s just that I have soooo many photos from class parties, events and sports that I hate spending time sorting and emailing. It’s just a pain.So when I was introduced to Seagate’s FreeAgent Dockstar network adapter that works in conjunction with the Seagate FreeAgent Go portable drive, I saw a solution. 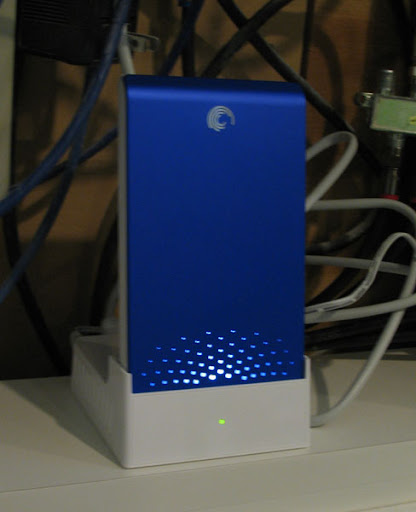 Like many portable drives, the FreeAgent Go is for people, well, on the go. People who want access to information while in different locations – work, relatives, school, client offices, etc. However, the FreeAgent Dockstar is the key player in this particular equation. While stationed in a single location, the portable drives that are hooked up to the Dockstar become network drives accessible from anywhere by the owner… or anyone the owner grants access to. The unit is a dock for the FreeAgent Go portable drive but has USB connections for three additional portable drives. Despite the clean, sleek appearance, we hooked ours up directly to the router that is stationed in our basement. Pictures, music, video and documents can all be accessed remotely without the need to tote along the actual drive. There are even applications for the iPhone, iTouch Droid and Blackberry.It has many applications, but I don’t work outside the home so there wasn’t an immediate need to access information elsewhere.

What worked well for me is the ability to just copy photos onto the Seagate FreeAgent Dockstar, which we had mapped as a standard network drive. Since I’m a little lacking in the process of actually sharing the tons of photos I have, I figured this would be a perfect testing opportunity.

The first time that I created the folder on the drive, I went to PogoPlug and sent invitations for friends and family to access the photos. Sure, I could have emailed the photos or uploaded them to Snapfish, Walgreens or Photobucket but as I already indicated, I have a bit of a follow-through issue with that. Utilizing the FreeAgent DockStar is the lazy way to share the photos, including an automatic notification option that sends an email to the authorized users (paraphrased, of course) “In case Nicole didn’t email to tell you, she added more photos to the folder.”

The only problem that I have with this method is that the users on the other end are limited by the upload speed of my ISP. I was sharing a mass amount of photos with the classroom photographer when she said it worked well just very slow. Since the data is stored directly on the drive located inside my own house and not on a network somewhere in cyberspace, each time someone wants to access or download the files, they have to wait for my cough 1mb/s upload. Personally, if I planned to share large files with a lot of people, I might be better suited to upload to a site like Photobucket where I endure the slow upload only once so nobody else has to. However, if you are fortunate enough to have decent upload speeds or if you’re only uploading down-sampled photos or only sharing occasionally, then it isn’t as much of an issue.

During my whole testing process, I realized this is the perfect tool for the kids’ school yearbook editor. She currently utilizes Walgreens for acquiring photos from families. If the PTA invested in a FreeAgent Dockstar and hooked it up at the school, families would be able to easily upload photos, similar to the current system, but other families could easily download also. Yes, she would have to give authorization to participating families (just a matter of entering email address, which can be done in bulk) but she has to do that anyhow using Walgreens.

But the FreeAgent Dockstar isn’t just about sharing and accessing photos, videos and documents remotely. Another cool feature is that it can be used as a media server to stream to your XBox360 and PS3 game consoles as well as the game consoles of people you grant drive access to. The unit also integrates with social networking sites like Twitter, Facebook and MySpace.The minor pitfalls (sort of): Other than the inconvenience of my slow upload, I had a few other small issues to contend with. After I had transferred a bunch to the mapped Seagate FreeAgent DockStar drive, I realized some were sideways… so I rotated them as I would on any other drive. Unfortunately, any photo that I rotated displayed as corrupted when accessed remotely. I deleted them, rotated them on a normal drive then copied them into the Seagate drive and experienced no problems at all. There also wasn’t the ability to download an entire folder at once. However… and it’s a BIG however… in the time that I first received the Dockstar and the time that I’m writing this post, both those issues have been resolved. Goes to show that Seagate has an ear to the ground listening for issues… and acting on them! As a result, the only complaint that I have is that when they updated the firmware, I lost my windows file sharing settings and had to set them back up.Overall, I think the Seagate FreeAgent Dockstar is a great unit. It will give me the ability to access information when I’m not at home as well as make sharing much easier. If you already own a FreeAgent Go, this is a fantastic docking unit. Think you could make use of one of these? 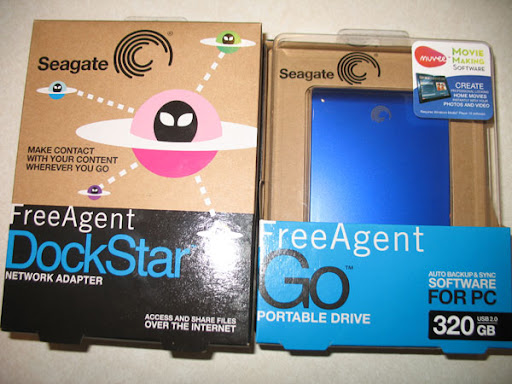 The Prize: FreeAgent Dockstar and FreeAgent Go
Participants -…must provide a US shipping address
…must provide an email in the first comment, email me directly with an email address or have email accessible from their profile.

Sometime on April 6, 2010, a winner will be chosen at random (using random.org) from all valid comments left. Winner has 72 hours from posting/notification to respond. If winner cannot be contacted, I will move on to the next random selection.
How to enter: <Giveaway Closed>