The other day at school was pajama day for Miss M’s kindergarten class. The entire class showed up for school in their pajamas, equipped with sleeping bags, blankies, pillows and stuffed animals.We have done this pajama thing each year for preschool and I know it’s a common thing at the elementary schools. I always make sure I send them in one of their PJs that looks like an outfit and is not at all revealing. 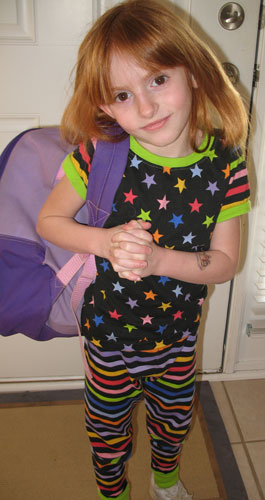 Well this time, I didn’t have any choices. Miss M knew exactly what she was going to wear and my job was to hide it for several days to make sure it stayed clean. A few weeks back, we received a new pair of pajamas from LittleMissMatched. Let me tell you that when I was invited to participate, trying to figure out what I wanted to get from there was very difficult. Sooo many cute things to choose from! Well, Miss M has this fascination right now with rainbows and anything multi-colored. So when I spotted the black zany pajamas, it was game over.

As soon as that package arrived on our doorstep, she was all over it. Since then, she has worn them the night I wash them, even if that means she just wore them the night before. I’m not kidding.  I haven’t showed her yet that they have tights, tanks, panties, t-shirts, socks AND accessories to match.  Or in the case of LittleMissMatched – to NOT match.  They have several different color schemes and themes that carry throughout the entire line so your little missy can look stylishly uncoordinated from head to toe.

There are tons of adorable outfits at LittleMissMatched, but that isn’t all they sell.  For example, I was checking out their bedding.  You know what?  They have a zany bedding set also!  And here’s a small glimpse of some of their totally cool furniture.

I have to say that the only thing that seemed a little odd was the limited selection of boys stuff.  I mean, boys like to not match also but they do it in a not supposed to look good together kind of way.  So pretty much the only thing at LittleMissMatched for boys would be some socks and flip flops.  Then I realized “Oh, it’s Little MISS Matched, not Little MR Matched.”  But that wouldn’t make sense anyway because then the site would have to be a bunch of matching stuff.  That site already exists… it’s called (you name it…insert any store name here).  LittleMissMatched is really for girls – duh.

Miss M came home from school telling me how much she loves her pajamas and that her friends do too.And sure enough, when I finished laundry today, the first thing she asked was “Are those clean?”

Am I The Only Person Who Hates Shopping for Unmentionables?