It shouldn’t surprise any of you to hear that we’re a little technologically over-ambitious.  We tend to like the latest gadgets and gizmos, as well as gaming systems.  We’re generally frugal but we do save up to get those certain things that are on our want list.  I’ve mentioned before that we own a Wii, but I don’t talk too much about the fact that we also have an XBox 360.We’ve owned the 360 since its original release and I knew that it had an online feature.  While it’s typical use is for normal games, every once in a while DH would log on for a demo game or download something.  The one thing I do think is cool is the Media Center feature which allows us to run slide shows, watch streaming home movies from our computers and listen to music. 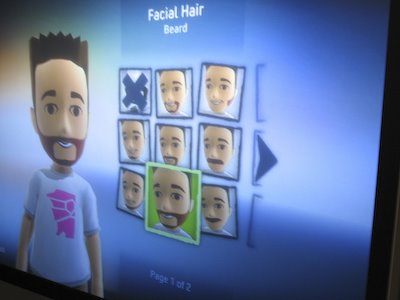 XBox recently did some upgrades to their system and have implemented some very cool features.  Among other things, their avatar creation puts the Mii creation to shame.  The degree of choices is unbelievable – right down to the type of clothes you want to wear! However the best part is that XBox has started cross-marketing to provide a more well-balanced system.  Well, this past month I had the opportunity to participate in a HouseParty for the XBox 360/Netflix venture.  It is a partnership that moves us another step closer to being an instant gratification society. (Like we aren’t already, right?)

Anyway… Several years ago, we subscribed to Netflix and received movies in the mail.  Once we watched them, we shipped them back and received the next one in our queue.  It was a cool program but we finally got rid of it when we didn’t have the time to watch as much.  Netflix has now taken the next step in technological evolution and is streaming their movies on the XBox 360!  If you have an XBox Gold membership as well as a Netflix account, you can log on and watch movies on demand.  No limit to how many, either.  The selection is not as good as their mailing program but I am certain it will improve with time.

As part of our HouseParty, we watched Alice’s Adventures in Wonderland.  Later, we had family movie night and caught “James and the Giant Peach” with the kids.  DH and I were also pleased to see the variety of documentaries that you don’t typically find on TV, including Spellbound (about the National Spelling Bee) and The King of Kong (about competitive videogaming.)  While the quality of “Dan in Real Life” wasn’t very good, we didn’t have a problem with any of the other movies we watched.  It was very simple to log onto Netflix and pick out a variety of movies as possible choices.  When we sat down with our remote in hand, we scrolled through until we found the one we wanted to watch.  Easy as pie.

Along with our package of goodies for the HouseParty came the XBox game “Scene-It?“.  Included was the game and four special controllers.  We played a few games of it and I realized that even though I have watched a lot of movies, I really am not good at answering trivia questions about them!  This was a very fun game and gave us a lot of laughs.

If you currently own an XBox 360, check out the new Netflix program or snag the Scene It game for the next time you have a party!