Home / Wellness / Health / You want to put a thermometer WHERE?!

You want to put a thermometer WHERE?!

It’s been a heck of a few weeks. Miss M has been sick – running a temp off and on for over a week. Miss K woke us up in the middle of the night last night with a fever of her own. It reminded me of a awesome product that I reviewed on epinions several years ago and I thought it appropriate to share here.

When I was pregnant with Miss M, my first child, I thought to myself, “Baby on the way… What do I need to buy?” Layettes, onesies, bouncy seats, binkies, bottles, pumps… Brain. Turning. To. Mush. I had NO idea what these things were and no idea where to start. To establish my registry, I enlisted the help of a Jacque, a good friend and coworker (and seasoned mom). She accompanied me to Target and proceeded to point out the things I REALLY needed – justifying why I didn’t want this versus that.

When we got to the section on thermometers, she explained that the ‘ear’ thermometers were tons better than both the oral (which couldn’t be used on an infant) and rectal ones. Ear thermometers had been on the market for a few years and had become the norm for baby registry wish lists. But my friend said they weren’t without flaws. Her biggest problem is that her child always fussed at having the probe put into his ear because you had to tug on the ear a bit to get it to read correctly. If he was sleeping, taking his temperature was a sure-fire way to wake him up.

I remember it so clearly, standing there examining the array of thermometers. She was about to tell me what she recommended when she spotted the Exergen Temporal Scanner. I could see the quandary in her eyes. She had never seen the temporal scanners so she couldn’t give any advice on it. But from reading the package, thought it was probably the best option out there.

How it works: You hold it flat against the middle of the forehead, press the button and run it across a specified artery on the side of the forehead. BOOM. You have your reading. It scans kind of like a video camera – taking temperates at a rate of 1000 ‘frames’ per second. I’m not going to babble about the science behind it, you can watch a video of it or check out the FAQ on their website.

I have to admit that the only problem I have with it is that you have to hold the probe flat against the forehead. My husband had it down pat from the first try, but I guess I just don’t have as steady a hand as him. With practice, it got easier. Actually, Miss M who is currently 5.5 years old is able to take her temperature without any assistance. Would you allow THAT with any other thermometer?


Price: It’s comparable to standard ear thermometers. When I purchased mine, it was around over $50. I’ve seen them as low as $30 these days.
Availability: I’ve spotted it at several major retailers including WalMart, Target, Sam’s Club and Walgreens. And of course, Amazon.
Benefits:
It is extremely quick. As quick as it takes to get from the middle of the forehead to the side (which on a baby is pretty quick!)
It can be used on adults also. Oral thermometers seem to take forever. Plus, I usually JUST had something to drink when I realize I need to take my temp.
It doesn’t require any kind of thermometer ‘cover’ or disinfecting. It doesn’t come in contact with bodily fluids, so you can check one person after another without delays. There is a cap that comes with it to cover the sensor on the end, but that’s really like the lens cap on a camera. Has nothing to do with sterility.
Auto shut off.
Mine was a baby shower gift from Jacque almost 6 years ago. It holds up well and we actually purchased a second one that we take with us when we travel. 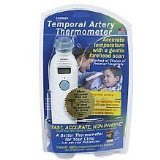 Now, whenever I attend a baby shower, the Exergen Temporal Thermometer is my gift of choice. Even when it isn’t on their registry. It’s non-invasive so you can even get a temperature while your child is sleeping. It’s so quick that it isn’t a fight about how long someone has to hold still. And it’s extremely accurate. I’ve often brought mine to the doctor’s office to compare temperatures.

This thermometer is great for use on sick babies (of all ages)… and you don’t have to worry about inserting it anywhere.

2 comments on «You want to put a thermometer WHERE?!»