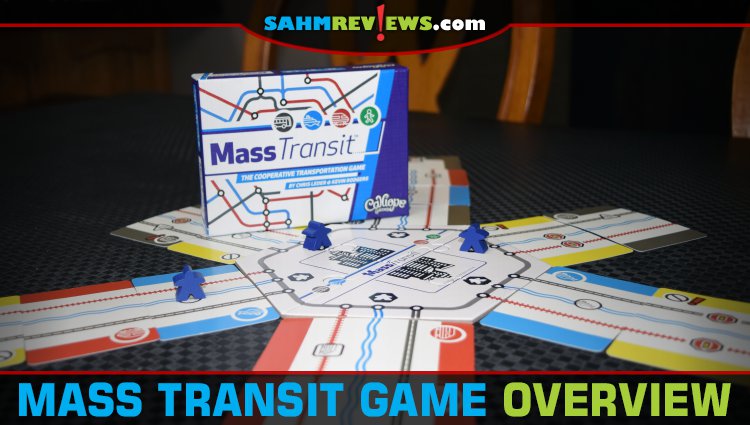 I’ve had a lot of opportunities to travel as a result of this website and I like to think I know a think or two about navigating my way around. Adapting to ridesharing serves like Uber and Lyft took a few times before I felt confident with the process. I’ve come to accept the chaos of big city freeway systems, including tolls. Security checkpoints at airports may be cumbersome, but if you remember to do all the things (remove liquids and electronics from carry-on, take off shoes, empty pockets, etc.) then it’s really not that bad. But no matter how many times I travel, New York City mass transit always puts a knot in my stomach. Is this the correct train and is it going the right direction? Will I remember which stop to get off? It’s agonizing for me and that anxiety translates to fun at the game table when I play Mass Transit from Calliope Games.

Thankfully, the everyone is working together during Mass Transit so it’s not any different than other cooperative games that we play – and enjoy. Shuffle the cards and deal four to each player. Create the central transit station by assembling the four piece puzzle. Place one commuter on each of the designated spots and you’re ready to try to get them home!

What’s interesting about Mass Transit is that everyone has the common goal of transferring the commuters along the rail, water and bus routes to their suburb. But nobody is allowed to give details about what they plan to do. You can indicate that a commuter might enjoy the scenic boat ride, but you can’t say, “Make this one a water route and that one a rail.”

The cards each depict the three modes of transportation while also showing a symbol on the top left. On your turn, you’ll play at least two of your cards. They may be played to the board for their routes or to the discard pile to move a passenger.

Of course, mass transit isn’t easy so be prepared to run into some hiccups along the way. Commuters can walk, but only one card at a time. As an alternative, they may move across multiple cards by transferring between stations. Traffic lights on the route require you to stop so plan accordingly to have additional movement cards on hand to get past that. Other cards may display an exclamation point which means those must be played during that turn and may not be held for later rounds. At the end of your turn, you’ll draw back up to four cards.

Pay attention to the number displayed on the various suburb cards. These indicate the number of cards that make up the commuter’s route before that card can be placed. So you may have a suburb card burning a hole in your hand, but if you and your team haven’t made the route long enough then you cannot play it. In addition to not being able to communicate with each other, dealing with traffic hazards and the distance to the suburb, you are also limited by the number of cards in the deck. If you aren’t able to get all the commuters home by the time you run out of cards then you fail. Shuffle up and try again because those poor commuters need a good night’s sleep!

The concept of Mass Transit is easy but the communication limits ensure you won’t win every time. If you’re ready to give it a shot, grab a copy of Mass Transit off Amazon, direct from Calliope Games or from your local game store. Watch our How to Play Mass Transit tutorial video on Facebook Reels (or Instagram) to get quick walk-through of the game. Transport yourself to Facebook, Instagram or Twitter to hear about Calliope Games’ latest news and projects!

What’s your favorite trick for navigating the mass transit systems?