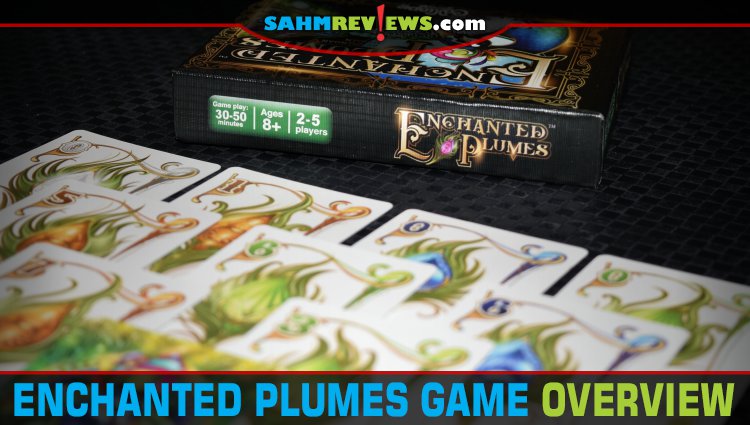 Our gift guide to Stocking Stuffer ideas is full of small-box games that would make any kid (or adult) happy. We’re so used to getting fruit and candy in our stockings that many times it is a huge surprise when something non-food related is dropped off by Santa Claus. While each of our recommendations would be perfect hanging from the mantle, let’s take a further look at Enchanted Plumes by Calliope Games. It might just tip the scales when you’re making your last-minute purchasing decisions.

Enchanted Plumes is a beautifully illustrated card game for up to six players. Your goal is to build colorful peacock plumes with greater card values than your opponents. Start by removing feather cards from the deck according to the number of players. Then shuffle the entire deck, leaving out the one Peahen card. Deal out nine cards to each player, who will then choose six to keep. The unused cards are returned to the deck, which is shuffled again. Mix the Peahen card into the top seven cards and put those at the bottom of the deck. This special card will signify the end of the game. Five cards are dealt out in a line next to the deck forming the Train.

On a turn a player will play one or two cards from their hand into a personal plume in front of them. There is no limit to how many plumes you may have, nor how large they may be. The first row of cards is the top-most row of feathers on your peacock and will count as negative points at the end of the game. All other rows will be totaled as positive victory points.

After playing your cards, you will draw back up to a maximum of six cards in your hand by taking up to two from the Feather deck. Or you may draw one and then swap one from your hand for a card in the Train. Lastly, you could choose to swap for two in the Train, which will leave you with fewer in your hand to work with. Play continues with the person on the left of the active player in the same manner.

There are ten distinct colors of feathers and keeping track of what is available is necessary for success in Enchanted Plumes. When playing cards to your plumes, you may only play in the active row or lay one to start a new plume. The first row may have as many cards as you like, but once you play one to the second row, you may not lay any more on the top. That row must then be completed in its entirety before you may advance to the next row. You may play a card of any numerical value but must only play colors that appear in the row directly above it.

If you manage to complete a peacock’s plume by tapering down to just one card, that last valid card played is turned over to the peacock side, locking the entire plume. Any further cards must be played in a different plume. Once the Peahen card is drawn from the deck, play immediately ends and scores are tallied.

Sum up the face values of any cards in the top rows of your plumes. These are negative points. Then add the face values of all cards in lower rows. If you have completed peacocks, add one point for each card used to make the plume, including the negative ones. Your score is equal to the total value of all your plumes plus any peacock bonuses. The person with the highest overall score wins! Ties are broken by whoever has the most completed peacocks, and if still tied, the victory is shared.

Grab your copy on Amazon in time for the big holiday. If they sell out, which is very likely this time of year, you can also get your copy of Enchanted Plumes direct from Calliope Games on their website! As always, be sure to follow Calliope Games on Facebook and Twitter to find out what else they have in the works for 2022!

What is your favorite bird and why is it a peacock?