Whenever we visit Nicole’s brother and his family, it is inevitable a game will be played. If only adults, a deck of cards is enough for a session of Spades or something similar. If the kids are involved, their favorite is Pirate’s Dice. This is a version of the popular Liar’s Dice which has been in existence since the 1800’s (Perudo). It’s always interesting to see how family members interact when asked to lie or bluff, especially when the kids are dealing with their parents.

We’ve recently been enjoying a new pirate-themed game by Big G Creative that introduces a different type of risk/reward for telling a lie. In Bluffaneer, instead of betting with dice and potentially losing them, players are wagering with gold coins. Only the pirate who can hold on to the most when another runs out will be the winner. 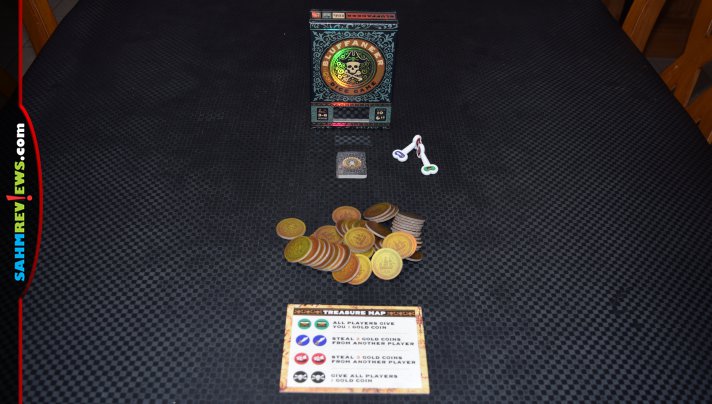 Inside the Bluffaneer box are 48 thick cardboard gold coins, two custom bone dice, a treasure map (player key) and a deck of 18 tiny cards. Each pirate begins the game with ten gold coins and one card dealt to them from the shuffled deck. The treasure map key is placed in the center of the play area while the empty box is kept close by as a discard place for gold coins. If playing with the maximum number of participants (six), each person begins with only eight coins. 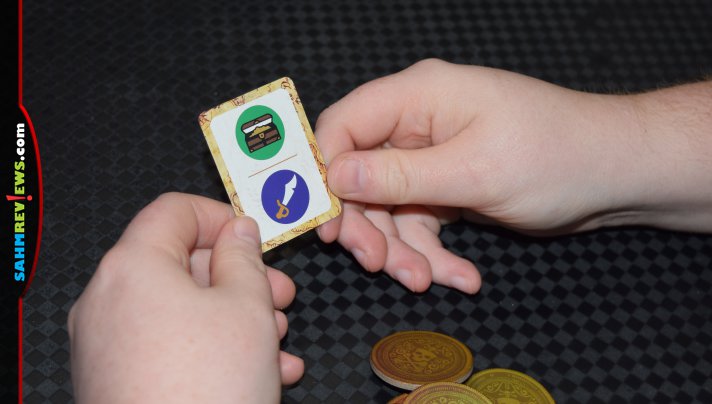 Pirates may look at their dealt card but should not show it to anyone else until the right time. This card depicts two symbols which match those on the dice. The starting player will roll the two dice and examine their results. If doubles are rolled, the treasure map is consulted and followed. This means giving other players some of your coins, receiving from them or even stealing more from a single player! When the roll is not doubles, everyone compares the images to those on their own card. 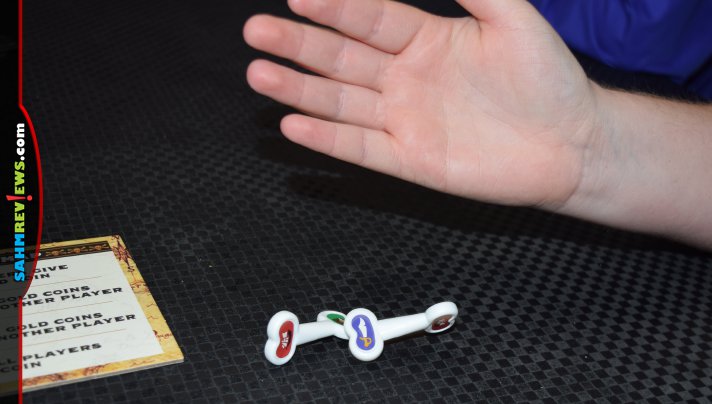 If the icons match the active player’s card exactly all other players must discard one coin to the box. The active player will then discard their card and draw a new one since they must reveal it to prove the match. If the dice match any of the other players’ cards, they may exclaim “Gimme Yer Booty!”. But…that player may be bluffing about the match! It is up to the active player to decide whether to challenge their claim. 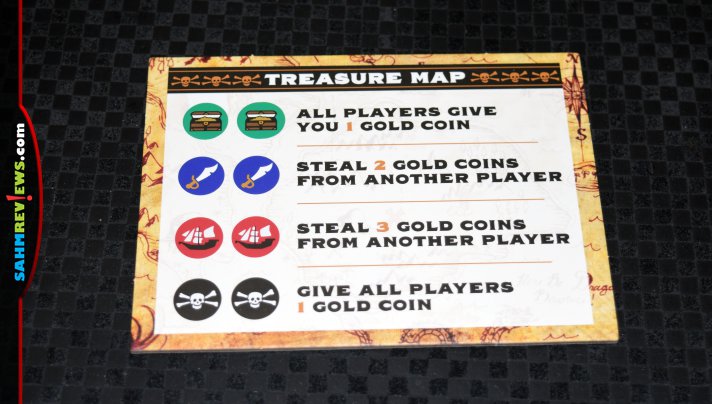 Play proceeds in clockwise order until one person runs out of money. At that point, the remaining player with the most gold is the winner of Bluffaneer! Because the game ends immediately when someone runs out of coins, pay special attention to whom you are stealing from. You might not want to accidentally end the game by forcing a player out when you don’t have enough coins to win.

The only complaint we have with Bluffaneer is how the game suggests you handle ties. There is a rare case where more than one non-active player may have the same card and both yell “Gimme Yer Booty!” at the same time. The rules require one of them to flip a coin with the other calling heads/tails. We’re not a fan of this non-strategic solution and suggest the active player simply challenge or pay both players.

This also comes up at the end of the game when one player is eliminated. The rules again suggest a coin flip if players are tied for most money. This is an anti-climactic ending and is not effective at all when more than two players have the same number of coins. Since Bluffaneers supports up to six players, it is possible to have as many as five players tied! And the more players you have, the more likely ties will happen, and this will be an issue. There needs to be some type of instant-death round among the tied players which incorporates strategy and doesn’t make the win dependent on the luck of a coin flip.

Criticism aside, Bluffaneer is an interesting variation on the idea of a pirate bluffing game. The price point is fantastic at $9.99 at Target. The size of the box makes it easy to travel with. That is, whenever we get back to travelling somewhere. If you’d like to learn more about Bluffaneer, check out the product page on Big G Creative’s website. If you’re curious about what games they have in the pipeline, make sure you’re following them on Facebook and Twitter then enter the giveaway to win a copy!