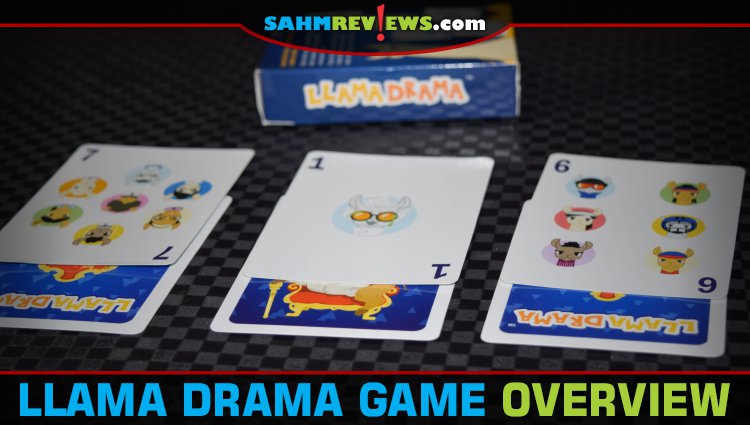 When my daughters were much younger, one of their favorite paperback books was the Llama Llama series by Anna Dewdney. The first book (of 37!) released in 2005. Coincidentally, the first entry for the term Drama Llama in the Urban Dictionary was in April of that same year. Now, the term is part of our everyday vocabulary!

A couple of years ago, first-time publishers, Yashar Brothers, created a card game with a similar name – Llama Drama! We’ve been enjoying this quick, easy-to-learn game during our quarantine even though we haven’t seen a live llama in ages. 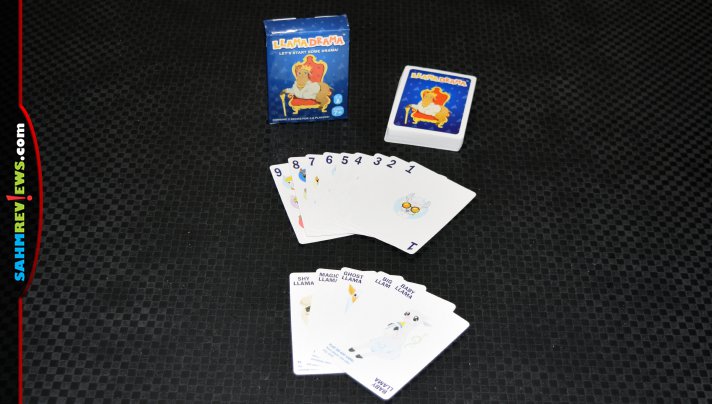 Llama Drama is for 2-4 players or you can combine multiple decks to accommodate up to eight. Shuffle the deck of 56 cards and deal out five to each player to form their hand. Also distribute three cards to each person face-down and another three on top of those face-up. The rest of the deck is placed in the center of the play area and forms a draw pile.

Players will take turns in clockwise order playing cards from their hand onto a play pile next to the draw deck. The first player may play any card or sets of the same card to the pile, since there was nothing there to begin with. Subsequent players must play a card or card sets that match or are of a higher value than the top-most card.

At any time, if four cards of the same number or face (special cards, which will be covered in a minute) are played in a row, the entire stack of cards is moved to a discard pile. The person who played the fourth example of a card which triggered this event then takes another turn by playing any card to the now-empty play pile. At the end of your turn, if you have fewer than five cards in your hand, you will draw cards until you have five.

On your turn if you cannot play a valid card, you must pick up the entire stack of cards in the play pile and add them to your hand. This also ends your turn. There are special face cards which will help to prevent this from happening. Baby llama cards act as wild and may be played on any card. The next player may also play any card on top of it. 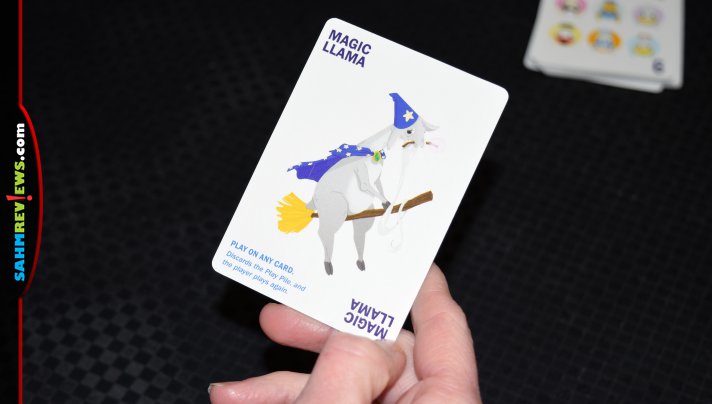 Shy llama cards may also be placed on any card, but the following person may only play cards 1-4 or another special llama (except for the big llama). Big llamas may be played on any card except for the shy llama. Magic llamas act just like a fourth example of a regular card, triggering the discard of the entire play pile and allowing you to take another turn. Lastly, a ghost llama card is treated as invisible. The next player must follow the criteria of the card underneath it in order to make a valid play.

Eventually the draw pile will run out. Your objective is to be the first player to get rid of all of their cards, including the six in front of you. Once your hand is empty, you must begin playing the face-up cards. To play a face-down card, all face-up cards must have been used already. You will flip one over on your turn and if it can be played legally, you will do so. If you cannot make a valid play, either using face-up or face-down cards, you will play one at random to the play pile and then take the entire stack into your hand again! The first player to play all of their cards wins Llama Drama!

There is a little bit of strategy involved when playing from your hand as to which card or set to get rid of first. Once your hand is empty, you’re left to the luck of the draw. A few lucky flips and you’ll be the easy winner of Llama Drama. You can find copies of this inexpensive card game on Amazon or ask for it at your favorite local game store. Follow them on Facebook to learn more about their themed versions of Llama Drama or check out some of their YouTube videos for a more thorough tutorial!

Have you ever seen a llama in person?