If you’ve followed my Hues and Cues adventure so far, you know I used to be a partial owner of a printing company. The inspiration for my game came from the daily chore of discussing color with customers who weren’t in the graphics industry. It became a regular topic of conversation on how everyone’s perception of blue jeans was different (acid wash anyone?).

Specifically, our company manufactured plastic cards. The type that hold money or credit. Security was always an issue, especially once gift cards became popular. That one little text file that contained 100’s of thousands of account numbers needed to manufacture the cards would have probably been worth a fortune on the black market. With that floppy disk, someone could easily make counterfeit gift cards by grabbing one off the shelf and re-encoding the magnetic stripe.

I’ve always been fascinated with currency manufacturing technology, including credit cards. When we learned of a new game by Quined Games about counterfeiting paper money, we knew it was one we needed to try out. Counterfeiters is a worker-placement game set in a world of anthropomorphic animals who are all vying to see who can become the richest by printing their own money! 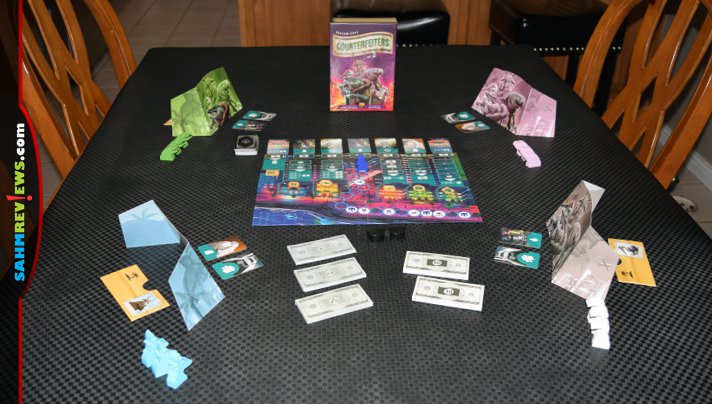 This small-box game supports 2-4 players and plays in well under 45 minutes, much quicker than other games of this type. To set up for a game of Counterfeiters, simply place the board in the center of the play area, taking note of which side you use (determined by the number of players). Sort the two money types (real and fake) by denomination or quality, respectively. Place the police officer pawn on the space of the track matching the number of players. This is the “timer” for the game. Each player takes three wooden henchmen (henchanimals?), a player screen and envelope in a matching color. Choose a first player and distribute starting cash according to player order. Everyone also begins the game with a printer and one random ingredient needed to make the fake cash. Additional component cards are shuffled, with seven dealt out across the top of the board. 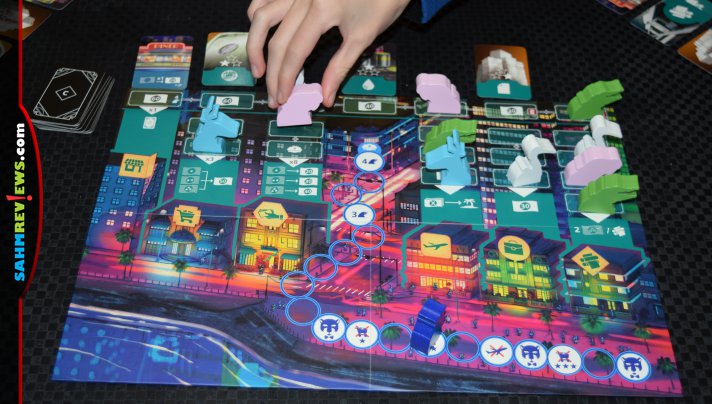 Counterfeiters is played over rounds which consist of all players taking turns placing one of their henchmen onto one of the unoccupied action spaces. You can choose to go to the black market to buy additional supplies or upgrades by paying the price listed on the board. 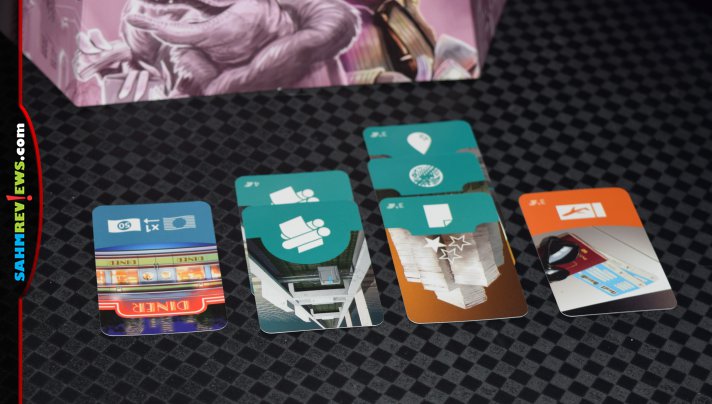 Supplies are not actually purchased – think of them as access to a contract. They are unlimited supply and are never depleted. There is never a need to buy a second example of a supply item. You’ll find ink, paper, holograms (rare), a private jet, additional printers, lottery tickets, diners and of course, lawyers.

You might also elect to print some fake banknotes as an action. For each printer you own you will receive two counterfeit bills. The quality of the note is determined by how many different components you have purchased contracts for (1, 2 or 3). This is a very nice touch in that the fake bills included with the game nicely simulate different levels of quality in addition to regular markings! 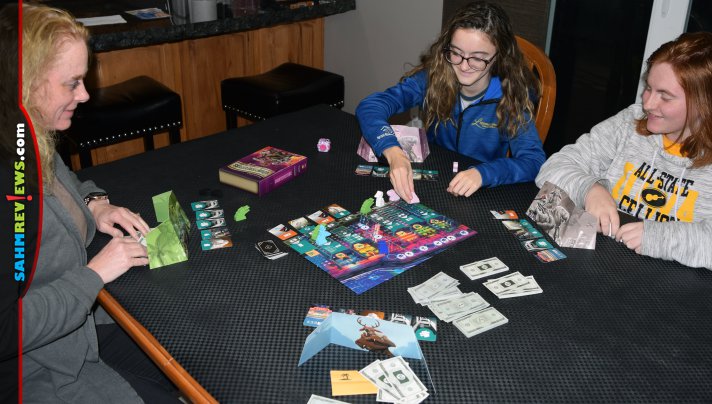 You can pass off fake money at the supermarket, up to three at a time and receive real money as change. If you prefer, you can sell them for a cheaper price to a receiver who pays a rate according to the worst quality bill you provide. On the plus side, they will take up to eight notes at a time!

All players are criminals to begin with, so the fifth possible action should be of no surprise – tax fraud. This is an easy way to get $30 from the bank. Lastly, you can fly to the Caribbean to try to hide your real money. Why is this necessary? Remember the police officer? He will move down his track, triggered by actions on the board marked with a matching icon. When he gets to a space with the Godfather on it, everyone must surrender half of the real money in their possession. Anything hidden off-shore is safe! 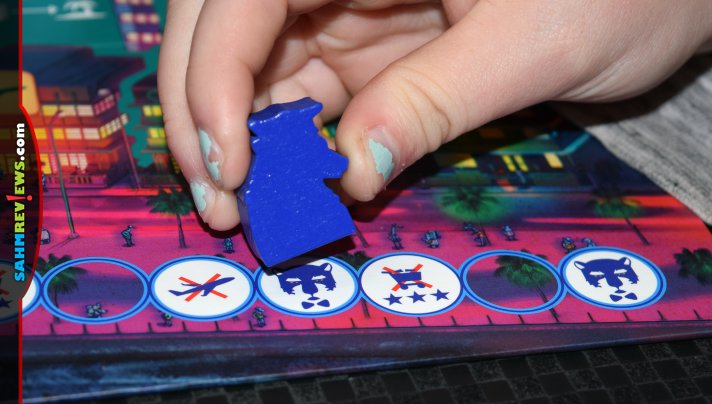 The other main space on the officer track is the one that starts a police investigation. When this happens, the worst-quality fake currency in play is no longer valid at the grocery store because the police have trained them on what to look out for. The only way to move it from that point on is with the receiver (who pays less). 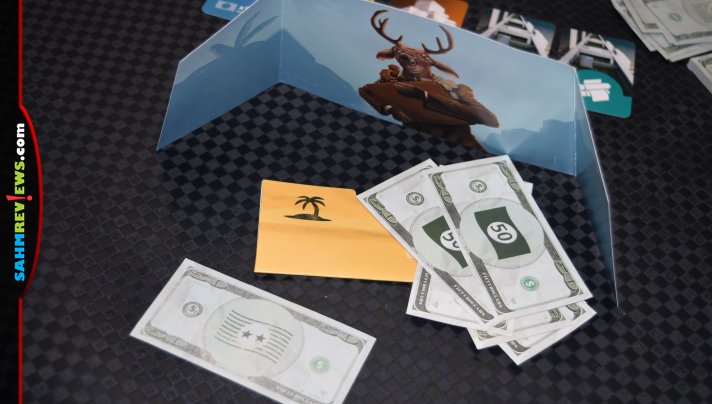 A round of Counterfeiters ends once everyone has played all of their henchmen. The black market is adjusted and refilled, everyone takes their henchmen back and anyone who owns a diner may convert one fake note of any quality into a real one. When the police officer reaches the final spot on their track and the Godfather collects his money, all players will take one additional turn if they have one available. Players holding lawyer cards may use them to remove a henchman from the board and take another turn! After all turns are complete, the player with the most real money in front of them, added to the money in their off-shore account and the value of lottery tickets is the winner of Counterfeiters!

The most surprising thing about this game is how quick it plays, but doesn’t feel like a light game. There are strategic decisions to be made and it leaves you wondering how you could perform better next time. If you’re a fan of worker-placement games, Counterfeiters is definitely one you’ll want to try. Pick up a copy at your favorite local game store or from Amazon with Prime delivery. Find out what other games Quined Games has printed by checking out their website and social media feeds (Facebook, Twitter). You can also find out more from Capstone Games, their U.S. distributor.

Have you ever held a counterfeit bill?