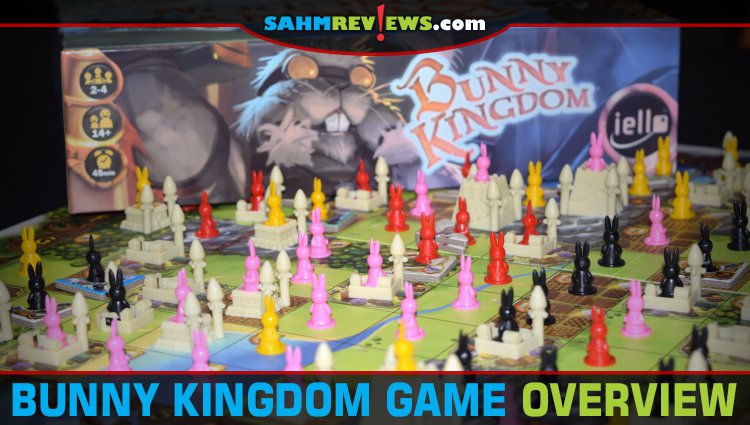 Most people understand the phrase, “It’s like herding cats.” It takes a bit of skill and luck to figure out how to wrangle them into one place. But have you ever tried a similar feat with other critters? Like bunnies, for example. A couple years ago a mamma bunny decided to dig a nest into our front yard and one day the babies got loose. We gloved up and attempted to round them up, but it took four of us and a bucket to put them in. I was reminded of this because we discovered last week that we have another nest. So what did we do? Played a rabbit-themed board game, Bunny Kingdom from IELLO! And boy, it sure feels accurate. 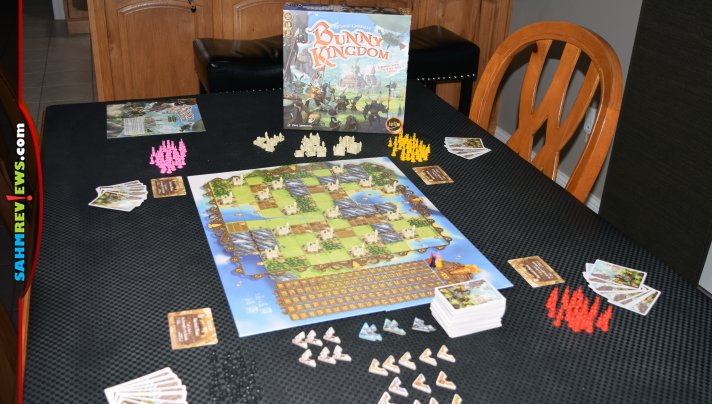 In Bunny Kingdom, you’re playing as Rabbit Lords who working on behalf of the Bunny King to conquer new lands. Or in our case, conquering our front yard. The game consists of a board, cards, 36 rabbit meeples per player, building tokens and city figures with either one two or three towers (representative of their strength). To begin the set up process, place the board in the middle of the table then add a Strength 1 city on each designated space on the board. Select a color then take the 36 rabbit figures, adding one on the scoring track and setting the others in front of you, Create a general pool of the tokens (Farms, Sky Towers and Camps) as well as the excess city figures. Shuffle the exploration cards and deal 10 (or 12 in a 3-player game) to each person. 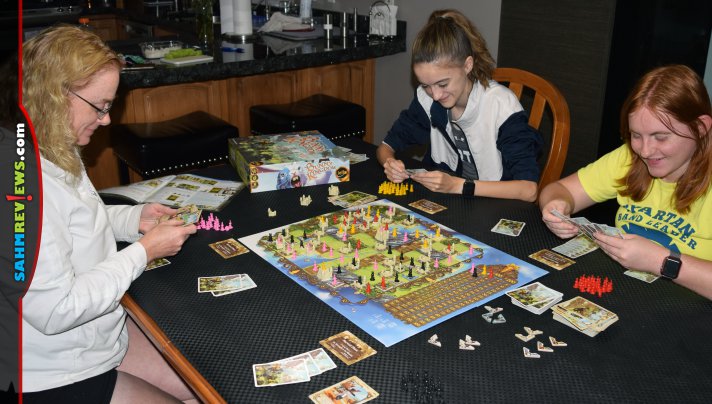 A game of Bunny Kingdom consists of four rounds with each containing three phases (Exploration, Construction and Harvest). The world board is divided into equal spaces consisting of different territories and are identified by grid coordinates. Each type of territory produces a unique resource that may be claimed during the harvest phase each round. Sea and forest spaces produce fish and wood, respectively and carrots come from fields. 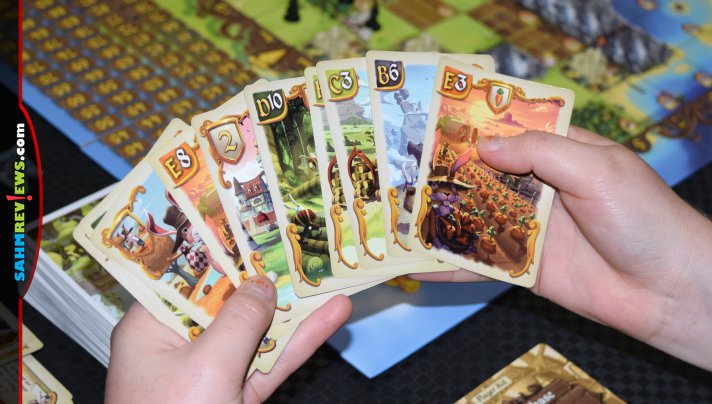 The Exploration Phase begins each round where players simultaneously draft cards and choose two that will be played during that step. Place them face down in front of you then set the remainder of the stack in front of your neighbor (left or right alternates each round). 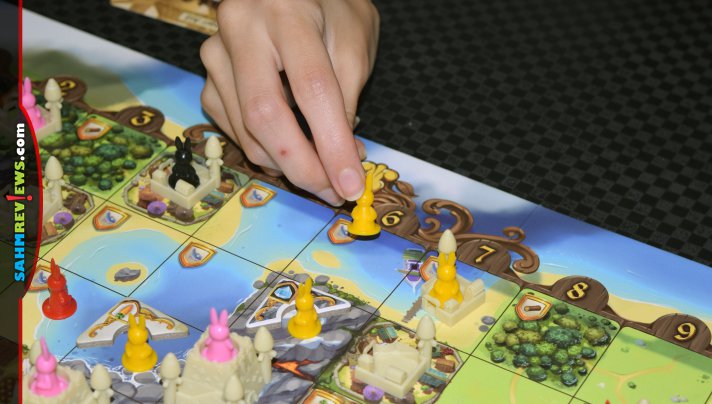 Next, players take turns playing the cards selected in the first step. There are different types of cards that all have unique abilities. The bulk of the cards in the deck are Territory cards that allow you to place one of your rabbits on the Territory shown. These areas on the board are referred to as a Fief. 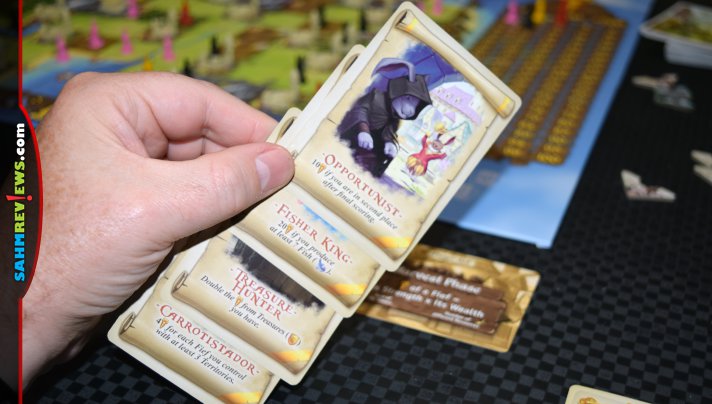 Parchment cards are set face-down in front of you and will come into play at the end of the fourth round. These vary from providing carrots for meeting specific goals to copying the parchment of one of your neighbors. Additional cards allow you to claim additional cards, put a City or token (Farm, Sky Tower or Camp) on the board during the Construction Phase. 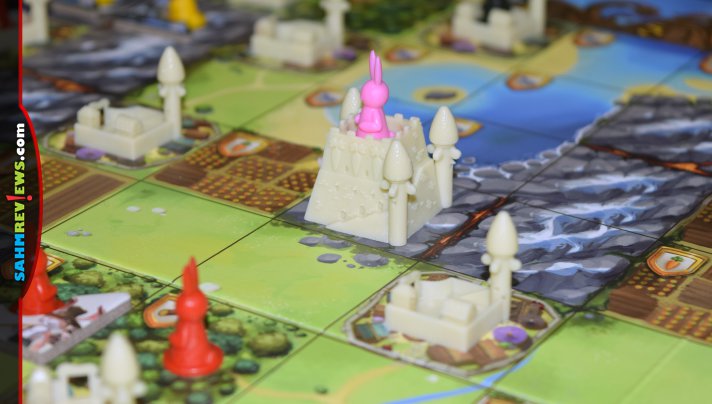 Repeat this process with the cards you received from your neighbor. Once you have completed the Exploration Phase, it’s time to move on to the Construction Phase. If you selected a City or Token card during the Exploration Phase, now is the time to add it to the board on one of the Territories you control, also abiding by the card restrictions. Cities increase the strength of your Fief while Farms increase your wealth. Sky Towers connect territories that are on different parts of the board and Camps allow you to take control of an empty territory. 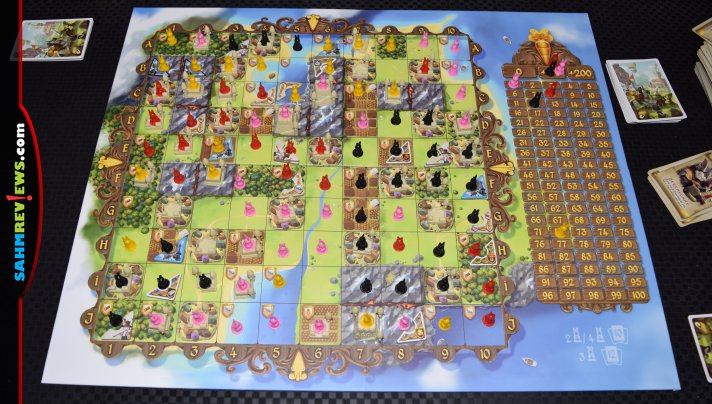 After construction has been completed, it’s time to harvest! Collect carrots from all your Fiefs using the following calculation: Strength times Wealth. As you recall, wealth is based on the number of DIFFERENT resources within its limits and strength is created by placing cities. Move your bunny on the scoring track accordingly for each of your eligible Fiefs.

Repeat these three phases for a total of four rounds, then reveal Parchment cards and do final scoring. The bunny who has collected the most overall carrots earns the title of “Big Ears”. Bunny Kingdom is an excellent game for grasping the ideas of both card drafting and area control. Go down the rabbit hole of all the awesome games in the IELLO lineup by visiting their website and social channels (Facebook, Twitter, Instagram). Pick up a copy of Bunny Kingdom on Amazon, direct from IELLO or ask your local game store about availability. Chase the carrot down to the giveaway widget to enter to WIN a copy of Bunny Kingdom AND the Bunny Kingdom in the Sky expansion!