Scott and I seldom did touristy stuff in our decade-ish of living in Los Angeles. We both worked a lot hours then he added a long commute and trade shows on top of that. Our “vacations” typically involved an extended weekend that involved me flying to meet him in whatever city as he was wrapping up a trade show. We made exceptions when family would visit us from out of state and were able to enjoy Disneyland, Hollywood, tapings of TV shows and the beach. It may have been during my parents’ first visit that we decided to tour some wineries in Temecula. I’ve never been one to crave a glass of wine, but it was a cool experience to learn about winery operations and sample several different types of wine.

This long-ago winery tour was resurrected in my memory when we played La Vina from Devir Games. As family members of a deceased vineyard owner, you’ll compete to revive a plot of vines that has fallen into neglect. The will states that the individual who is able to get the best yield from that plot will inherit the entire vineyard. You’ll earn prestige by harvesting different varieties of grapes and fulfilling orders at wineries.

La Vina consists of a small game board that represents the main aisle of the vineyard. They are two-sided, modular pieces consisting of two boxes per space. The length and which side are determined by the number of heirs vying for the vineyard. Place it in the center of the table. Shuffle the deck of grape cards and distribute two cards in each space on either edge of the vineyard then put the deck on the outskirts of the play area.Give each player their selected color piece, corresponding starting baskets and barrels based on the player count. Add winery cards, prestige tokens, tools and baskets according to the instructions. 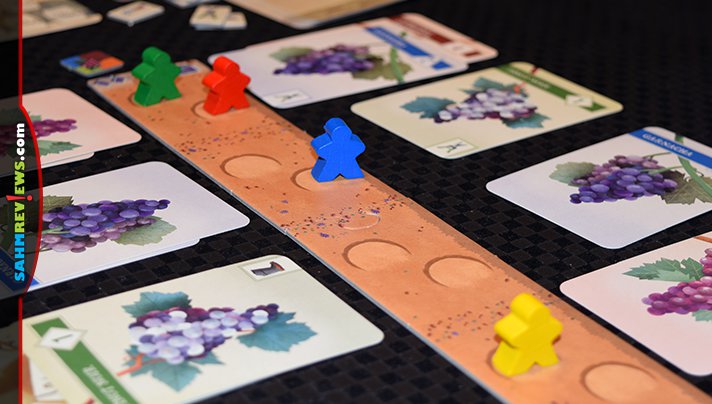 On your turn, you must move forward at least one space and may not share a space with anyone else. As a result, you’ll constantly be leapfrogging over one another. As I previously mentioned, each space contains two boxes. Even if the box in front of you is open, you may not move there unless it’s on the next space. It’s not a long track so you’ll find that moving through the vineyard is a quick process.

When you land on a space or before you leave your current one, you can take one of the available grape cards. There are four total, two on each side of each box, but two are covered so you cannot access those unless you have the proper tools to do so. You may discard the card or place it in your basket. If it displays a tool, you may take that. Billhooks allow players to take any of the four cards at a box. Shears allow players to take two from the same space. A card from the space before or after the player’s landing location is available if you cash in a Boots token. You may only possess two tools at a time and both can be combined. 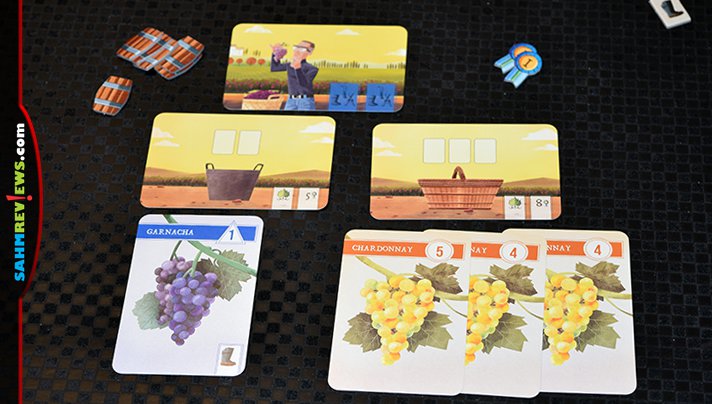 Baskets only hold a certain number of grapes so you have to be cautious on how many you select and load. Of course, there are opportunities to purchase bigger baskets if you feel like you’re struggling with the current ones. Grape cards cannot be moved between baskets so pay attention to what the wineries are wanting to purchase so you can combine your grapes accordingly. 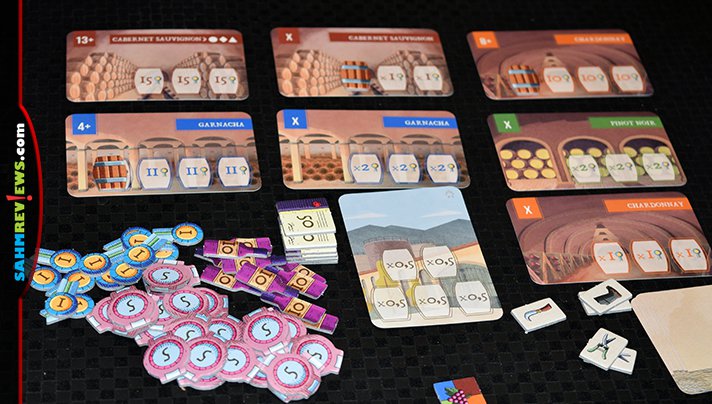 At any point, you may opt to exit the vineyard. The first player of each round will earn a wild grape token to use at any point for the remainder of the game. It doesn’t take up space in the basket either. When you exit, you may make one or two grape deliveries. Each basket is delivered independently of one another – and completely – according to the requests on the winery cards. Some only want one type of wine while others will allow mixed grape varieties as long as the majority come from the named grape type. You’ll earn prestige points based on what the wineries are willing to pay for your delivery. 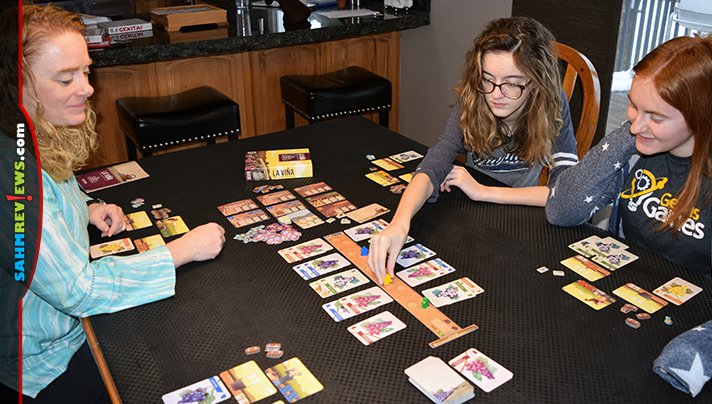 When everyone has exited the vineyard, you’ll re-enter at the beginning in reverse order from what you exited. Begin a new round by adding a prestige token to each winery that still has open slots. Players continue the process of rotating through rounds. End game is triggered when a player makes a delivery using his last barrel counter. The player with the most prestige after all players have exited the vineyard is named as the owner according to the last will and testament.

La Vina takes about 45 minutes to play, but children as young as 8 can partake in this festive grape juice procurement game. Ask your local retailer about La Vina and watch for it on Amazon. See what else Devir Games is delivering by following them on Facebook and Twitter. Grab a glass of your favorite sparkling grape juice and enter to win a copy of the La Vina using the form below!