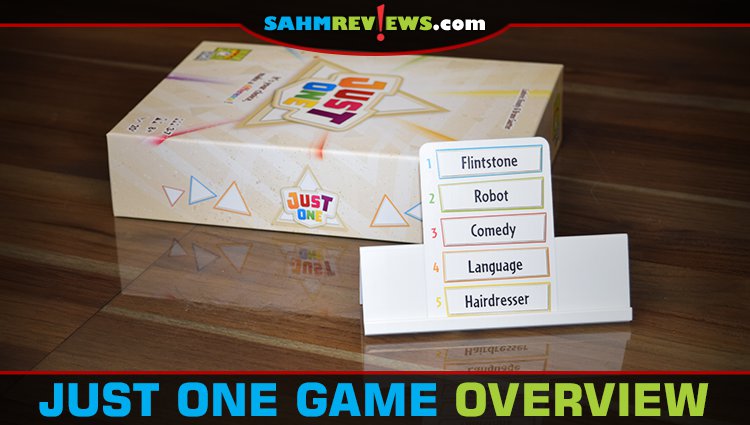 There are few better ways to spend Christmas and New Year’s Eve than to do so playing games with family, friends and even strangers. We spent Christmas week at a beach house relaxing, reading, soaking up the sun and playing games with family. Then when we returned home in time to ring in the new year, we were invited to join friends of friends (translation: complete strangers) for a game night in a conference room at a local hotel. While we typically stay home for New Year’s Eve and enjoy watching the ball drop with our daughters or playing games with neighbors, we decided to stop by the party to check it out. I’m glad we did because we were able to play some of the games we enjoyed at the beach, but with different people. 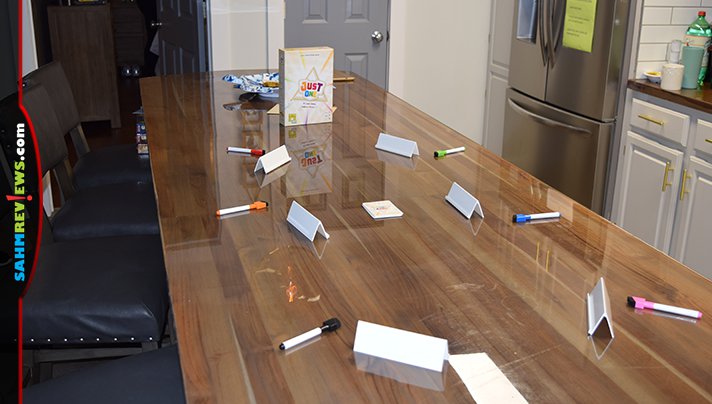 Sometimes we have games at home that are fun for our immediate family, but would be more entertaining with a larger group. Just One from Repos Production is the perfect example. Yes, you can play it with four people but it shines when you get more people into the game. At the beach over Christmas, we upped the player count to six when my in-laws joined in then hit the full compliment of 7 when we played on New Year’s Eve. Not only is it fun, but it’s easy to introduce to new people, including those who get overwhelmed by games with too many rules. To set up the game, all you have to do is give everyone an easel and dry erase marker then randomly select 13 cards and place in the center of the table to use for the current game. The rest of the cards are returned to the box which means you have lots of replay value in this! 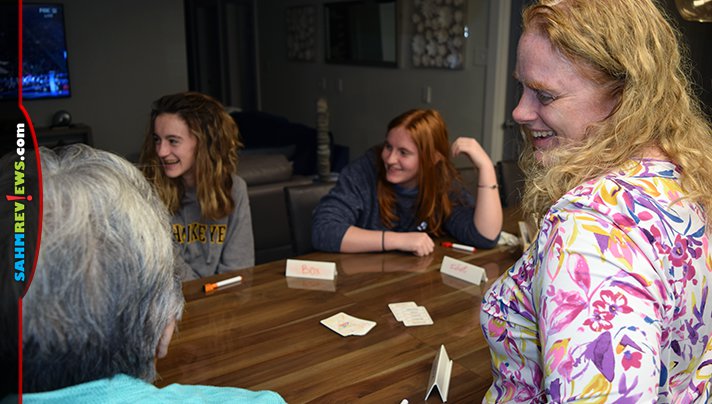 The concept is extremely simple. There are potentially 13 rounds; one round for each of the cards you placed in the center of the table. You are working together in an attempt to get the active player to guess a secret word. That player will receive clues from everyone at the table and they’ll get one guess to figure it out. I’ll explain the scoring in a minute. For now, let me step you through how a round works. 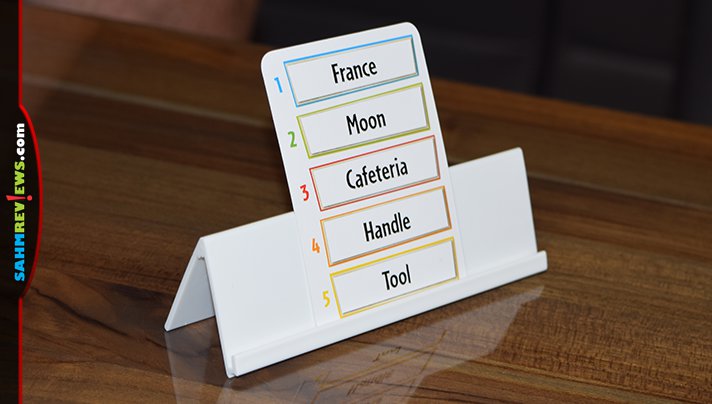 Players take turns being the active player. That person will take a card from the top of the deck and WITHOUT LOOKING AT IT will place it in their easel facing away. There are five words on the card, but the secret word is determined at random by the active player simply by saying any number from one to five. Now the active player sits patiently and waits for the clues. 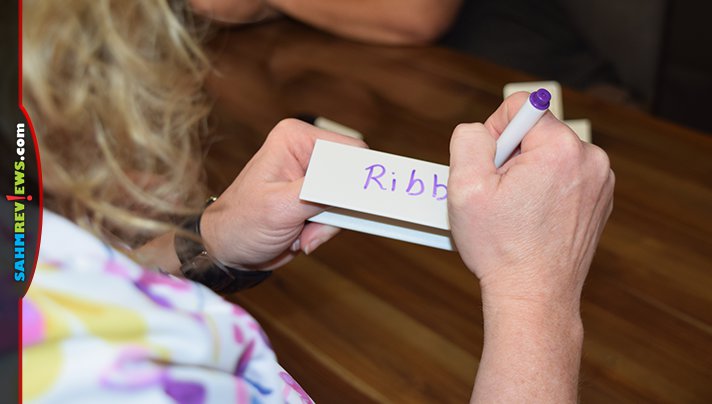 Like many word games, the rest of the players want the active player to guess the secret word. With Just One party game, everyone secretly writes a one word clue on their own easels. You can’t talk to each other about the clues, just simply write one word that you think would clue the active player into what their word is. Once you’ve done this, place your easel face down on the table. 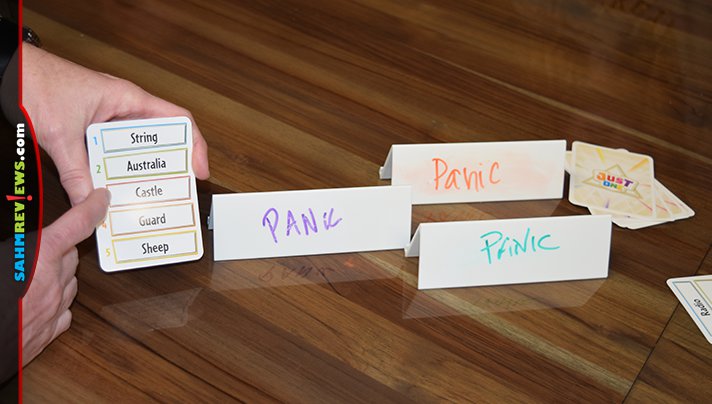 Once everyone has written their clue, the active player closes their eyes, turns around or walks out of the room while the remaining players compare their words. Here’s the kicker that makes the game so elegant: the active player only gets one of each clue. So when you are comparing clues, all duplicates cancel each other out and are turned face down. None of those will be shown to the active player! So when you’re writing your clue, you want to be unique, but not so obscure that it will impede the ability to figure out the word. 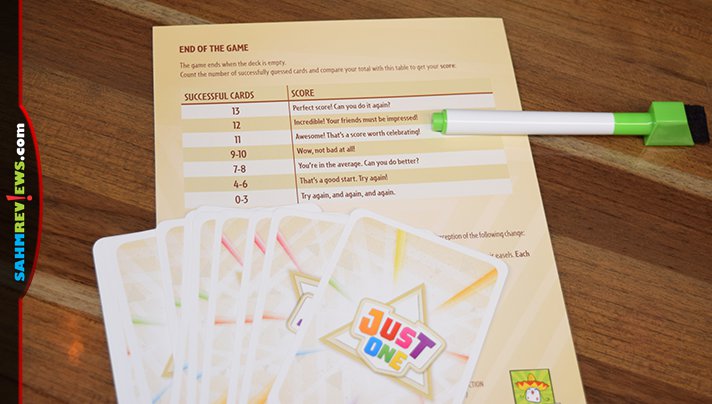 Once all duplicates have been eliminated, the active player is invited to look at the remaining clues and try to guess what the secret word is. Once again, they only get one guess so they’ll be trying to figure out what all the clues have in common. If they correctly determine the secret word, the entire team gets to keep the card for endgame scoring. If they are unsure, they may opt to pass and the card is simply removed from play. If they guess incorrectly, not only do they lose the card, but one additional! So there’s a potential for 13 rounds, but incorrect answers reduce the number of opportunities. Once the stack of 13 cards has been depleted, you consult the chart to see how the team did.

If the clues align, it’s easy to figure out the secret word, but seldom are you able to get a full compliment of clues that really paint a perfect picture. Players work to come up with unique clues and often end up duplicating with others who have done the same thing, all while leaving out the most important details. As an example, we all were trying to describe the word, pigeon, but nobody bothered to write “bird” on their easel. You’ll shake your head in disbelief as people match something you were sure would be original then laugh as the active player tries to decipher the garble that remains. This Spiel des Jahres (Game of the Year) winner is available at local game stores and retailers or find Just One on Amazon. See if you can guess what Repos Production has in the works by visiting their website and social channels (Facebook, Twitter). This game is worth having on hand for the next time you have a gathering of friends or family. Or in our case, complete strangers.

What’s your favorite way to spend the holidays?