I can clearly remember the first time we walked into a Marbles – The Brain Store location. Our girls were pretty young and we were shopping for items that would spark their STEM interest. There were science kits, puzzles, craft kits and board games! I don’t recall the final total, but we walked out of there at least a couple hundred dollars lighter.

Sadly, the last time we went to Chicago we discovered the Naperville location was permanently shuttered and we later found out this was the case for all of them. Yet another victim in the demise of brick-and-mortar retailers. Fortunately there’s a silver lining to this tale. Our friends over at Spin Master had purchased the rights to Marbles – The Brain Store‘s e-commerce division, renamed it to “Marbles – Brain Workshop” and would be offering their original line of games for the foreseeable future!

By now you’re probably wondering, “What type of games does Marbles – Brain Workshop” offer that I can’t already get at a big-box retailer?” Easy – Marbles offers their own line of custom board games, made with high-quality components and easy enough for nearly all ages. The majority of their product line are wooden games, which if you’re a long-time reader of SahmReviews, you already know that wooden games are among our favorites.

Here are a couple examples from their current line!

At first glance, Rock Me Archimedes reminded us of a couple games we have found at thrift over the years. Both Leverage and Yali utilize the same balancing mechanism. But Rock Me Archimedes is more than just a game of racing your marbles to the other end. It is a careful dance of balancing speed with leverage. And the game just looks better than the other two. 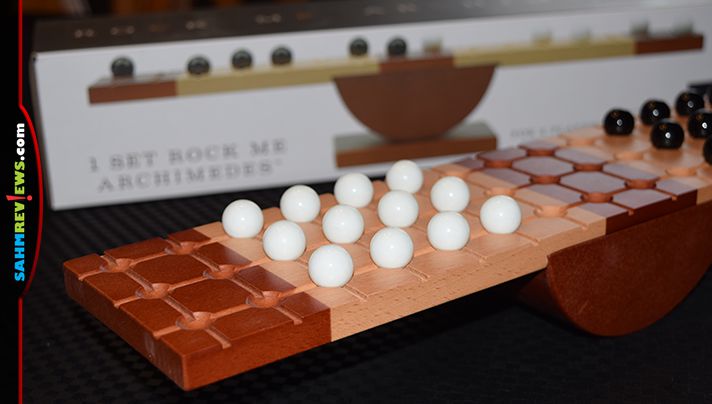 Each player begins with zero marbles on the balance board. On a turn you may do one of two things. Either place a new marble onto the board in the lighter tan area on your side or roll the included die and move an existing marble that many spaces. Your ultimate goal is to get four of your marbles into the opponent’s home space at the end of the other side of the board (the darker area). 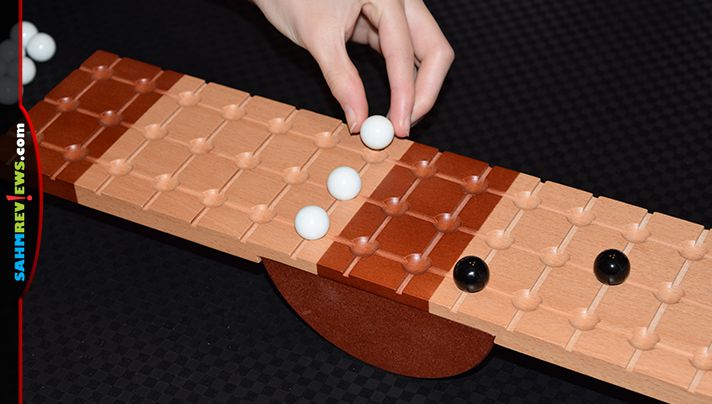 Moving is done orthangonally and you may change directions during a move and even move backwards. The die is numbered 1-3 twice so movement is slow. You can extend your movement by jumping over an opponent’s marble as long as there is an unoccupied space on the other side. 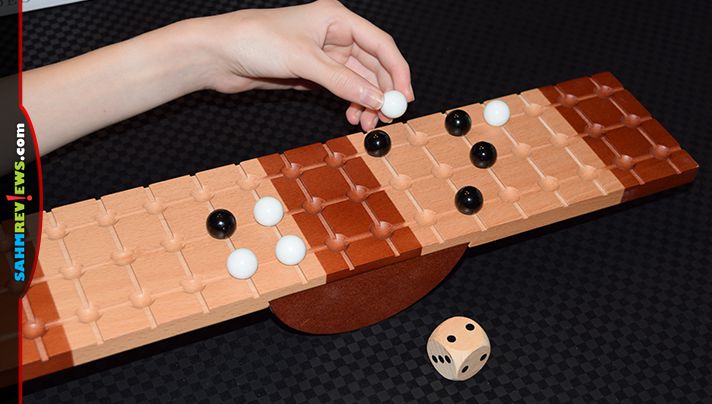 Here’s the kicker – if on your turn the board tilts far enough that it touches the table, you lose! You have to balance your strategy between rushing for the end and playing defense to counter-balance your progression. If your opponent has gotten far ahead of you, a viable strategy might be to place marbles on your own end and tilting the board towards you so that they cannot move forward without causing the board to hit the table! 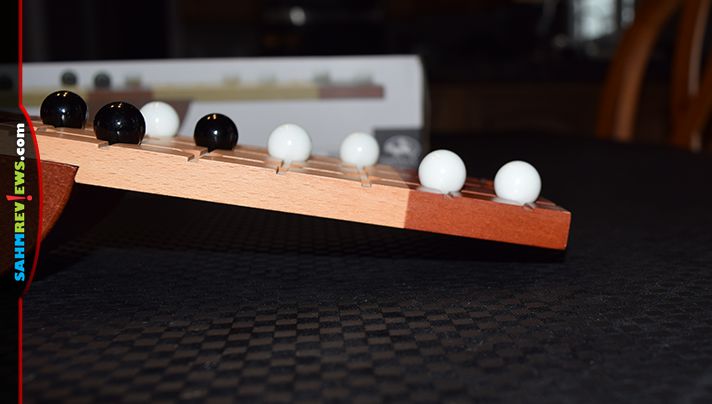 You can find Rock Me Archimedes on Amazon and direct from Marbles – Brain Workshop on their website for under $35.

If Otrio had been made in the 80’s or 90’s, it would have certainly been with primary colors like UNO Stacko or Tribulation. The color choices made by Marbles – Brain Workshop when they published Otrio were what originally attracted us to the game. Instead of bright yellow, blue, green and red, Otrio is colored in muted versions – soft red, sky blue, light green and medium purple. It just screams to be admired on a shelf, ready to play! 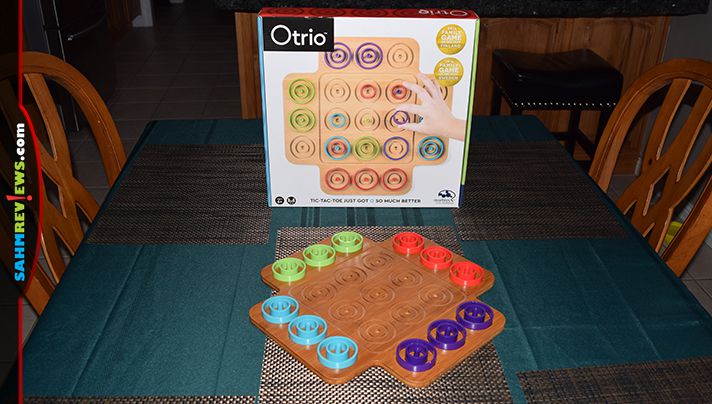 Otrio takes the classic game of tic-tac-toe and upgrades it for the 21st century. Similar to Gobblet, your goal is to get three in a row. But instead of stacking pieces on one another for control, in Otrio you use rings that might help you win in different ways. 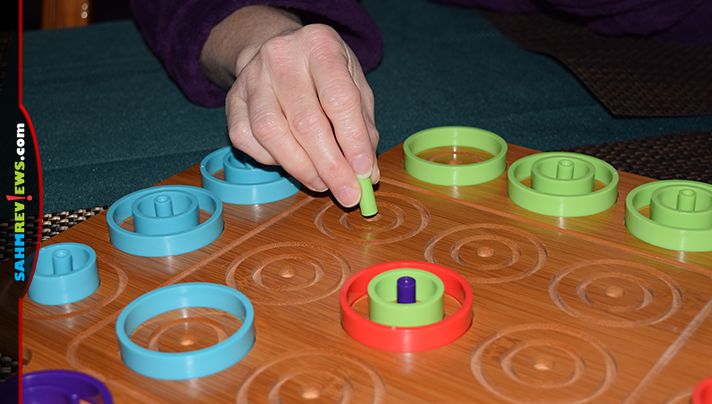 The game is played by each person taking a turn and placing one of their rings onto the board. Once it is placed it may never be removed or moved. There are three sizes of rings which nest into each other. You are still trying to line up three in a row, but Otrio gives you a few extra options. 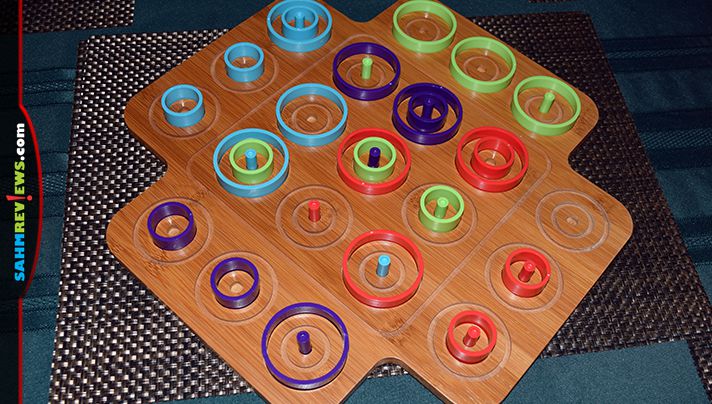 Of course you can line up three same-sized pieces of your color. You can also line up three pieces in ascending or descending size (small, medium, large). Getting three of your pieces into one space also is a win! And because Otrio supports up to four players, you have to consistently watch your opponents’ colors as well as your own so you can block them! 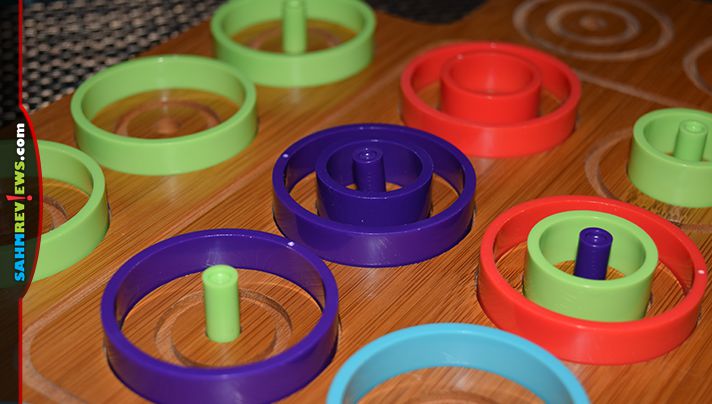 Also a high-quality wooden game, Otrio is available on Amazon or on Spin Master’s website.

These are just two of the many titles picked up by Spin Master during their acquisition of Marbles – Brain Workshop and we expect more in the future. If you’re interesting in learning more about their entire product line, be sure to follow them on Facebook and Twitter to be in the know.

Had you ever visited a Marbles – The Brain Store location before they closed?