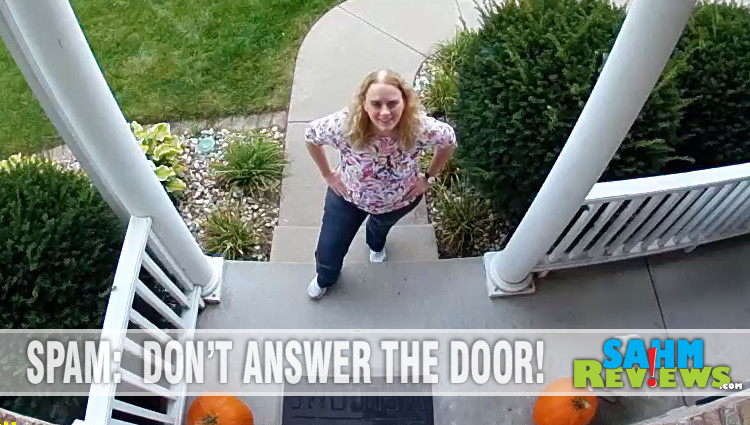 Home Security Without a Contract

A couple weeks ago we had new neighbors move in around the corner and as is our custom, we welcomed them to the neighborhood with a plateful of treats. They returned the plate a week later with a lovely chrysanthemum plant. That’s what it’s like around here. You leave your doors open until you’re ready to go to bed. If you accidentally leave your garage door open in the middle of the night, either a neighbor lets you know or you wake up in the morning and nothing appears to be missing. I’ve always felt safe and secure and never felt the need to look over my shoulder when outside at night.

Until recently, that is. Sometimes the girls need to arrive at school early so it was business as usual until I opened the door to the van and saw things everywhere. Everything from the glove compartment was on the passenger’s seat and the floor. The things from the center console were on the driver’s seat and the floor. I was unnerved by it all. I hadn’t surveyed the scene yet to figure out which window was broken, but as it turns out, none were. Scott thought I had locked it since I was the last one inside. I thought he had locked it since he drove and my hands were full carrying stuff in from the trunk. They had gotten into our vehicle on the one instance where we didn’t lock it. The bright side is that they didn’t do any physical damage to the vehicle nor did we find anything of value taken. As I started talking to the neighbors about it in the days to follow, I discovered that this wasn’t an isolated incident. A couple other neighbors had experienced similar situations. One had been hit multiple times, another had a vehicle stolen. 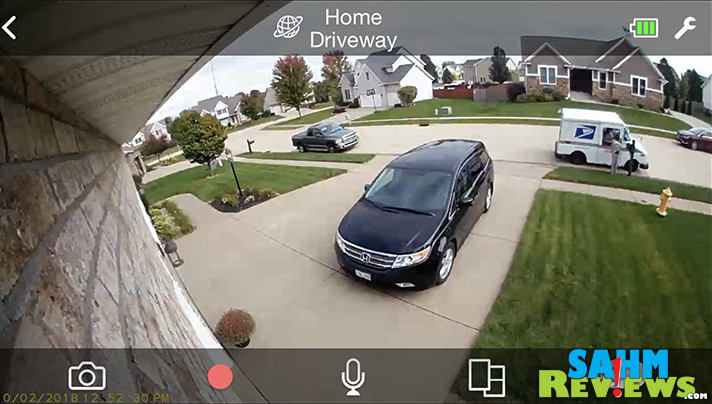 It made me wonder if perhaps these criminals were checking for unlocked doors every night. Scott and I did the next logical thing: start researching the next piece of hardware for our smart home. He discovered a few he is interested in learning more about, while I took the advice of a friend and checked out the HomeHawk by Panasonic. The HomeHawk cameras have built-in motion detector features and can monitor and record the sights and sounds of the area where the cameras are located. Without needing a contract AND from my phone. Count. Me. In. 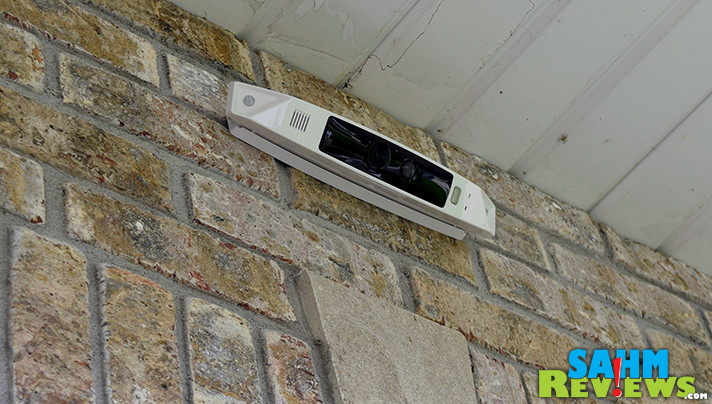 How many cameras come with the HomeHawk?

With single above-door units or packages that include one or two additional cameras, there are a number of options. With the KX-HN7002W packages, the front door camera offers a HD wide angle lens in addition to one water-resistant peripheral camera with the KX-HN7002. We mounted the peripheral camera on the opposite side of the garage to ensure we have full view of our entire front yard when combined with the coverage from the front door cam. The nice part is that the system can accommodate up to 8 mobile devices and 16 cameras (yes, 16!!) so we have the option of adding more cameras around the home to ensure we have adequate coverage from multiple angles. I seriously want to buy an extra one so I can see how many raccoons have been raiding my backyard each night!

Is the HomeHawk setup easy?

When it arrived, I tasked Scott with installing it. To be fair, it was because I was out of town at a conference. The following day, he sent me a message and said the setup of the HomeHawk was easy. My first thought was, “Of course it was, all tech stuff is easy for you.” So I asked him outright if it was Scott-easy or if it was non-techy-person-easy. He confirmed it was simple enough that someone with limited technological expertise could set it up. The front door camera connects to screws attached to the wall, kind of like hanging a picture frame. The peripheral camera is a little more unique. You attach a base to the wall. The base includes a strong earth magnet which makes it easy to attach and adjust the angle of the camera. The installation into the brick took a little more work than the setup of the system and the devices, but once we had the right tools in hand (a hammerdrill with the right drill bits), Scott had it done in about half an hour. 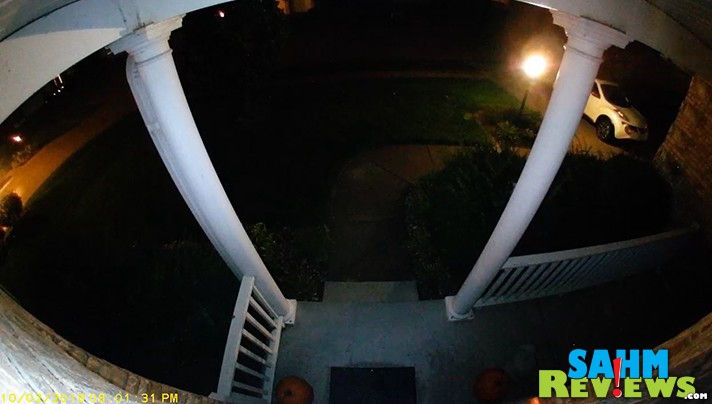 What are the HomeHawk features?

HomeHawk security cameras have motion detection features and can monitor and record both visuals AND sounds in the area around the camera. The wide-angle lenses show everything in color, even with night-vision! It offers a built-in rechargeable battery which makes it 100% wire-free. My favorite part, however, is that it sends an alert to your devices. Not just one device, but multiple. As long as you register a device, you can get notifications. I cannot stress how cool that is. Whether you’re at home in bed, running errands or out of town, you can check on what is happening outside of your home. Using the HomeHawk app, you can review what has been recorded or you can watch live what the camera is seeing. Since my concern stemmed from something that happened in the middle of the night, it’s good to know that the HomeHawk switches to night vision mode when there isn’t adequate lighting. The built-in speaker allows you to talk to someone where the camera is installed, too. If the doorbell rings and you aren’t home, you can pretend you’re home but can’t get to the door. Better yet, if Fedex arrives and needs a signature but you’re in the middle of washing dishes or changing the baby, you can tell them you’re home but need a minute to get to the door. 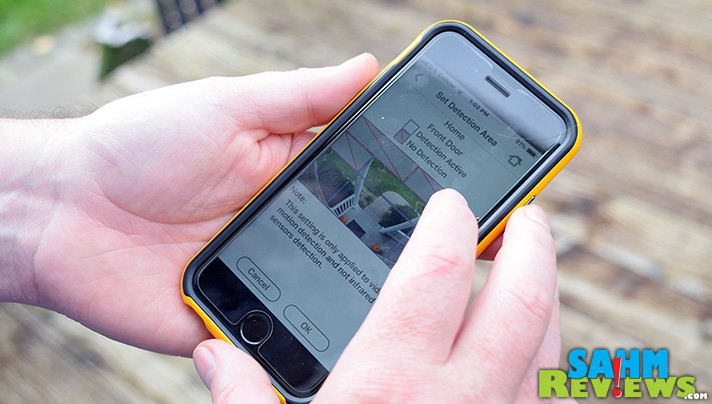 Which devices sync with the HomeHawk?

I keep saying that you can check your Homehawk from your devices, but I haven’t shared which ones. In addition to using the app on iPhone and Android devices, you can also use Amazon Alexa Show or a TV connected to Chromecast using Google Home. 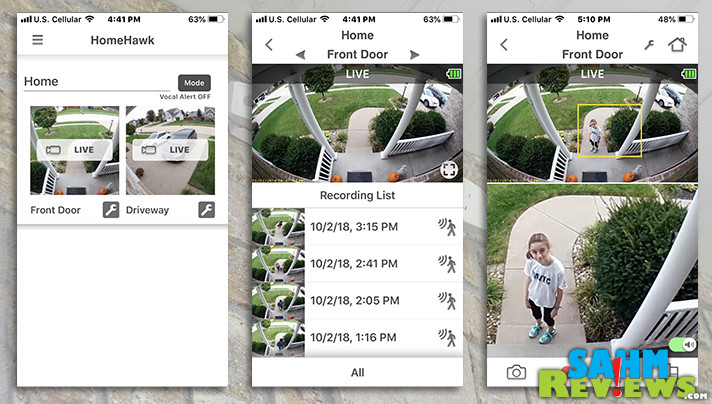 What can the HomeHawk app do?

As I mentioned before, there’s a speaker that allows you to talk to whomever is at your door. That’s done through the HomeHawk app. It also has a variety of features that I didn’t know it had. Yes, I knew about video and audio recording as well as live streaming, but I didn’t realize you could set the areas of detection. So you can have it pointed at the driveway and street but not have it trigger when a car drives by. The app is very powerful with the ability to move the view and zoom. 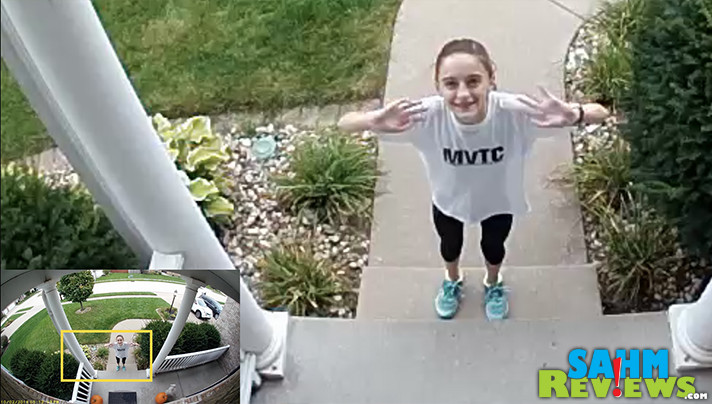 There is something to be said for peace of mind and the HomeHawk by Panasonic can give that to you. It might not be a piece of home automation equipment you have considered in the past because, honestly, why would you unless you had something to worry about? I know we didn’t… until the incident with our car.

Depending on how much of your yard and drive you can see from your front door, the single camera Panasonic HomeHawk may be all you need. If you’re looking for a fuller experience, check Amazon for one of the packages that includes a base unit as well as additional cameras. Regardless what you decide, you’ll need to make sure you purchase anchors if you need to attach it to brick or a micro SD card if you want it to store recordings as neither of these items comes standard with the purchase. Check out the Panasonic HomeHawk website for specific product details and visit them on Instagram, Twitter and Facebook to get a glimpse of what else is happening. In the meantime, enter to win a HomeHawk by Panasonic right here! Remember that visiting every day and entering increases your chances of winning.

73 comments on «Home Security Without a Contract»