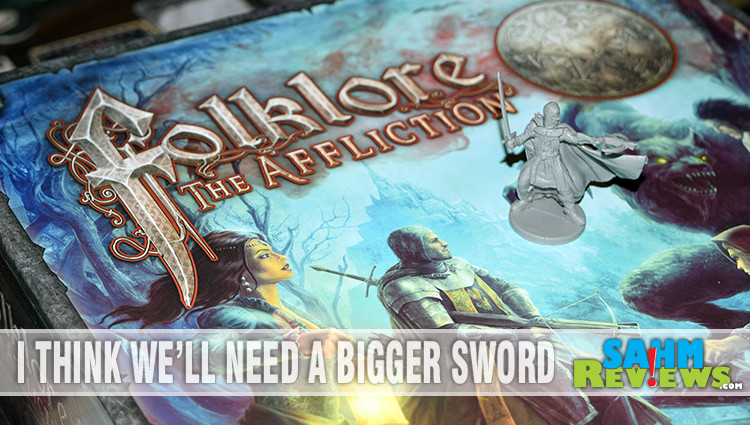 At some point during my early high school years my parents bought me a Dungeons & Dragons Starter Set and an extra module or two as a Christmas gift. I thought it was an odd gift idea because I had never expressed any interest in role-playing games and to be honest, had never even heard of D&D. This would have been somewhere around 1982 and the game that would put TSR on the map had only been out a couple years. To this day I don’t know where they got the idea.

We lived in a small neighborhood just outside the town’s limits. The total population of our hometown was only 5,500 and you could count on one hand the number of kids my age on our street. On more than one occasion me, my brother and another neighbor boy sat down to try to play. Problem was that none of us had any idea of what we were doing. We knew from the rulebook that one would have to act as the dungeon master, controlling the story and the direction of the game. But we didn’t possess the creative skills necessary to bring the game to life. For those of you that have played Dungeons & Dragons before, you know that a good game hinges on the ability of the DM. In our case, we sucked, and never made it past a couple turns before stuffing the papers back into the box.

In the following 35+ years the game of D&D has advanced and morphed into version 5e, with a new version set to be released later this year. My girls got their first taste of an RPG a couple years ago at a local convention when a friend was running a custom dog-themed game called Pugmire. They took on the role of different breeds of dogs fighting off all types of wild animals. The same guy regularly runs kid-friendly Pathfinder RPG campaigns at our weekly game night, which has spawned a dice collector in our youngest daughter.

So that’s my dilemma. Both daughters love acting out their characters during the game, and of course collecting treasures and upgrading their characters. So much so that they want to play at home. But I still suffer from the inability to creatively express myself and do justice to the worlds they want to explore. So began the search for an RPG game that didn’t require someone to act as a Dungeon Master – one that everyone could play!

And we found it at last year’s Gen Con convention in Indianapolis. Folklore: The Affliction was positioned in a prominent spot in Greenbrier Games‘ booth towards the back of the exhibition hall. You couldn’t miss it as you walked by. Not only did the artwork pull us closer, the amazing plastic miniatures that were included were among the best we had ever seen. We needed to find out more. 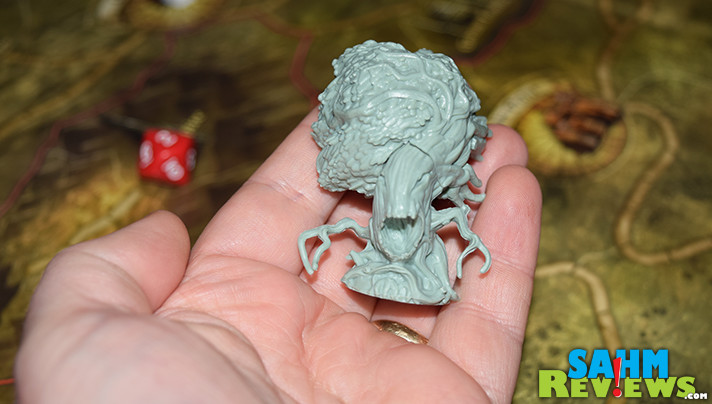 We quickly discovered it was exactly the type of game we were looking for. A story-driven experience that didn’t require one person to act as an overseer. In fact, the role of storytelling rotated between players as smoothly as turns did. Everyone becomes a character, monster or game master at some point by performing multiple roles! 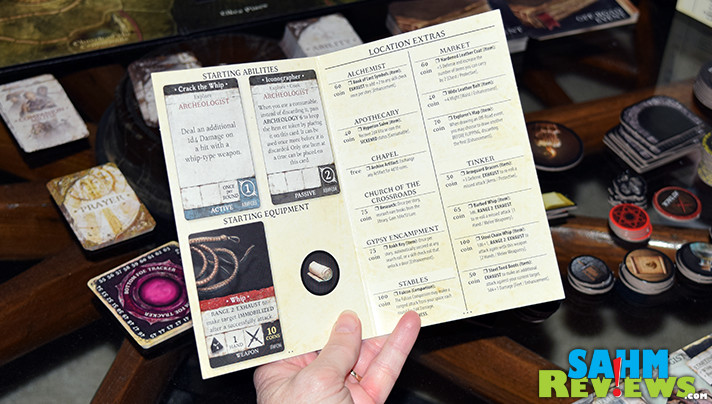 Here’s my dilemma: normally at this point I’d want to tell you all about the game, how it’s played, what you’ll experience and details about the lore or background story. This is one of those cases where we can’t – it would completely ruin your own experience! Folklore: The Affliction is meant to be experienced start-to-finish as an ongoing story where the decisions you make impact your successes in the game. So we’ll expend with the regular routine and highlight a little bit about what you can expect to receive and encounter during your plays of Folklore: The Affliction. 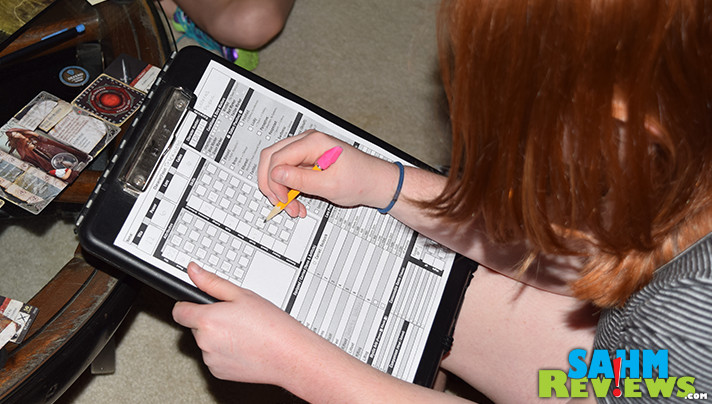 Much like Dungeons & Dragons, each player will generate their own custom character with unique skills and attributes. While the game does include player sheets that can be photocopied, we elected to download the custom-made sheets on BoardGameGeek since their larger format on a single side was much easier on my aging eyes. 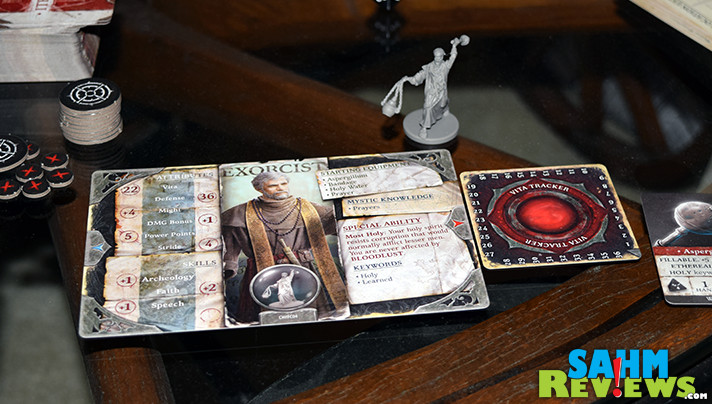 Also taking a cue from successful RPGs you will acquire new equipment, consumables and treasure along the way and may even recruit a companion or two! Character keywords will unlock special conditions if they appear on a card and your overall status (Cursed, Immobilized, Sickened, etc.) will impact your ability to proceed. 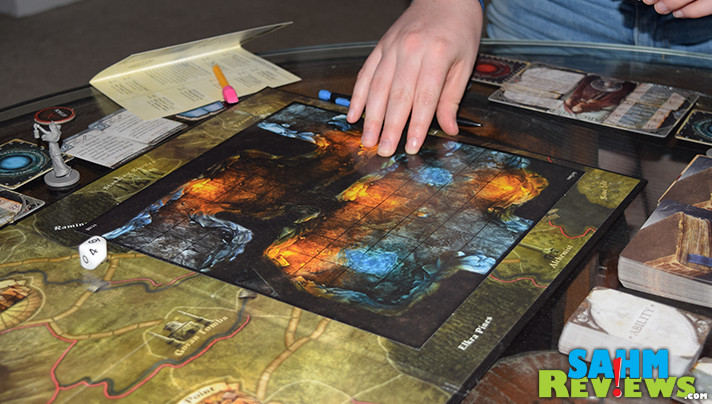 One of the things we found unique is that Folklore: The Affliction utilizes two separate game boards. One is an overall board that covers the entire region of exploration. The other is a close-up map that represents whatever city/etc. you enter. Think of it as a macro and micro map, which really helps you envision the world in totality. And not just one – there are over a dozen different area types to explore! 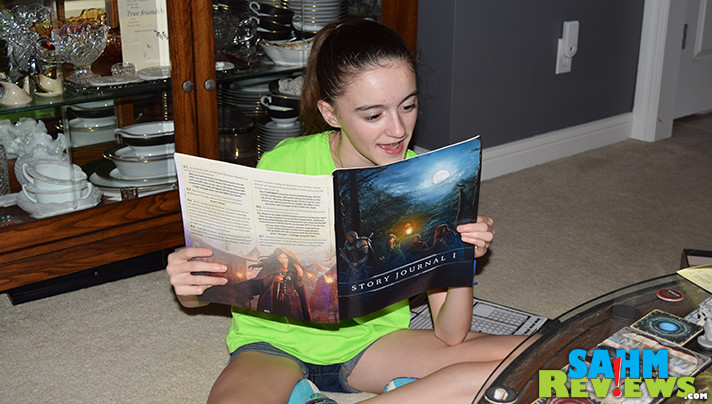 The real shining star of the game is the story. This is meant to be a full role-playing game, and doesn’t disappoint in that department. All players will spend most of their time reading or listening to the story, being presented with various options and then discussing what path the group should take. The active player has control of the final decision, but since that power changes as turns do, you don’t have to worry about one person taking over the game and ruining the experience for everyone. 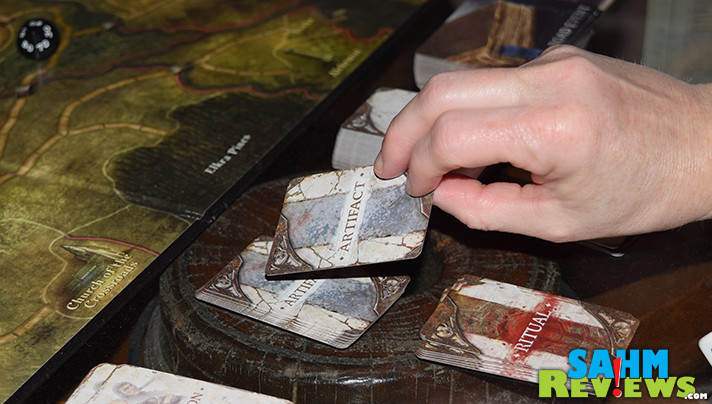 I realize I haven’t presented a ton of information about the game play. You’ll have to trust me when I say you have to experience it for yourself. You should get some idea from our photos and hopefully no real spoilers. It is by far the best game of this type we have ever seen and is as close to a Pathfinder/D&D session that one can get without enlisting the services of an independent dungeon master. 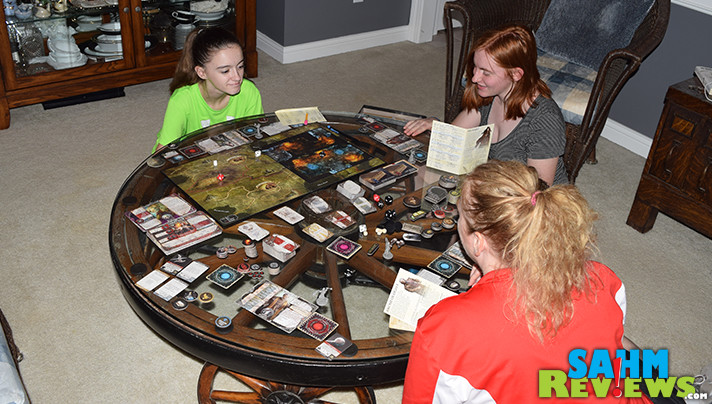 But don’t just take my word for it! The first Kickstarter campaign of Folklore: The Affliction was so well-received that they nearly ran out of stock and needed to offer a second campaign! The second edition sought to bring pricing down a little bit by replacing the plastic miniatures with cardboard standees (you could still buy the minis via an add-on option), but the overall rules and game play remain the same. This second edition has not hit retail yet, but you can find affordable copies of the first edition (with miniatures!) both on Amazon and direct from Greenbrier Games on their website.

As you can see, things are moving fast over at Greenbrier Games. Make sure you are following them on Facebook and Twitter to find out exactly when the second edition of Folklore: The Affliction will be available and to find out what is coming soon in the Folklore world!

Have you ever played any type of role-playing game?