Last year at this time, we headed to the University of Iowa Children’s Hospital with a van full of goodies. Through the year, we had been collecting and setting aside SWAG and other items that our kids were too old for or that perhaps we already owned. When it came time to prepare our holiday content calendars, we reached out to our myriad of clients and asked if they would be willing to support our charity drive. They did and the result filled the van plus allowed us to deliver to some local charities. The hospital was incredibly excited for the large donation and the variety we offered and we drove away feeling like we had done something to put a little spark of happiness in several young lives.

This year, we once again decided to set aside toys that made their way to us. Sometimes we would receive a package as a prize or for participating in a Twitter party. Some items I received as gifts for attending a media event. There were a couple projects that involved unboxing and mentioning toys cobranded for a movie on our social channels. What we didn’t need to open or use, we decided to once again earmark for the our holiday charity drive. But we did something a little different when it came time to prepare for our holiday content. As with last year, we reached out to our clients for their support, but included more details on our primary charity: the University of Iowa Children’s Hospital.

You may recall us sharing about the Hawkeye Wave (AKA the Kinnick Wave), a new tradition at University of Iowa home football games that was so awesome it went viral. Our outreach requests hit home with many people who had watched or read about this amazing tradition. Actually, just last night during the College Football Awards on ESPN, University of Iowa was awarded the 2017 Disney Sports Spirit Award which is presented to the sport’s most inspirational figure. During our trip to the hospital this year, we had a chance to stand in the Press Box, the room where the children are able to watch the game and discovered what an amazing view it is. They can literally see the faces of the people waving back at them… it’s THAT close. I can only imagine how many smiles it generates on both sides of the glass.

I was amazed by the generosity with companies sending us cases of products to deliver to the children’s hospital. We set aside some items for the local churches including items such as riding toys the hospital didn’t allow. But everything else we carefully packed into boxes and realized that one van wasn’t going to do it. We debated renting a moving van but my folks said they would help with the delivery. We had to play a serious game of Jenga to get everything into both vehicles but we did it! 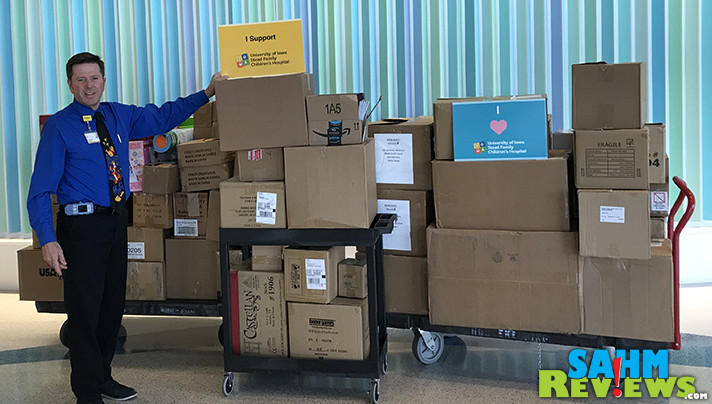 We arrived in Iowa City and were greeted by Dan Mears, Concierge at Stead Family Children’s Hospital. Two large carts and one small cart later and we had it all unloaded and ready for their new home. These donations will be earmarked for many different departments. Some will be cataloged and delivered to public areas to be used for checkout or game nights. Others will be shared with various departments such as intake and radiology. Some will be given to patients. All will make people happy.

Dan took us on a tour of the hospital and I was amazed as he shared all the details. It’s designed using concepts like at a Disney theme park with a backstage and a main stage. Every patient room is on the outside of the building and all the offices, labs and everything are in the center. 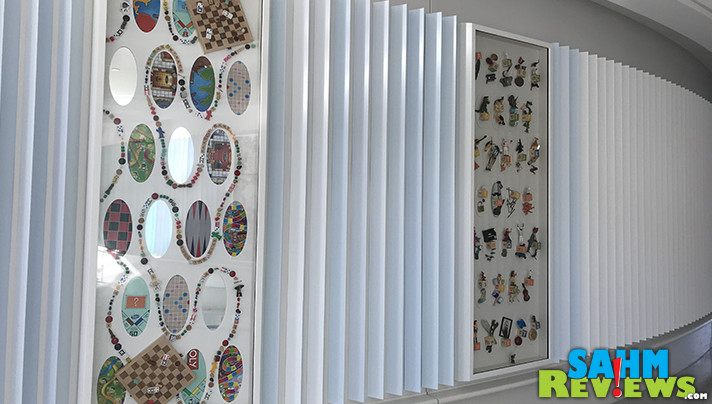 There are subtle nuances around the building such as the changes in wall color, interactive art displays and elevator lights that change color based on what floor you are on. The walls in the center of the building represent the seasons, starting bright, fading before turning bright again. The colors get lighter as you move away from the elevators. So even though family members are given floor plan and facility details when they arrive, they are often so overwhelmed they don’t remember. A trip to the cafeteria or somewhere might leave them disoriented and unsure how to get back. A simple look at the wall will remind them what direction to walk to locate the elevators. The building includes a cafeteria as well as a coffee shop, a movie “theater” with interactive capabilities along with a library where they do reading hour, crafts and other activities. The patient rooms are equipped with interactive monitors that display employee credentials on the screen when someone walks in the patient’s room. These temporary homes also include a separate space for the parents to sleep, a refrigerator, a customizable menu and many more features. 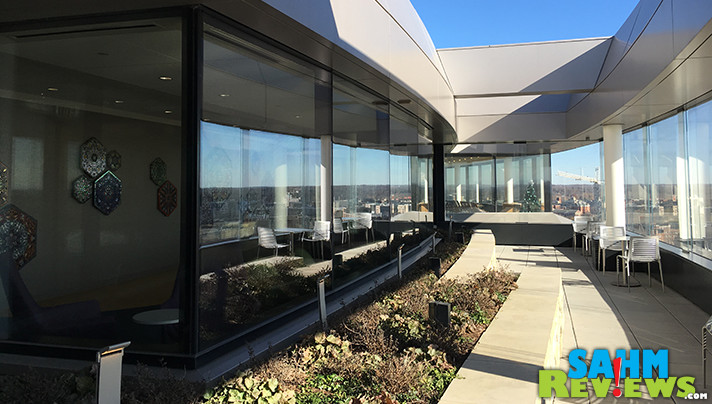 The top floor, open to the public except on game days includes an outdoor healing garden, conference rooms, and a meditation room among other features. I inquired as to whether there was a chapel on site and Dan said the meditation room was designed to be multi-denominational. Services are held regularly and is accommodating to all. As an example, there is a sign with the direction toward Mecca, shoe cubicles under benches and mats for use during prayer.

But the showcase is the Press Box where the kids get to participate in that incredible new tradition. The layout included all kinds of windows and a giant screen that aired events, including away games. This room offers a beautiful view but is restricted to events, gatherings, birthday parties, etc. for people associated with pediatrics. 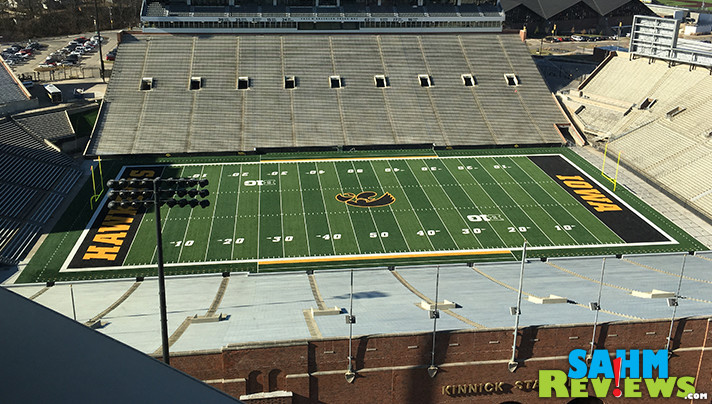 We were there for the inaugural wave and it felt like the kids were so far away. However, they aren’t. As we stood in the Press Box and looked down, the view was amazing and those kids could certainly see the faces of the people waving.

All this was for kids and their families who have to temporarily call the hospital their home. What it made me realize is that the work we did to coordinate this charity drive was well worth it and chances are… we will be doing it again next year.

Because you can’t buy the kind of joy that you receive from delivering a five figure donation of future smiles.

Have you ever visited a children’s hospital before?

19 thoughts on “Delivering More Than $15k Worth of Future Smiles”