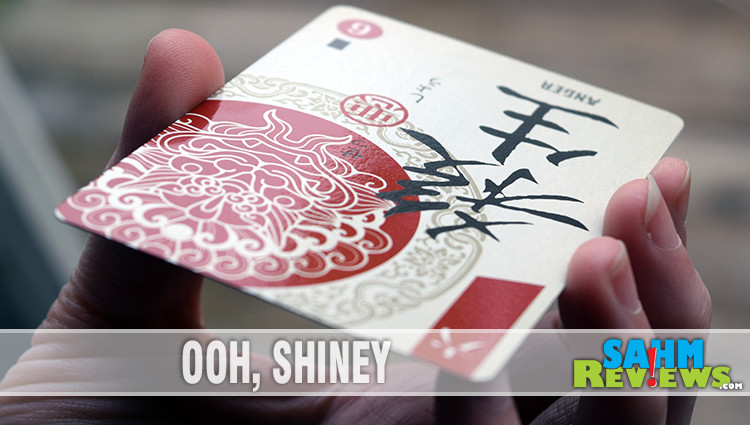 One of the best things about attending the annual Gen Con convention in Indianapolis is all the brand new games you get to see. Some have just hit the market, others are just previews of upcoming Kickstarter campaigns. Either way, you’re among the first hardcore fans to be able to try out the latest, greatest game.

And while new games are the primary draw of the exhibitor hall, I have found that some of the real treasures lie in wait for the person who is willing to look. We mentioned the dice deals our daughter seeks out every year. This is different. We look for those games that are in the displays but maybe not getting the attention of the booth’s demonstrators.

Among the gems we found this year was an inexpensive card game being offered by Greenbrier Games. It sat lonely at the back of their booth while their latest miniature-based games got all the attention. I can’t blame them, getting dozens of finely-sculpted game pieces for under $100 is hard to pass up on. But something about Overseers just called me to it. Check out the photos, you’ll understand why. 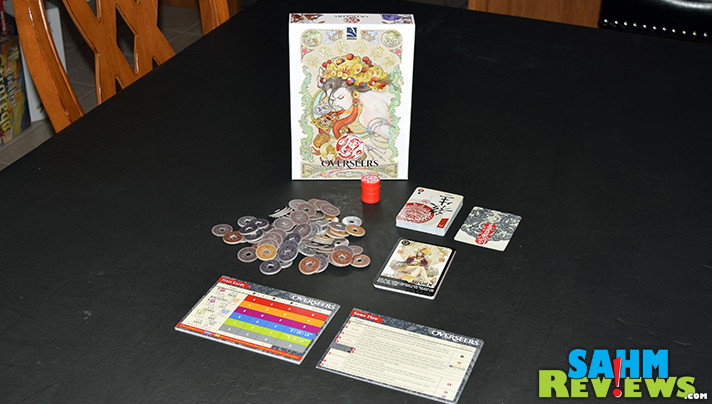 Overseers is really a simple drafting card game for up to six players and lasting under 30 minutes. It was the beautiful Asian-themed artwork that caught my eye. The basis of the game was explained as representing the tug-of-war that exists in the universe that coexists in eternal balance. Each player takes on the role of one of the Overseers sent to protect our world. Each have different powers that will bend the rules of the game and create a symmetry between the virtues and vices of the human world.

So maybe that’s overreaching a bit – it is just a card game after all. How can the results of a random deal have an effect on world-changing powers? I don’t have an answer to that question, but did note that the entire contents of Overseers is flush with thematic symbolism.

Included in the box are a deck of 36 cards, 11 character cards, voting tokens and a number of scoring tokens. The deck is comprised of six suits, represented by Anger, Benevolence, Lust, Courage, Hope and Greed. As you can see, four of the six suits are what we would call “vices”, while Courage and Hope are the lone two representing virtues.

Players are dealt a hand of six cards, picking one and passing the rest to their left. Then another is picked and again passed until a full hand of five cards is completed. The extra cards are discarded into their own pile. A “Leader” is chosen at random and given the special leader card – this person gets to resolve all ties. 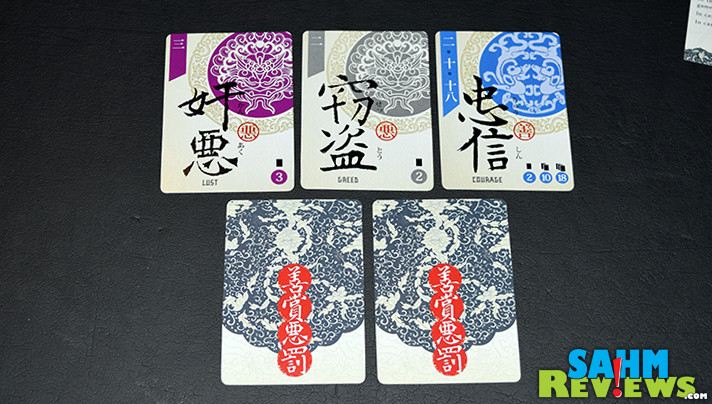 All five cards are laid down in front of the players in a reverse-pyramid form (three on the top, two on the bottom). The top three cards are revealed and everyone may discuss what they think about the cards displayed. You are trying to determine which person has the highest scoring hand based upon this limited information. 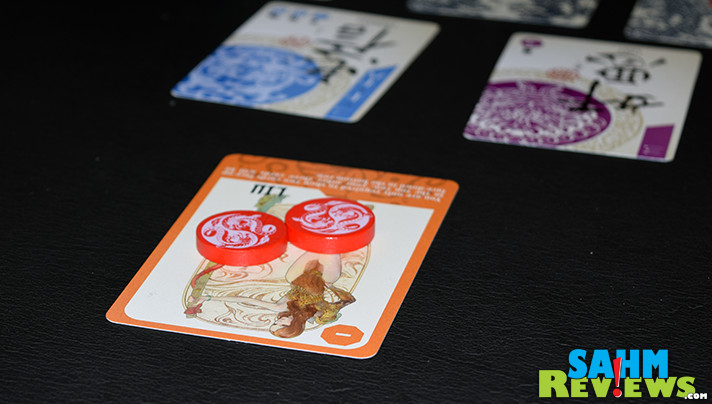 The four vices are worth a set number of points each, listed on the face of the card. The virtues scale up in value depending on the number of each kept during a round. At this point players vote on who they think has the highest scoring hand and the player who receives the most votes has a decision to make. Either agree with the majority and discard two cards of their choice or disagree and simply move on to the next part of the round. 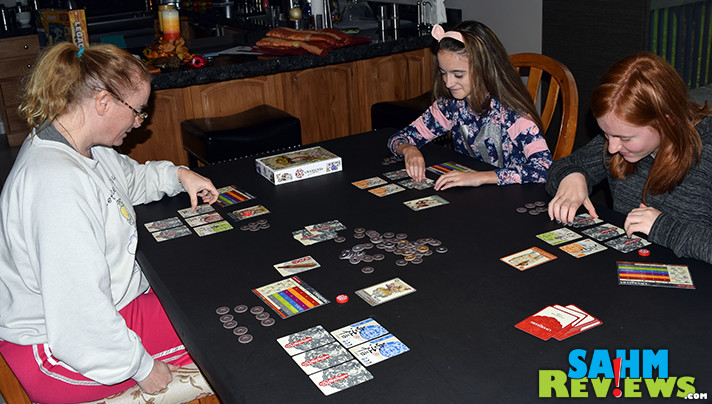 Everyone reveals their cards and if the person who was voted on does in fact have the highest scoring hand, and they disagreed, they then lose their two highest-scoring cards. If they disagreed and didn’t have the highest hand, they get to take a card of their choice from the discard pile! As you might have guessed, your strategy will be to hide your best cards and bluff your way through the round so you don’t get voted on!

As I mentioned, each player represents one of the eleven Overseers sent to protect this world. Each character card awards a different ability to every player and is resolved at a certain point in the round as noted on the card. For instance, one might force all players to draft two cards from their current hand instead of one. Another lets you peek at an opponents two face-down cards. And a third awards additional points for any Anger cards you possess. With eleven different Overseers, every game is certain to be different. 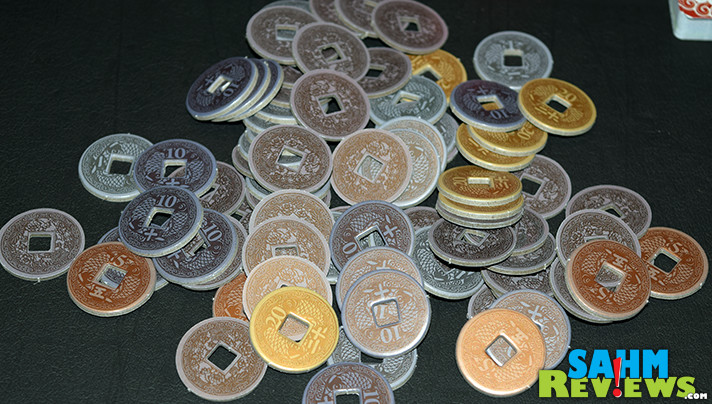 Scoring tokens are received equal to the number of points listed on your kept cards and laid face-down so no one knows your overall score. Three identical rounds are played with the person scoring the lowest being awarded the Leader card for the subsequent round. The player with the highest grand total wins Overseers! 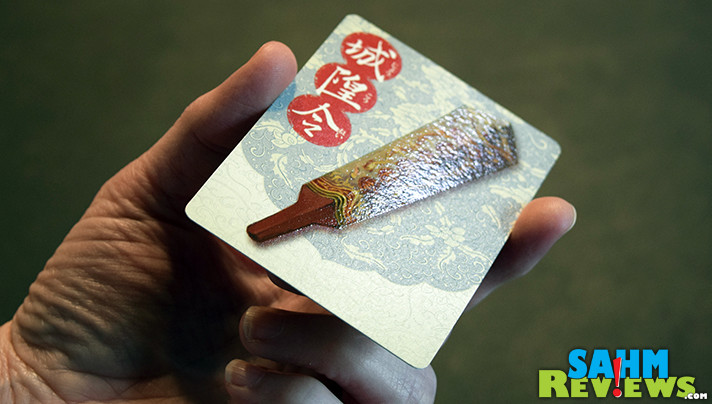 Thanks to a successful Kickstarter campaign, Overseers is a much higher quality product than most card games in this price range. Both the box and cards have spot UV printing, which at first may not sound like a big deal, but seeing the results in person will make you a believer. It adds such elegance to the cards that even if you find yourself playing the game a lot, you won’t want to sleeve the cards because you’d lessen the effect of the glossy printing.

At well under $25, Overseers is quite a good value considering the quality and the fact it supports up to six players. Find your copy on Amazon or direct from Greenbrier Games on their website. Remember those miniature games I mentioned that were getting all the attention at Gen Con? We’ll be bringing you information about those in the near future – in the meantime watch Greenbrier’s social timelines (Facebook, Twitter) as we hear rumors of another exciting Kickstarter in the works!

If you were an Overseer, what special power would you want?