I have finally succumbed to the realization that I am no longer in touch with pop culture like I used to be. I still keep up on all things Marvel and wouldn’t miss a new episode of The Simpsons or our latest favorite, Orville. One area I’m oblivious to is anime. I overhear my daughters talking about Pokemon and RWBY quite often, but honestly do not know much about those worlds. There seem to be too many to keep up on and only so many hours in the day.

There’s another anime property that is all the rage and I haven’t seen a single episode – Attack on Titan. And yet when I started reading the rulebook on a brand new game by Cryptozoic Entertainment set in the same world, both daughters came running over wanting to find out as much as they could about the game as they were very familiar with the series. Turns out it is more popular than I could have imagined with over 68 million copies of the manga in print and an anime series which began in 2013 and has already spawned a number of spinoffs. 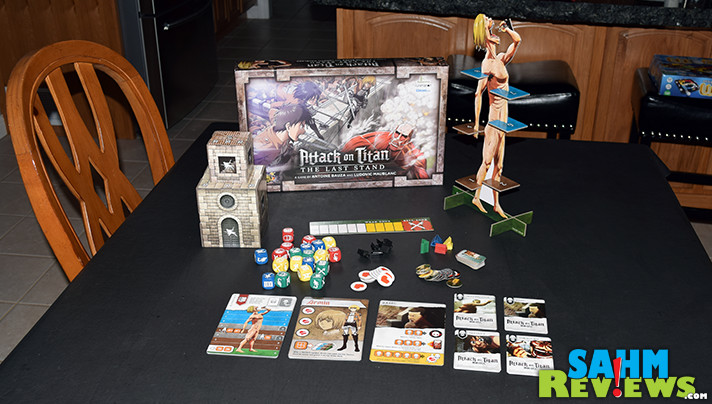 Attack on Titan: The Last Stand is the latest licensed board game from the same people that brought us Ghostbusters and Crossover Crisis, a card game based on almost every cartoon to appear on the Cartoon Network. Attack on Titan is unique in that it is a semi-cooperative game pitting one player against all the rest. Not to worry, that one player gets to play as one of the giant Titans and as such has much more power than the other players.

The Titan is threatening the last human city and the team of players have banded together to protect the weak (and the supply depot) to try to save humanity. The first thing you’ll notice about the setup of Attack on Titan: The Last Stand is the huge 3-D board. Not only does the game include a multi-level tower, it is dwarfed by the enormous 15″ tall Titan! 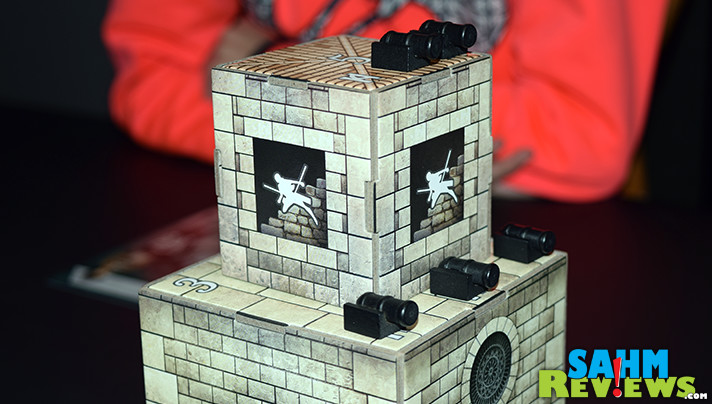 The humans possess cannons, which are placed on the tower. Each level of the tower (and levels on the Titan himself) has a designated number. You will move between levels in numerical order, with a few exceptions which we’ll explain in a bit. Heroes are placed on starting levels zero (on the Titan) or 3 or 5 (on the tower). One of four different Titan cards are chosen for the game. This will determine the Titan’s unique abilities and the Titan player will use the seven action cards matching their Titan. 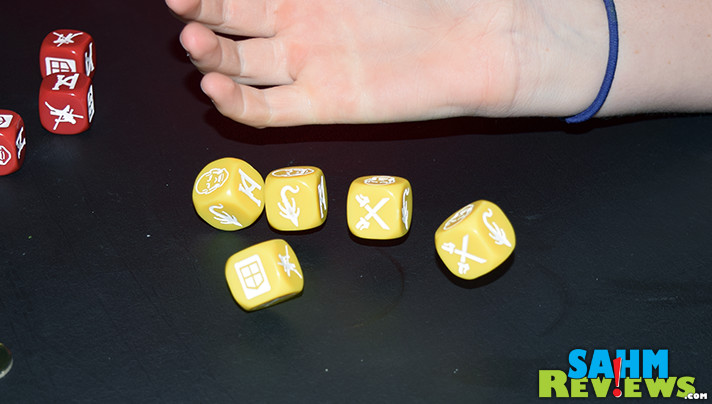 The game is played over rounds, and each round is resolved in a particular order. First, the Titan player selects two action cards from their hand, placing one face up and the other face down on the table in front of them. Then the hero players roll their five hero dice. Any dice rolls that result in a skull symbol are given to the Titan. Heroes may reroll any of their dice as many times as they wish, but any time a skull is rolled, that die is given to the Titan.

The Titan may now spend any skull dice given to them to activate abilities on their Titan card. Abilities may be performed more than one time as long as there are enough skull to pay for the multiple instances. Once all skulls are spent, the dice are returned to their owners. The owners then may re-roll the skulls to try and get other results. Additional skulls rolled are set aside and not given to the Titan. 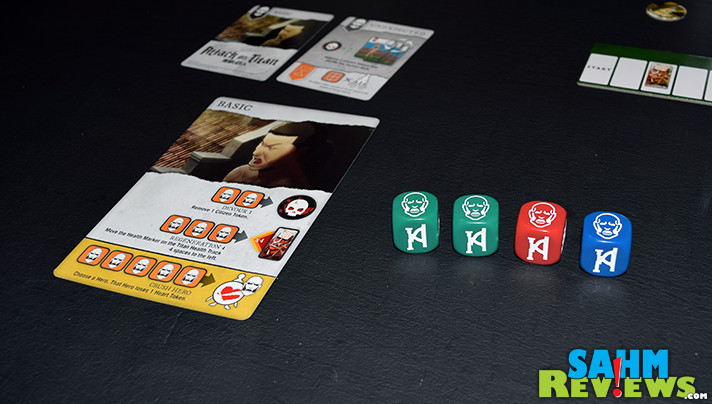 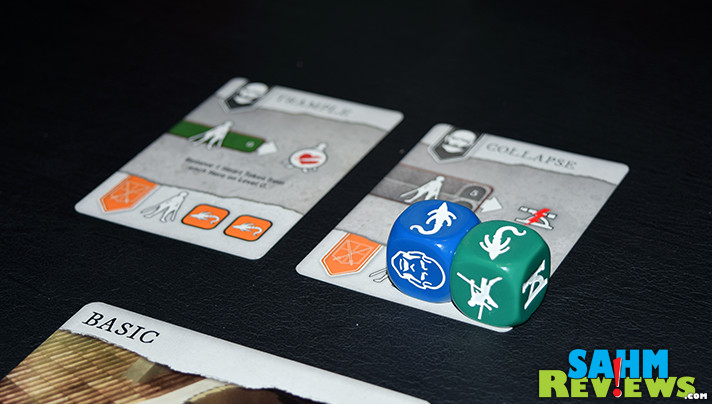 Now the heroes are free to spend their remaining dice to move, cause damage to the Titan, reveal a new tactics card or activate the current tactics card, in any order. Spending a die with the move symbol allows the hero to move up or down between floors in order. They may also move between the ground (level 0) and the first floor of the tower (level 3) by spending only one move. They may also move between the two levels of the tower (3 and 5) by also forfeiting only one move die. 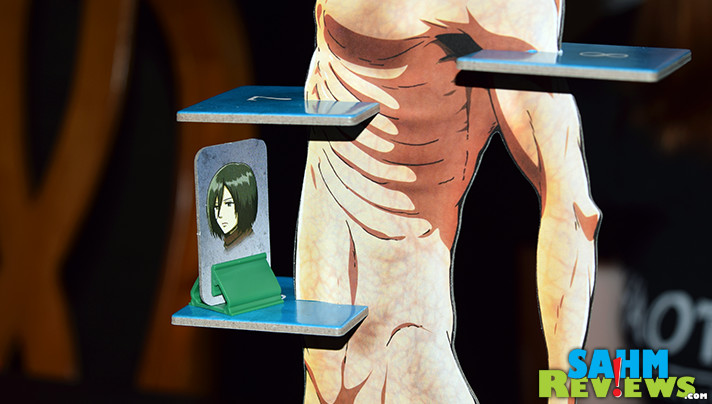 A shield symbol allows you to change the current tactics card and may be used to counter some of the Titan’s actions. At the end of the round each player recovers all of their dice and prepares for another round just like the previous. The Titan sets aside the two cards they just used and will be selecting from their remaining hand. Cards remain set aside for one round and are returned to the hand at the end of the following round. 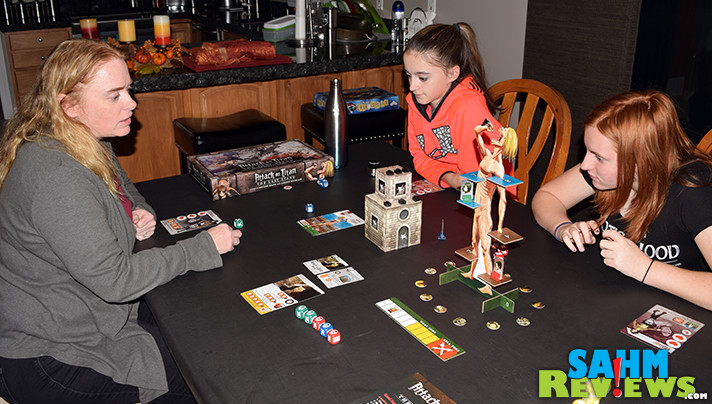 The Titan can win the game by either eating all twelve citizen tokens, destroying all six cannons or consuming just one hero (one of the players). The heroes have only one way to win – by killing the Titan! Each side has different abilities that, if strategically implemented, should assure them a swift victory in this one-vs-many battle.

Also check out Cryptozoic Entertainment’s current game offerings, including another set in the Attack on Titan world. Then watch their Facebook and Twitter timelines to see if they will be offering more from this genre or will be focusing on another anime series (that we probably haven’t heard of either!).

Were you familiar with the Attack on Titan anime series?

8 thoughts on “Attack on Titan: The Last Stand Game Overview”