Home / Recreation / Games / An Old West Duel Without the Violence

An Old West Duel Without the Violence

It’s weird how some things just work themselves out. Or even a complete coincidence that takes decades to come to fruition. That’s exactly what happened to us recently when we discovered the award-winning game Flick ’em Up! by Z-Man Games. 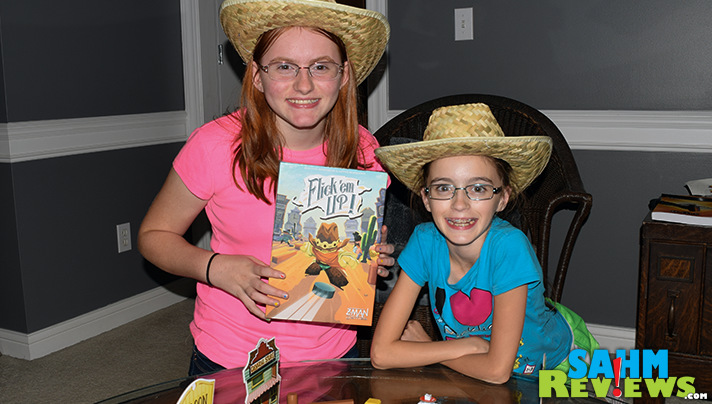 If you’re a regular reader, you’ve no doubt seen photos of our living room table which regularly doubles as a game (and puzzle) surface. Almost 40 years ago while living in West Germany, my parents cobbled this table together using four small wheels from a wooden wagon and a very large wagon wheel that had previously seen service as a chandelier at a local restaurant. Connected together with some plumbing pipe and adorned with a custom-ordered 1/2″ thick piece of round glass, it served them well for many years before being handed down to our family when we purchased our first home in 1997. 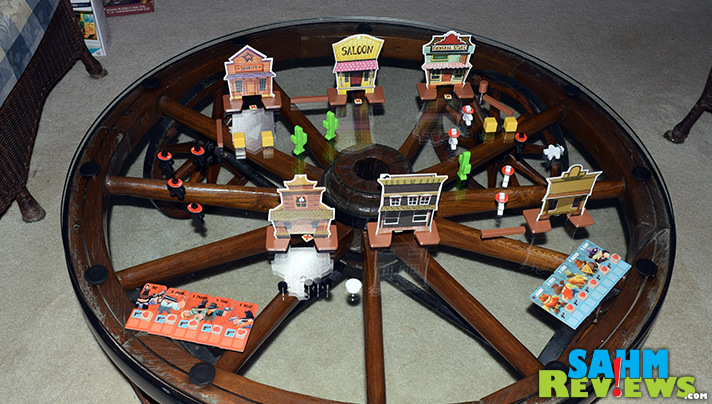 We’ve probably assembled dozens of large puzzles and played 100’s of games on this table over the years. Previously the table was just a place to lay our cards – until now. The western theme of Flick ’em Up! combined with the old west feel and slick surface of this glass table would suggest this game was specifically designed for us! Well, at least for this table! 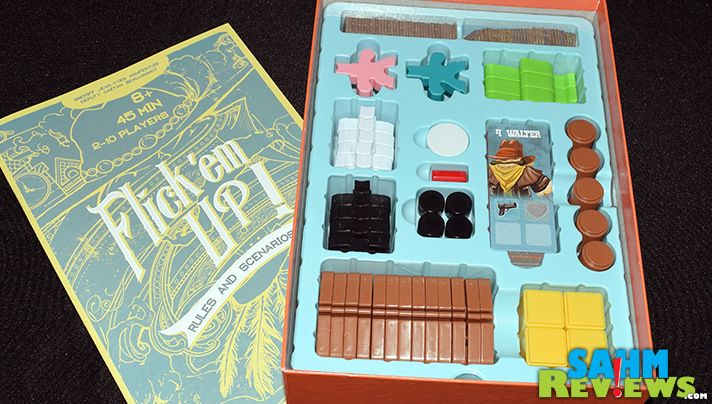 Flick ’em Up! was original created by the genius minds at Pretzel Games and later published by Z-Man Games to a broader market. Nominated for a number of industry awards, Flick ’em Up! was most certainly a type of game we did not have in our collection. But after playing it, we cannot wait for the announced expansion! 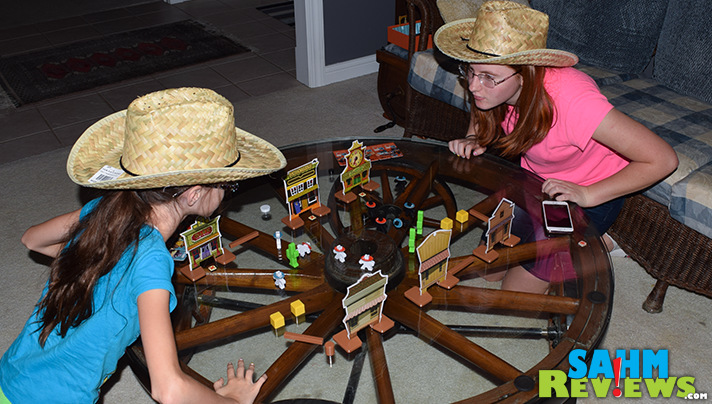 Typically referred to as a dexterity game, in Flick ’em Up! you are commanding a team of five lawmen or outlaws in one of a number of included scenarios. This story-telling aspect can be expanded by the players as they create their own custom scenarios or you might simply follow the order of campaigns included to challenge yourself with harder and harder tasks. 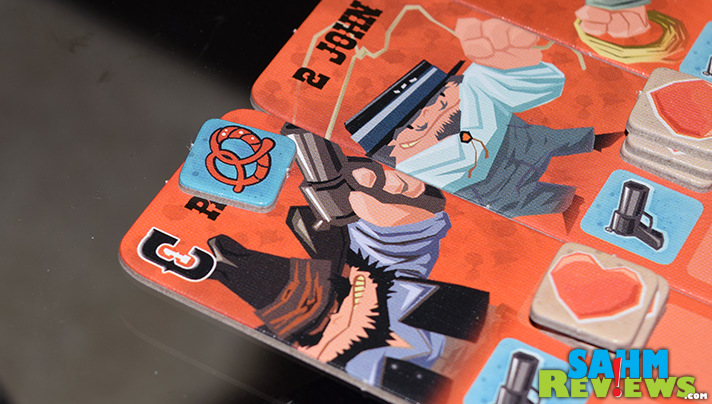 It’s actually rather simple to learn – you have to take two actions per round for every cowboy on your team (Flick ’em Up! can be played by up to 10 people in teams, each taking control of one pawn.) You have three options to choose from – move, shoot or take/leave/exchange – and may perform them in any order or multiple times. 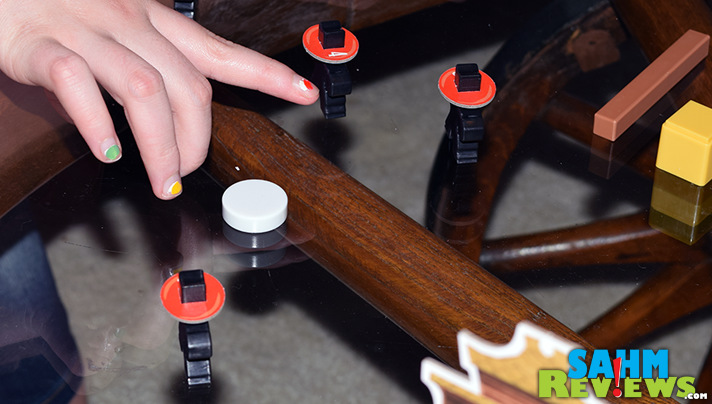 Here’s where the fun begins. To move, replace the active cowboy with the included white disc and “flick” it with your finger. If it hits ANYTHING, the move is invalid and you must move on to your second action. If it stops successfully without bumping any of the other players, the buildings or other terrain elements, place your cowboy on the spot where the disc stopped. 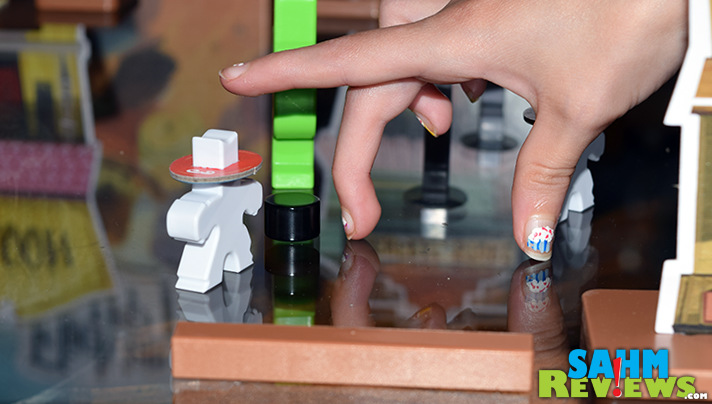 Shooting is similar – place a bullet to either side of your cowboy and “flick” it at an opponent’s cowboy. Knock him over without hitting anything else (ricochets don’t count) and that person loses one health. Each cowboy typically has three health (depending on the scenario rules) and once out of health is removed from the game. In the first scenario, the first person to take out three of their opponent’s five cowboys is declared the winner.

In later campaigns you will be able to visit the stores by shooting the disc into the narrow openings, allowing you to take the third action of picking up, dropping off or swapping inventory items. Additional guns, dynamite and sacks of gold are among the items you’ll be vying for. Turns are cleverly tracked by flipping the cowboys’ hats to the opposite side each time you activate them. A town hall with a clock keeps track of the rounds and the current active color!

The setup combinations of Flick ’em Up! are infinite and are only limited by your imagination. By using a flicking mechanic to move and shoot it becomes much more than a tactical game where position reigns supreme. You’ll also need to practice your flicking ability to keep on target. Playing on different surface types will also alter how far the discs travel, so mastering it on our glass table will be very different than our wooden one! 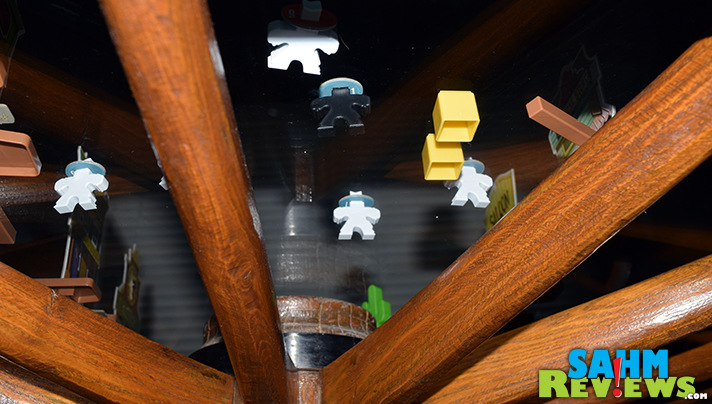 Flick ’em Up! is most likely sold out at your local game store, but you can still find copies on Amazon for around the $35 MSRP. I hinted about an upcoming expansion, so be sure to keep an eye on Z-Man Games’ Twitter and Facebook timelines for announcement regarding it and other new titles in the works!

Who would you play as? The lawmen or the bandits?

8 comments on «An Old West Duel Without the Violence»