By now you know that we absolutely love puzzles and games. Sometimes they can be an escape from the drama of everyday life, other times we play to challenge our aging brains. No matter the reason, we have always made time to play. And with two pre-teens in the house, this time together is even more precious to us. Pretty soon they’ll be trading their meeples for boys. We’ll keep trying to delay that as long as possible. 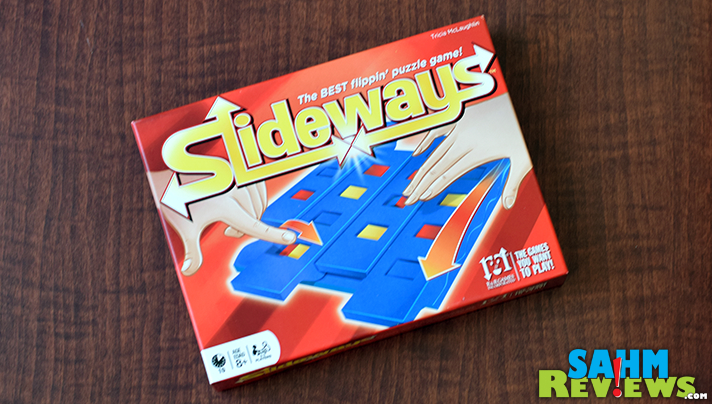 Our youngest daughter has shown a real talent for solving puzzles, so when she saw the box for Slideways, she immediately claimed it as hers. There was a little disappointment in her eyes when I explained that it wasn’t a puzzle, but a game. I went on to explain that it was something she could learn quickly and then challenge her sister to, and that soothed any misgivings and we went right to it. 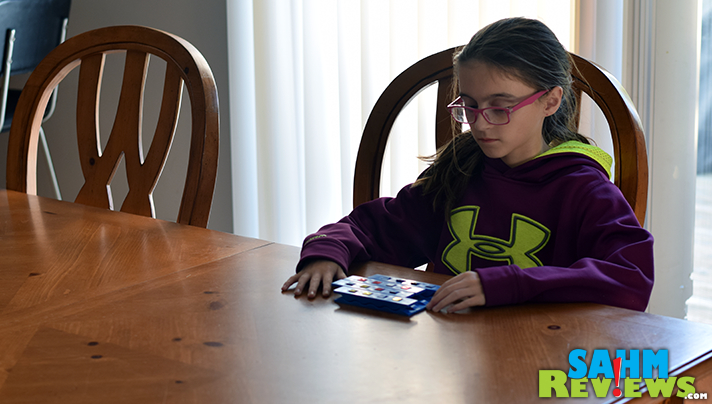 At its heart, Slideways is a variation on the old classic Tic-Tac-Toe. Instead of pen and paper, R&R Games has created a well-made game “board” using plastic and magnets. Yes, I said magnets! More on that in a minute.

While the box says Slideways was designed for 2 or 3 players, we found the 2-player version of the rules to be much more satisfying. On the board are tiny suspended triangles that are turned Wheel-of-Fortune-style to reveal either a yellow or red side. Your goal is to be the first to get four in a row. 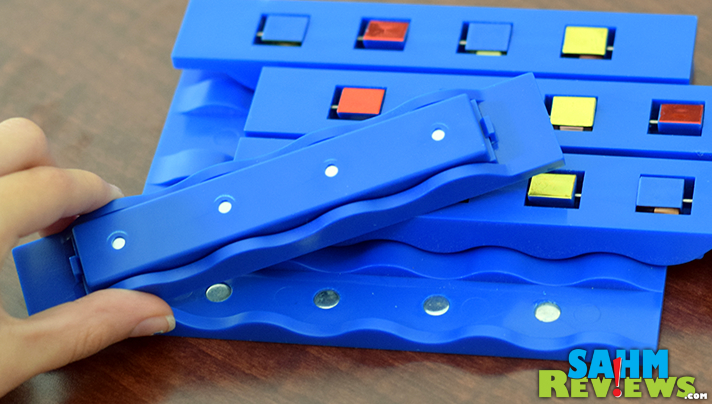 On your turn you have two options. Turn one of the triangles to your color (except the one your opponent just turned), or to slide an entire row to the left or right (again, unless the other person just moved it that direction). This is where the magnets come into play. Instead of having the rows simply nest into the plastic base, these are held in place by strong magnets that grip the block in position. Sliding to a side, they effortlessly snap in place. And since they don’t have the resistance of plastic-on-plastic, you’ll never find them hard to move or covered with the dirt that seems to get inside of other games like this.

Alternate turns until one person has finally managed to line up four in any direction (even diagonally). You can expect a round to last under 10 minutes, and again thank to the magnets, Slideways is also a great travel game. No pieces to fall out and lose and easily passable between players in the car.

At around $15, I think you’ll find Slideways to be worth every penny. Readily available on Amazon or direct from R&R Games and still plenty of time to make this a stocking-stuffer. While they have it rated for ages 8+, if your child is old enough to play tic-tac-toe, they are old enough for Slideways. Don’t forget to check out R&R’s Facebook and Twitter timelines for exciting holiday news, including a giveaway announcement or two!

But we want to know, how many games are you planning on buying this holiday season?

22 thoughts on “Is Slideways a Puzzle or a Game?”