There’s something to be said for games that have a lot of value. What I’m usually referring to are those that are fun to play over and over again, each time presenting a new challenge or at least game play that doesn’t get old over time. Many of the games we talk about continue to be enjoyable and challenging months and months after our first play. Boxcars, AquaSphere, Stockpile and Why First? are but some of the great titles that have become a permanent part of our collection.

But another seldom thought of feature is that of game box size. Game boxes trend to larger sizes to take up more shelf space (better display) and to deter shoplifting. To me there’s nothing worse than buying a game (or anything for that matter) and open it up to discover a ‘box of air’. Half-full boxes of cereal annoy me enough, I don’t want my games to fly around loosely inside of its box either (cough – Machi Koro – cough).

So for the next few game articles I’m going to focus on titles that not only offer good play value for your money, but also come tightly (or at least correctly) packed in small, easy-to-carry boxes! You’ll be amazed at just what is out there!

A good example is the game we’ve been playing this week – Stones of Fate by Cosmic Wombat Games. Although the box is only 4″ x 7.5″ x 1.5″ and usually under $20, you will find much greater value in this tiny package.

Designed for 2-4 players, Stones of Fate is what I would call an area-control card game. The game is started by dealing nine cards face up to the middle of your table, forming the play area. Each person takes some time to study the cards, noting its bonuses and win criteria. Then all of the cards are turned face down. 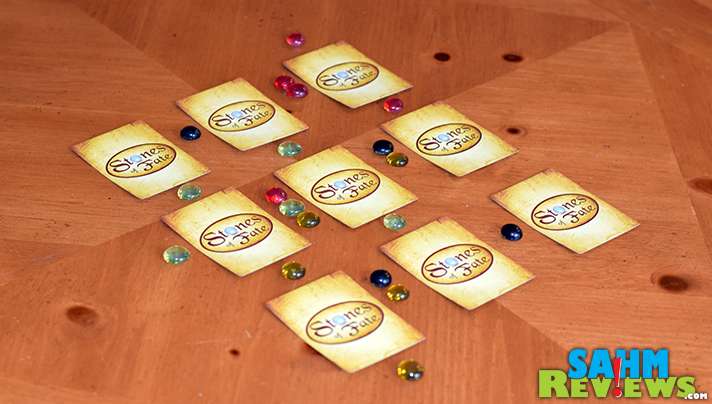 Each person has a pool of five colored stones in their player color. Taking turns, you ‘bid’ on cards by placing them beside the now-hidden cards. Each side of the card has a different symbol that will determine who wins the card once it is flipped over and resolved. Obviously, a good memory of what those cards were to start with is necessary!

One your turn you are able to perform two actions from a choice of three. You may also elect to do two of the same action if desired. 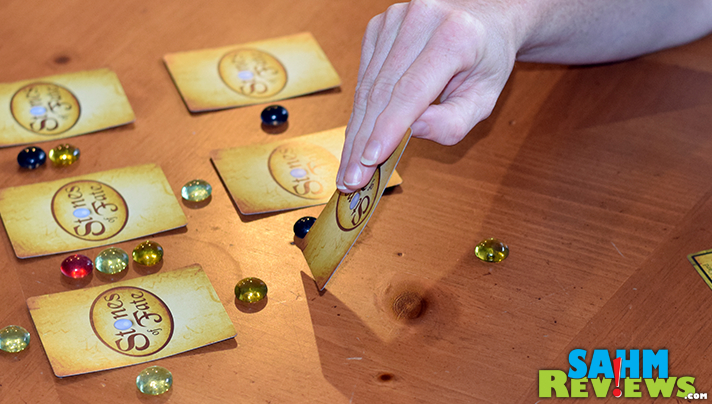 You might choose to peek at a card to help remind you what you are bidding on. 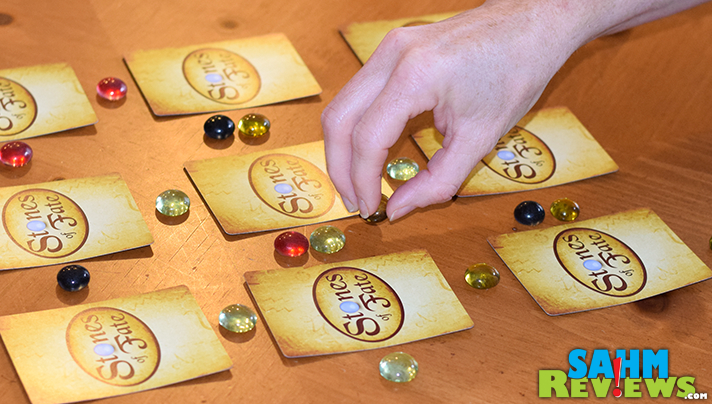 Or you might decide to place or move a stone to a new location. 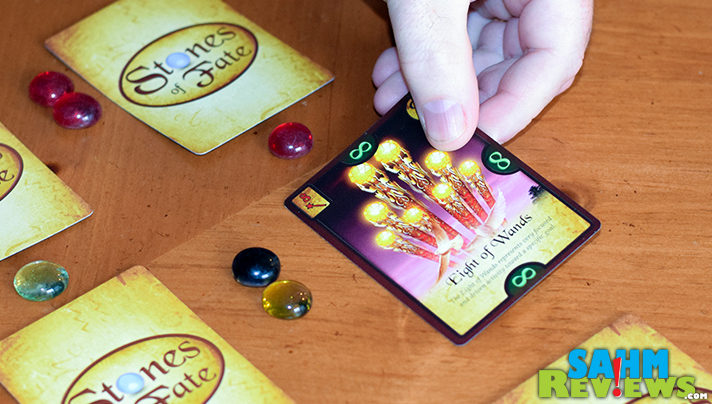 Finally, you can elect to flip a card over, activating any special abilities and resolving who (if any) win the card to their hand. 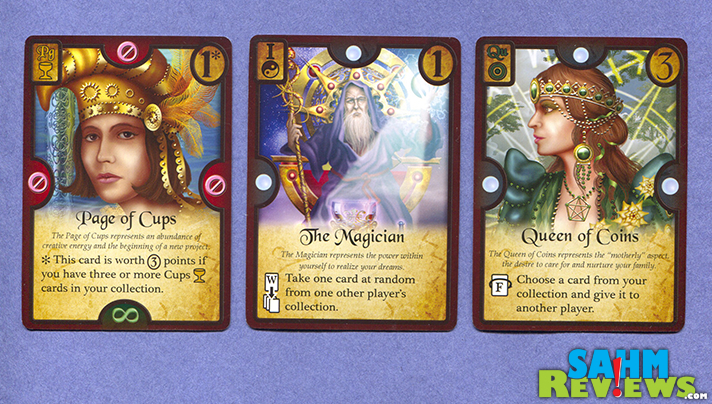 Each time a card is won, it is replaced by a new card from the draw pile with all stones remaining in place. Every card has a set number of points it is worth (victory points) at the end of the game, and you’re obviously trying to be the player with the highest number.

Once all cards from the draw pile have been played (determined by the number of players), the rest of the cards on the board are immediately flipped and resolved as normal, but without the special events. Again, the player with the greatest number of points wins the game.

Each full game should last around 30 minutes and thanks to the number of included cards (82), you’ll absolutely never have the same game twice. In fact, even with a full compliment of four players you will only use half of the deck! While it wouldn’t work as a travel game on a plane or in a car, the small box size will make it very easy to throw in a suitcase or carry-on for play at your hotel or vacation destination!

Find your own copy on Amazon or direct from Cosmic Wombat Games! Be sure to follow them on Twitter and Facebook as they have a new one in the works that is perfect for the upcoming election season!

12 thoughts on “Another Surprise in a Small Package”