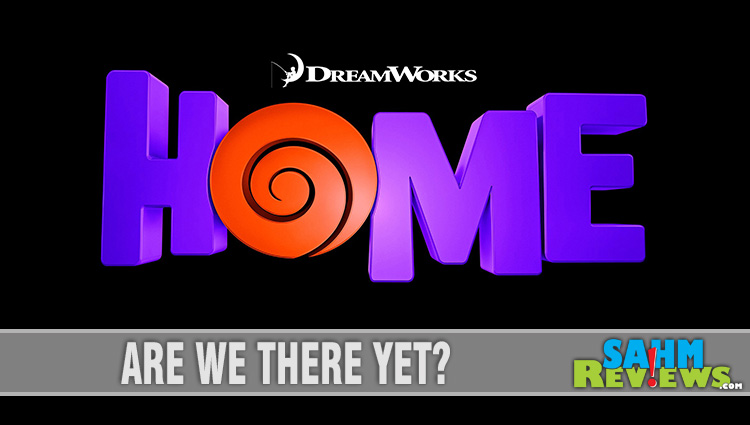 The Boov are Invading Theaters

The other day on Facebook, a friend shared a cartoon featuring a guy sitting in the waiting room at a vet with the doctor standing next to him. The captain read “About your cat, Mr. Schrödinger – I have good news and bad news.” Regardless of what I may have learned about science or psychology through school or life, my understanding of this cartoon is 100% attributable to being a fan of The Big Bang Theory.

We’ve seen all the episodes so we’re able to let the girls watch when we know the subject matter is kid-friendly. They are mini-me geeks and enjoy learning about things like non-Newtonian fluid.They enjoy the show, but especially think Sheldon is hilarious. We all do. His quirky behavior combined with his comments and mannerisms make him quite memorable. When the girls saw that he would be the voice of “Oh” in the DreamWorks Animation movie, Home, they insisted on seeing it. Honestly, I didn’t say no simply because I thought it would be pretty cute, too.

It released in theaters this past weekend and had a spot on our to-do list. We were busy on Friday and Saturday, so I decided to check the reviews on Rotten Tomatoes before outlaying the funds on Sunday. I was surprised to see that the reviews were mixed. The critics hated it, but consumers gave it a good rating. We’ve never been one to rely on critic feedback. After all, they didn’t like Starship Troopers which is one of our favorite movies. In other words, we would definitely be seeing it.

DreamWorks Home is about a race of aliens called the Boov who invade Earth as they flee from their predator. In order to make the planet habitable for their arrival, they relocate all humans to one part of the earth. A little girl named Tip, voiced by Rihanna, was inadvertently left behind along with her pet cat, Pig and crosses paths with alien outcast/fugitive, “Oh” (voiced by Jim Parsons) as they both attempt to hide from other Boov. The story revolves around Oh agreeing to help Tip find the location of her mom. Along the way, they learn a lot about each other – and themselves. I could lay out the entire plot for you but honestly, if the trailer appeals to you then you will probably like the movie. 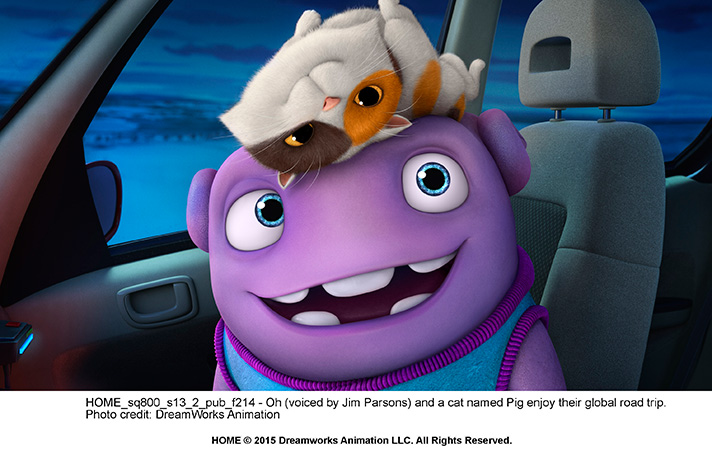 As someone who is a fan of Jim Parson’s talents, it was cool to see how the animators were able to convey those same facial features, mannerisms and emotions through his cartoon character. He would make comments and move around in goofy ways that made it easy to picture Sheldon. Even if I hadn’t liked the movie (which I did), seeing an animated version of Sheldon was quite enjoyable. I thought it might be distracting but the similarities in the characters actually helped add to the big picture.

The basis of the movie itself is that Oh is an outcast from his community because he always makes mistakes. It may be an animated movie but it’s filled with emotional triggers. Just like Oh conveys his emotions through the color of his skin, I wear my emotions on my sleeve. Scott managed to catch me crying more than once. Of course, I laughed a lot too.

You can see additional footage and images on the DreamWorks Home on Facebook or on their website. I encourage you to watch a few of the different trailers as they offer a variety of characters, content and parts of the plot. Regardless of what the critics say, I thought it was well worth the price of admission.

Are you planning to see DreamWorks Home?

15 comments on «The Boov are Invading Theaters»