Home / Giveaway / Eyes for the Back of My Head 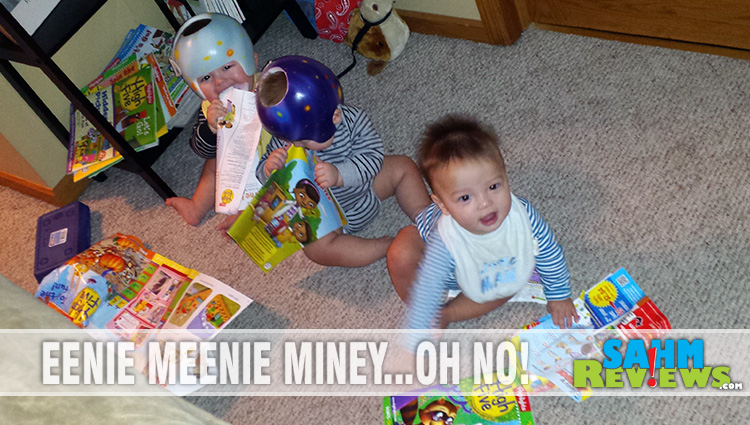 Eyes for the Back of My Head

TRIPLETS. I’m still shocked on a daily basis that I’m the mother of triplets. They are 9.5 months old, and to say they keep me busy is an understatement. They are all crawling super fast, pulling up on anything and everything, and beginning to cruise along furniture! Aye-I-I-I!!!

Add in our lively 4 year old daughter to the mix, my hard-working husband, and our cocker spaniel (Winky) and someone is always needing something. Every minute they are awake I spend keeping the kiddos fed, clean, entertained, and safe! There are moments every day that I wish I had eyes in the back of my head. 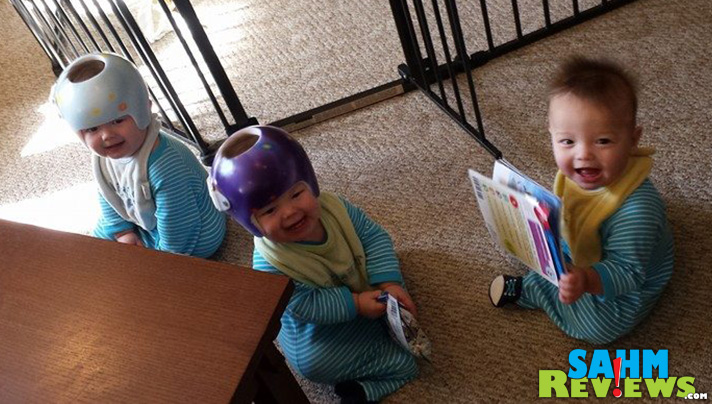 Note to self: Always make sure baby jail door is LATCHED.

Around 6pm, the countdown to bedtime begins. Bedtime is always a welcomed time of day for my husband and me. The babies and our daughter are great sleepers. The boys have their last bottle at 7pm and then sleep through the night (in general), and my daughter goes to bed around 8/8:30pm.

We’ve had a video monitor in my daughter’s room since she was born. Once we found out we were having triplets, I knew we needed something in addition for the boys’ room. With THREE cribs to view, I’d need more than a stationary camera (like what we used for our daughter), and so we decided on a ‘fancier’ video monitor with a camera that would pan, tilt, and scan the room.

In the beginning, I slept in their room with them for several weeks, and as they grew, it finally came time to begin their sleep training. I knew I’d be ok with a bit of fussing from the babies, but having a video monitor was SO helpful in easing my urge to go to them every second one of them fuss because I could see what and how they would be acting in their cribs.

While the model we ended up choosing for the boys’ room does the job, I quickly learned that it does interfere with the one we use in my daughter’s room (they are different brands). They cannot both be turned on. It also loses it’s signal in certain areas of our home. That was easy enough to work around, but when presented with the opportunity to try the Levana Keera video monitor which came with TWO cameras, I excitedly accepted. Anything that I think will make my life a bit easier is worth a try! 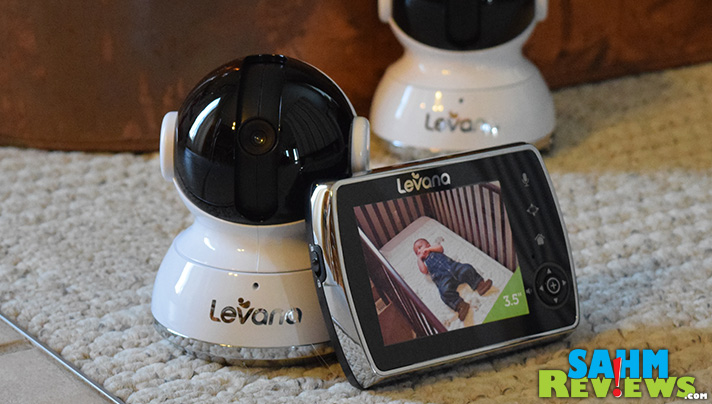 Setting the cameras up and getting the monitor ready to use was super simple! The cameras come with mounting hardware. Until I was sure of the placement, I just used a nail in our wall. The monitor just needed a battery installed (which was included) and to be plugged in to charge. 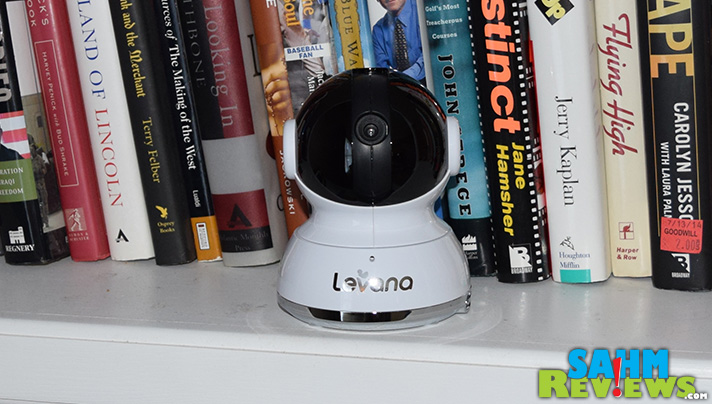 I found the monitor directions online as referenced on the Quick Start Guide that’s included. I put the boys down for their morning nap, and quickly scanned the manual. Then, it was time to try out the different options and features!

Moving the camera to scan the room and view all my boys was super simple. However, the button to zoom in, is located in the middle of the directional pad, and I often hit that button on accident, which is kind of a nuisance, but something I assume I’ll get used to. It does have a feature to lock the buttons which is a bonus. The picture is fairly clear with both lights on or off, and I felt the viewing screen size on the monitor was sufficient.

Sound had several volume options or could be completely off. The level of sound is also indicated with the light colors around the directional pad.

I wasn’t able to explore all the features much further during their nap because I had to take some time to eat some brunch, fold some laundry, and complete some work for the business my husband and I own. Time flew (as it always seems to do” and I suddenly heard some babbling on the monitor, and saw that it was Tucker (as usual) waking up. 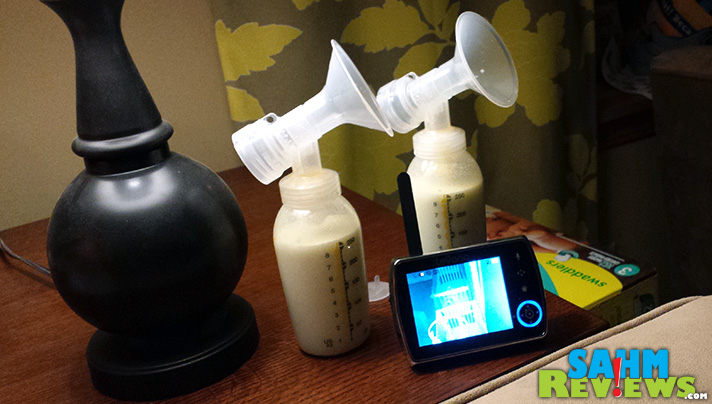 That evening, once my daughter was in bed, I collapsed on our couch for a few minutes before beginning my nightly tasks of dishes and preparing lunch for her tomorrow and tidying our kitchen and living room before sitting down (to pump breast milk for the boys and) to watch some TV with my husband. It was so convenient to be able to view both my daughter and the boys’ rooms with one system. There are options to view each camera manually as you choose, to have it automatically bring up each camera in a rotation, or to have all cameras in view on the screen. LOVED this feature.

After a while, my husband and I headed to bed. I noticed that this system also briefly lost it’s signal in the same areas of my house as our old system. When this happened, the screen just turned white and had the ‘lost signal’ graphic. There was no other warning. Our other system beeped when it lost signal, and I appreciated that warning, and wish this system alerted you if something was wrong. If I was sleeping, how would I have known that the monitor wasn’t working?! This actually worried me the most.

At night I usually turned the screen off on the old system, and just kept the sound on. Unfortunately, there is NOT an option like this for the Keera system. The screen is always on, and it is somewhat bright (as it should be to have a good picture). I like the screen off at night with our old one. The Keera system advertised an awesome feature that also piqued my interest called “Peep Mode” which basically turns off the screen after 45 seconds of inactivity, and would only turn on once sound was picked up from the cameras. In theory, I thought this would be great! I wouldn’t wake to ever little peep and cough from the boys (there are even sound sensitivity options!). But, I found that for my kids’ rooms, since all of them sleep with sound machines, the Peep Mode isn’t as helpful as I imagined since the sound machines are loud enough to activate the screen constantly anyways. Oh well, that’s my choice to have sound machines in their rooms. 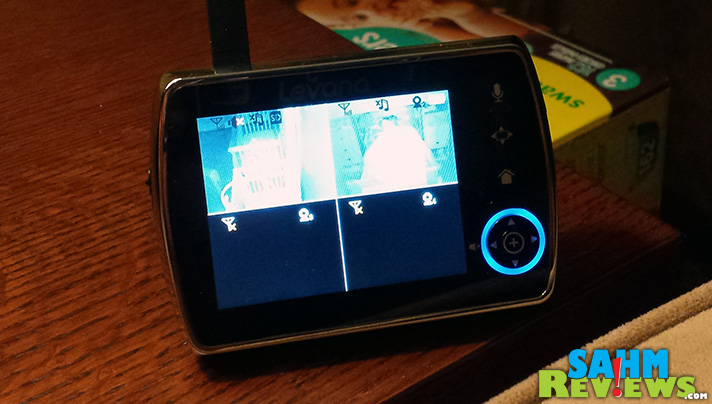 Maybe it’s a feature that I just haven’t figured out yet because this monitor has a ton of options and fun capabilities! As an example, being able to take pictures and videos (they are saved on the SD card that comes included with the system – the adapter is also included to be able to transfer the pictures and videos). I can’t even imagine the kind of trouble and antics the boys will get themselves into as they grow when the are supposed to be sleeping. And, I anticipate being able to capture a few great pictures and videos down the road.

Like my other monitor, this one also has a few lullaby options to play in their room, and also a microphone feature. What I miss with this system is the warning beep if the signal from the camera is lost, and the temperature reading that my other one provides.

But what I love about this system the most is the multiple viewing options for the 4 cameras, larger and clearer viewing screen, and the picture/video options. With any video monitor, you have to pick and choose which options and features are most important for you and this one has plenty of positive features – especially for the price. For the month of November, the Levana Keera system is only $179.99. $50 of their regular price of $219.99!

Overall, this Levana monitor system is fairly user-friendly and has several features that are both helpful and fun for the parents. Having a video monitor allows me to relax and feel a sense of security with my babies and daughter. I love being able to go to bed each night with the comfort of knowing that I can check in on them in an instant, and that I’ll be alerted if any issues arise. I also love being able to visually view them to determine the level of their distress, and so that I’m not interrupting the babies any more than necessary…because believe it or not, my boys actually do sleep through each other’s cries most of the time!

And…now that I can see the kids are safe, it’s time for Mom to get some sleep!

Meg is mom to a beautiful preschool daughter and young triplet boys. She's married to her best friend and partner in their family business. When she isn't busy with her kids, she enjoys date nights with her husband, ice cream, and of course, blogging. View all posts by Meg →

52 comments on «Eyes for the Back of My Head»