“Go, go, go, GOOO! NOOO!” That’s my most vivid recollection from my days as an armchair football coach when I was a kid. I can still picture it today, the lineman ready to protect our quarterback. The running back lined up to take a hand-off. Wide receivers flung wide ready to run their routes. And the defense, looking confident but not realizing just what was about to hit them. And the buzz…

What? The buzz?  Don’t you remember the buzz while watching football? Oh, you thought I was talking about REAL football? No, I’m talking about the old-fashioned home game with miniature players moving down a vibrating field (hopefully in the right direction)! Sorry for the confusion!

I only call it “old-fashioned” because it has been around so long, but electric football is enjoying a resurgence in popularity among all ages. Today you have the luxury of different sizes of field, the ability to customize your players and thanks to the internet, a plethora of forums and sites that tailor to this hobby. There are even national organizations such as the National Miniature Electric Football League and the Miniature Football Coaches Association, as well as annual tournaments like TudorCon. You’re probably asking, “What is Tudor?” Keep reading.

In 1947, Norman Sas, owner of Tudor Metal Products and Tudor Games, created electric football. He used a vibrating car race game made by Tudor as the base and added small players which moved down the field as they vibrated. It was an immediate hit and more than 40 million of the games have been sold since its creation.

Their latest version, Red Zone Electric Football, is an entry-level offering suitable for all ages. But don’t let “entry-level” fool you, it has all the difficulty and nuances of their more expensive offerings. Enough to keep you challenged for many quarters.

By attaching small plastic ‘cleats’ to each base, the vibration of the field causes the player to move. The positioning of each cleat dictates the movement speed and direction of the piece and gives you ultimate control over every position. 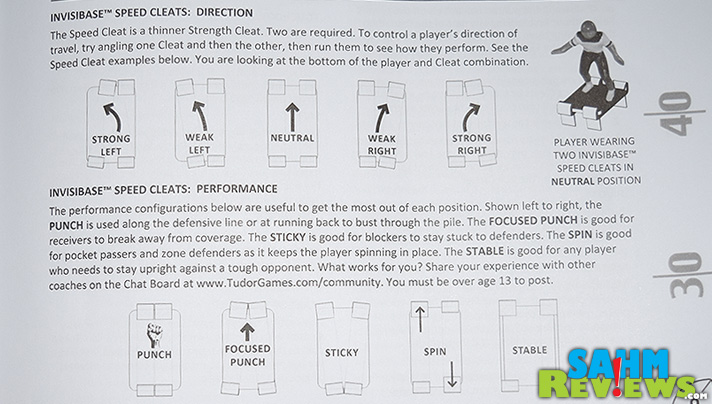 Just like in NFL football, you position the offense and the defense into their starting positions. The object is to move the ball forward towards the end zone by running or passing. First down lines are marked with plastic flags on one side of the field, while the scrimmage line is monitored by a flag on the opposite side. You have four downs to move the ball 10 yards (again, same as NFL rules) or lose possession.

Running the ball is straightforward – you simply dictate which player has the ball and he runs until he is either touched by an opposing player, falls over or turns around. You then reset all the players and begin your next down. Passing is a little more complicated, requiring interaction from you to pass the ball with the flick of a finger.

Still don’t remember the buzz? Here’s an example of one running play – once you hear the sound it will all come back to you.

Red Zone Electric Football comes with unpainted players, allowing you to customize them in your favorite team colors. They also include sticker numbers so you can identify each one. I can see the hobby of customizing them being as fulfilling as actually playing the game! 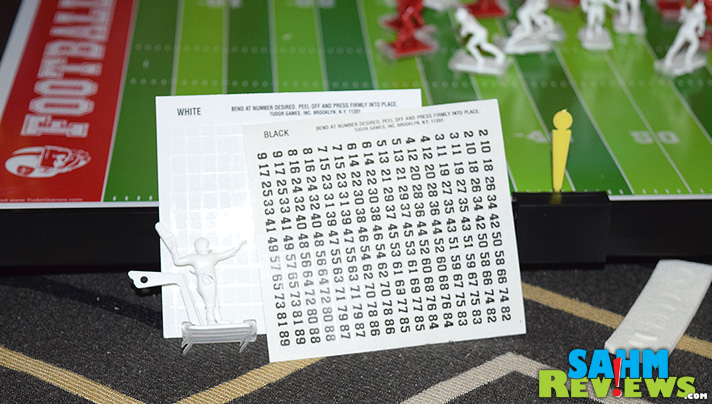 Fortunately for those of us that are paintbrush-challenged, Tudor Games is launching an officially-licensed NFL version that will be available direct from Tudor as well as at your favorite retailers. We’ll be picking up a set of Chicago Bears to play with since they can’t seem to pull off a real win at Soldier Field…

Check out all the current offerings from Tudor Games by visiting their website and following them on Twitter and Facebook. American-style football not your thing? They also have you covered with baseball and soccer!

After you have picked up one of the electric football games for the big and little kids in your house, impress them with your knowledge of the history of the sport by grabbing a copy of The Unforgettable Buzz: The History of Electric Football and Tudor Games. You’ll be an armchair coach in no time!

But wait, this post has now gone into overtime! Tudor Games has graciously offered to give away one copy of Red Zone Electric Football to one lucky SahmReviews reader! Entry is easy using the form below and there are daily options for entry so be sure to come back tomorrow!
Tudor Electric Football Game

52 thoughts on “Are You Ready for Some Electric Football?”