Years ago, in my pre-kid days, I was a consultant for Pampered Chef. I have this thing about kitchen gadgets and selling the products was actually an opportunity for me to buy them for myself at a discount. When products rolled out, we could earn them for free or purchase a new product kit at a discount for use in our demos.

For the longest time, I never used the Cut and Seal tool for making pocket sandwiches. Regularly said to myself that I would use them to make appetizers for a get-together. But I never did. I didn’t start using mine until a few years ago when the kids and I were at a standoff with what to eat for lunch. I wanted to make them a sandwich and they wanted nothing of it.

So I made them a peanut butter and jelly sandwich using the Cut and Seal and promptly said “They’re like little treasure sandwiches! You don’t know what is inside until you bite into it.”

They ate it up. Both literally and figuratively. Ever since, when they want a sandwich, they put their orders in for “Peanut Butter and Jelly Treasure Sandwich, please.” Actually, my 7 year old prefers it sans jelly so she asks “PBT, please.” 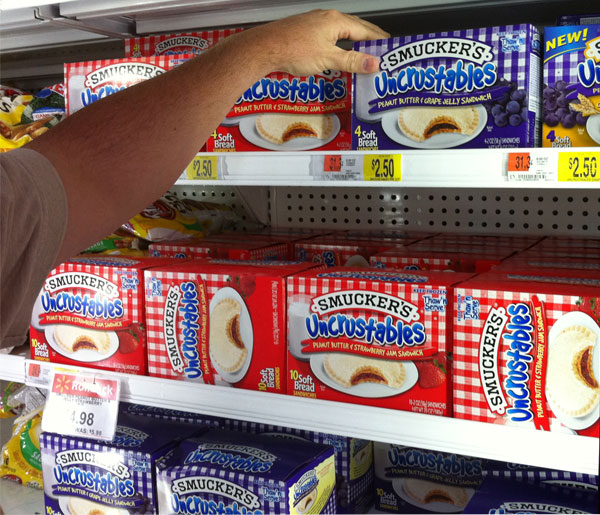 But sometimes the tool is dirty, sometimes the bread is too soft and it gets stuck in the crimper. Sometimes, I just don’t feel like going to the trouble. For times like that, I can call on Smucker’s Uncrustables. Miss K, my 6 year old, takes after her dad and loves grape jelly.  So we hit the store and picked up a package of Smucker’s Uncrustable Peanut Butter and Grape Jelly Uncrustables as opposed to the Strawberry flavor that didn’t go over well the last time I bought it.  Nothing against Smucker’s, it just seems that I’m the only one in the family who likes non-grape flavored jelly.  Both Strawberry and Grape are also available on Whole Wheat bread, in addition to Peanut Butter and Honey on Wheat Bread.  I only saw one of the Wheat options at our store but we opted for the regular white bread this time around. 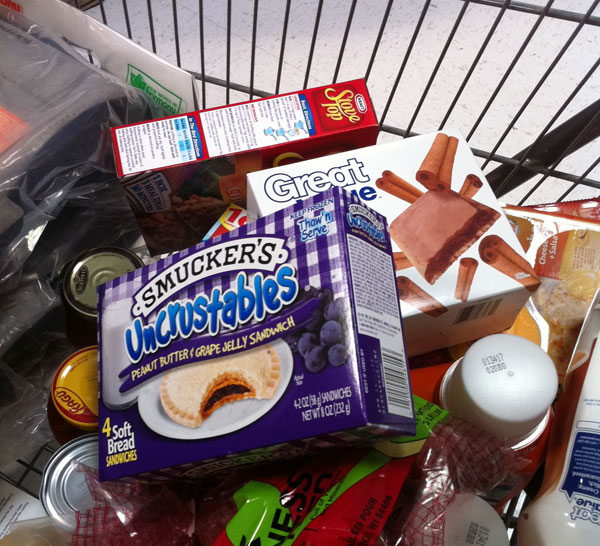 The interesting thing is that prior to this campaign, my 7 year old insisted on Peanut Butter ONLY sandwiches. Because it was for a blog tour, I wanted to push the envelope for opinions from the kids. So I snuck a grape jelly Uncrustable sandwich into her lunchbox and she came home raving. Apparently, it made her a believer in the concept of jelly on a sandwich. I’m not sure if it was the novelty of having something new or the fact that I didn’t give her an option and she HAD to try it.  Either way, she’s a fan of Smucker’s Peanut Butter and Grape Jelly Uncrustables.My 6 year old, on the other hand, hoped her sister wouldn’t like them because that usually means she gets the entire box to herself when we buy it.  She’s more open to trying new things and often ends up with an entire box of (whatever) to herself before her sister caves in and finally tries it… and usually likes it.  Miss K gets tons more variety in her lunch box than Miss M.

And when it comes to school lunches, we try to give the girls a lot of variety.  First, we ask whether they want the school lunch or a sack lunch.  The agreement is that they have to agree to eat the MAIN part of the school lunch and the decision cannot revolve around the side dishes.  Period.  Once they decide that they like the main part, then we look at the sides/dessert. 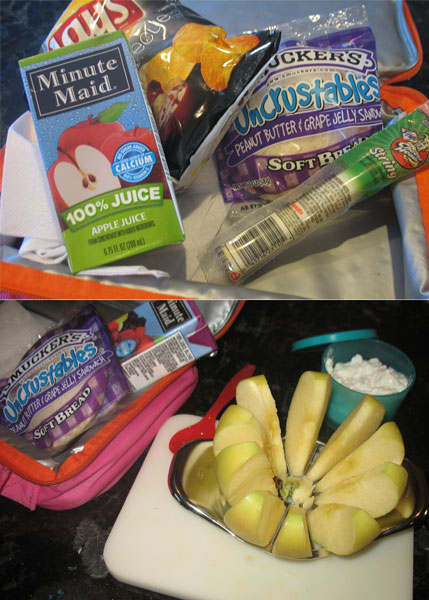 If the final result is sack lunch, then we try to mix things up even more.  We try to have a good mix of stuff.  Sometimes we let the girls pack a Lunchable but more often than not, it is a traditional lunch: Sandwich, with cheese stick, cottage cheese, hard-boiled egg, gummy snacks, GoGurt, fruit, chips, cucumbers or any other variety of things we drum up.  But the main part of the meal is still the sandwich.  We alternate between various lunch meats like turkey, pastrami, ham, roast beef and bologna as well as peanut butter and jelly.  Adding Smucker’s Uncrustables to the list was quite a popular choice!  Miss K came home explaining that one of her classmates wanted her mom to buy some too.

I think what I liked most about Smucker’s Uncrustables is that  (like GoGurt) you put them into the lunchbox frozen and by lunchtime, they are thawed to a good temperature for enjoying.

The only thing that I didn’t like was the box only contained four and it was $2.50 at our store.  When you buy a larger box, the price per unit gets a little better and of course, with a coupon it’s even better than that.  At least I know that when I put one in their lunchbox, they’ll eat it.  Doesn’t matter how inexpensive something is if they end up throwing it in the garbage. 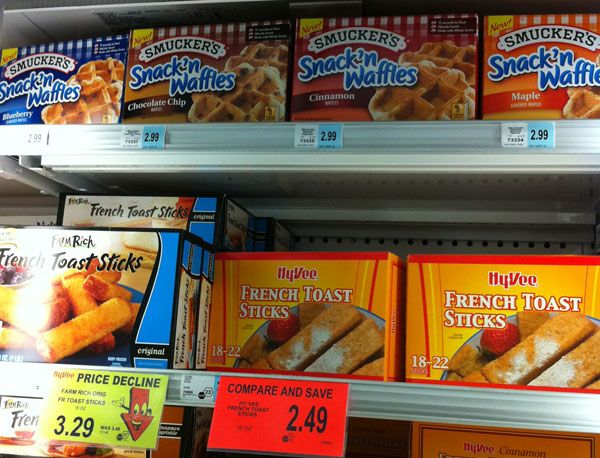 As a bonus part of the campaign, we received a coupon for Smucker’s Snack’n Waffles.  We couldn’t find them at Walmart but did locate them on a later trip to HyVee.  Miss M was on that shopping trip with me and we delightfully chose the Chocolate Chip variety!   Other choices were Blueberry, Cinnamon and Maple but it took no thought at all to grab the Chocolate Chip.  They had originally thought it would be perfect for breakfast but I showed them the size and explained tha they are better as a snack.  Those became a surprise treat inside the girls’ lunchbox on a day when they had a deli meat sandwich! 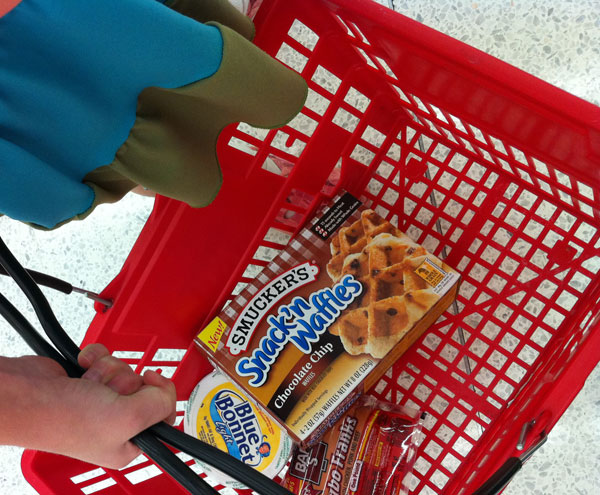 To my dismay, both the girls came home excited.  “Those were YUMMY!” Part of me really hoped they wouldn’t LOVE these so that I could personally consume the remainder of the box.  Alas, the children and their lunchboxes prevail.Overall, we were really excited about how well the girls liked both the Smucker’s Uncrustables and the Smucker’s Snack’n Waffles.  When you’re constantly eating the same thing, it’s nice to have something around to spice things up.

5 thoughts on “Sandwiches with a Treasure Inside”