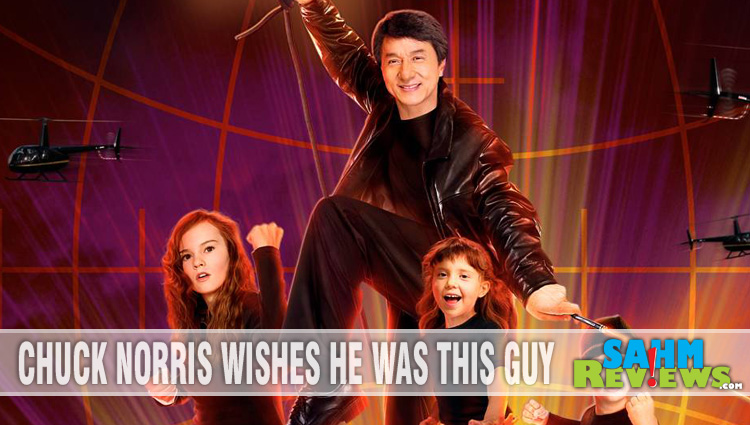 When you think of having a family movie night, what comes to mind? Well to me it involves a couch, blankets, pillows, snacks and drinks and a fun movie. What movies does your family find interesting? Personally, I usually will go for a comedy or action movie. For example, just in the past weeks I have watched Indiana Jones and the Crystal Skull, as well as the first season of the BBC comedy series Chef!

I was pretty excited this past week to be given The Spy Next Door. Have you heard about it? It features Jackie Chan, George Lopez, and Billy Ray Cyrus as spies. Course, it also features a pig, a kitten and a turtle as pets! The only thing I knew about this movie was that it was an action, spy movie for family enjoyment.

So last night, with bagel pizzas and gummy worms in hand, we sat down to watch The Spy Next Door. One of the first things I noticed was that it was definitely a kid friendly movie. The comedy was great for kids and adults. In fact, the movie is rated PG, for the sequences of Action Violence and some Mild Rude Humor.

Some observations about the movie:

In one of the scenes near the beginning, Harrie and I both noticed that Bob (Jackie Chan) floated down from the roof when he was rescuing the cat. I am not sure kids would notice that it wasn’t very realistic that Bob floated instead of jumping and landing a bit harder, but it caused us a little laugh and a bit of discussion.

There were definitely also a few action scenes that could have been more realistic and less obvious that there were wires involved in the stunts, but overall the stunts were great and funny. One of the other scenes we noticed that could have been worked on a bit more was the bike scene towards the end. Keep your eyes out for it!

While there were 3 female characters, Harrie and I both agreed that this movie had a strong boy influence in it. The young boy, Ian, was a character your heart went out to. We cheered him on during a few scenes as well as boo’ing when we wanted him to make better decisions at school. I’d have to say the overall storyline was positive for kids. I’m sure that this movie could definitely lead to some great family discussions about honesty and responsibility.

View all posts by Mel →

2 comments on «A Friday night full of spying fun!»