Home / Food / Every One Starts as a Vegetarian 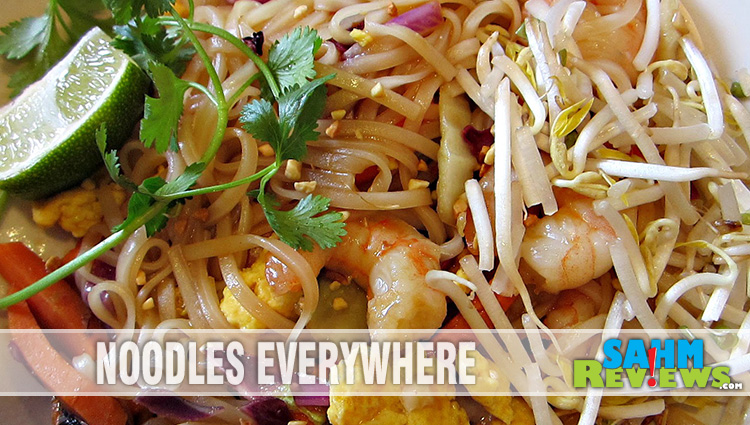 Every One Starts as a Vegetarian

As a parent, between classroom volunteering, shuttling between extra-curricular activities, play dates and field trips, it’s just exhausting. As the end of school gets closer, just like the kids, I count down until summer break. For me, it’s so the schedule would ease up and I could actually get some things accomplished.

Well… It’s summer time. The kids have been out of school for what seems like a month now. What was I thinking? Get something accomplished? Somehow I managed to forget that summer vacation doesn’t mean relaxation, it just means no school. While the girls have a toy of every kind available, they don’t want to play with them. All I hear is “Can we…? Can a friend come over…?” So the chaos isn’t gone, it just shifts from the school building to our house. It’s all about trying to coordinate play dates and things for the kids to stay busy (that don’t always involve some kind of electronic device).

At least lunch should at least be easy, right? Mostly. Miss K is content with a sandwich or something healthy. Miss M? Well, she always asks for Mac and cheese. Wish I had bought stock in Kraft a few years ago. It wouldn’t be so bad except she never tires of it.

So when Mom Central sent out requests for the Noodles & Company blog tour, my first thought… “Oooh. Someone ELSE can make make and cheese for the day.” Aside from that, I had an underlying interest in the tour because of the company’s roots here locally – the founders having graduated from Augustana College.

Well the other day we ventured off to Noodles & Company.  Although this branch has been open for a few years, we’ve only been there once.  It’s close proximity to our house in a bustling part of town but it isn’t our first choice for a restaurant.  We didn’t have any problems with the restaurant itself… actually, we thought the food was very good. The problem we have is the location. More specifically, the parking lot. Our Noodles & Company shares the lot with a Starbucks. The Starbucks drive-thru traffic makes parking a bit challenging. Since the tour came available, it was a good opportunity for us to see if the parking issues were finally ironed out.

Noodles & Company is a semi-fast food restaurant. When you walk through the door, you place your order at the counter. It’s been a while, so the girl at the register quickly gave us a refresher course in how to order. The menu is broken down into sections. American, Mediterranean and Asian. Within each section it’s subdivided into pasta, soup and salad. Our vouchers were good anything but we wanted to make sure we spent them wisely enough to give a thorough review. Basically, we were shooting for a regular meal with a protein. There is so much to choose from… but where to start? 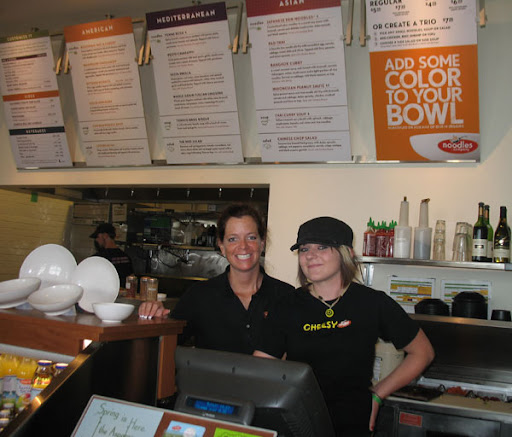 The meals on the menu are some suggestions but they aren’t set it stone. The employee said “Every one starts as a vegetarian…” from there you decide if you want protein added to it. Protein choices include chicken, beef, shrimp or tofu. They also incorporate seasonal ingredients, such as asparagus, into their menu. Ordering for the girls was easy… Wisconsin Mac and Cheese with Parmesan Crusted Chicken. The servings are large and the girls are small so we opted to have them split one.

I’m a fan of penne pasta so I selected the Penne Rosa. “Spicy tomato cream sauce sauteed with penne pasta, mushrooms, tomato and spinach. Topped with feta or Parmesan and Italian parsley.” I opted for the Parmesan along with the Parmesan Crusted Chicken.

DH’s choice was little more difficult. He likes stroganoff but “Mushroom Stroganoff” wouldn’t work because he’s not a fan of mushrooms. “You can order it without the mushrooms.” Sold. He ordered the Braised Beef because the menu says “Great with Braised Beef” and since we’re here for a review, figured we would work with the suggested item.

As with many semi-fast food restaurants, numbers are assigned at the register so you can have a seat while you wait. The numbers assigned at Noodles & Company are more creative. They double as trivia and a marketing tool. As an example, ours was 3 and contained a description of the Trio item from the menu. The table next to us had a 110 and another said 2.6. 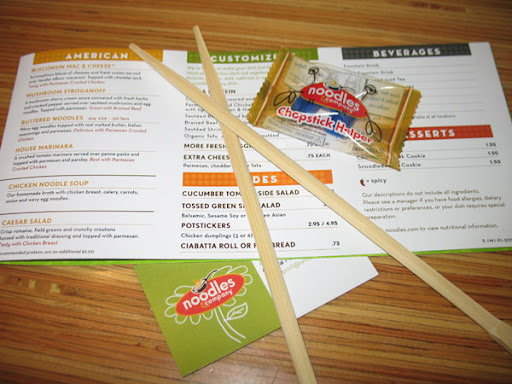 Before finding a seat, we filled our drinks and picked up some things from the condiment station. Makes sense that since they serve Asian food they need chopsticks. Was kind of cool to find packs of “Chopstick Helpers” for beginning chopstick users.

The place had a variety of sizes of tables and booths indoors as well as an outdoor seating area.  When we sat down, I pulled out my iPad to kill some time (and take some notes).  For reference, it is not a WiFi hot spot. 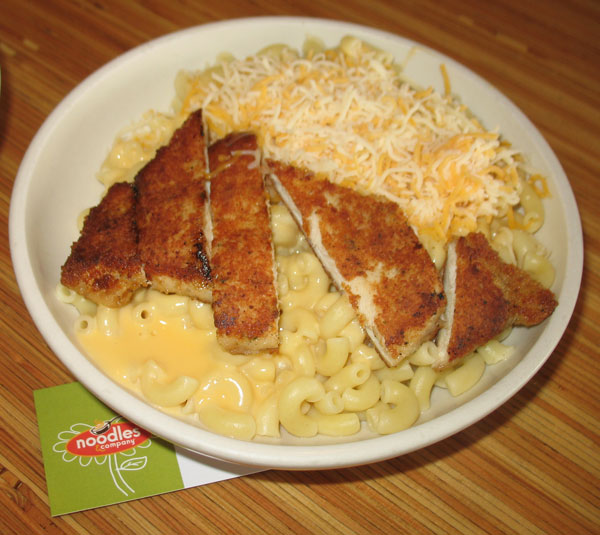 Our food was delivered after a very short wait.  Each arrived with fresh grated cheese on top.  The Wisconsin Mac & Cheese arrived with the noodles hot and waiting for the cheese to be mixed in.  The chicken on top was a decent size, too.  We seldom let the girls order Mac and Cheese while at restaurants because experience has taught us two things… it’s either very expensive powdered mac and cheese or it’s a fancy noodle that they don’t like.  We knew this was fresh cheese because you see it when it arrives… and since it’s a ‘pick your own’ menu, we knew they would like the noodles.  When the girls were done eating, I asked what they thought and they said it was good.  They both avoided the one rogue penne that ended up in their order though.
Even with the two sharing the one order, there was still enough left over to take home for Miss M to enjoy later. 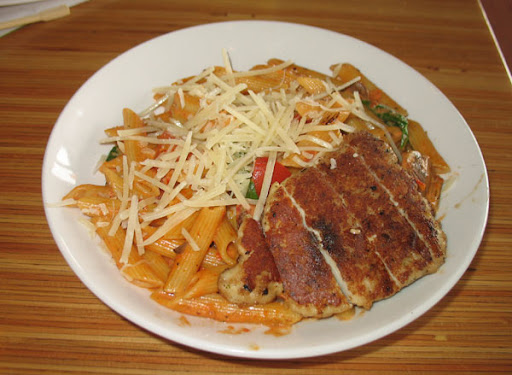 Since I was working on a review, I made sure to take the time to photograph all the food before we started eating.  I photographed the kids’ food first then DH started to mix it up.  By the time I photographed and started mixing mine, it had already started to cool off.  The taste was good but the cheese didn’t melt like it should have.  That had nothing to do with the order but with the process for the review.  My dish was very simple and kind of rustic.  Although I enjoyed it, I would probably try something different next time.  I’m partial to creamy and rich pasta sauces like an alfredo.  The chicken, however, was delicious and I certainly would add that to my meal next time also. 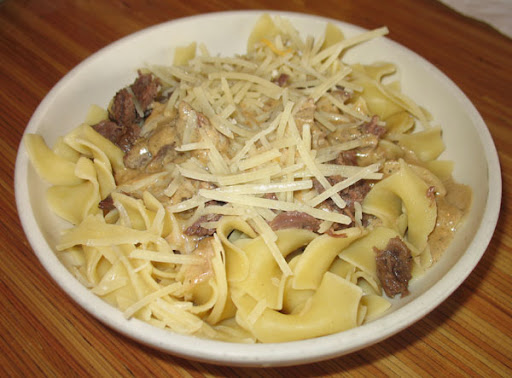 Now DH’s is where I had some concerns.  It was a mushroom stroganoff without the mushrooms.  I was skeptical that it would be bland.  When I asked DH what his thoughts were, he said “It started kind of dry…But as it sat and the cheese had time to melt and the flavors blend, it tasted really good.”  He said that  next time he would let it set longer before eating it.

The staff was very helpful, stopping by to make sure everything was good.  They even made a point of supplying a separate bowl since we were having the kids share the meal.  I noticed that there was always someone working the room – clearing empty bowls and wiping down tables.  As soon as my bowl was empty, someone whisked it away. 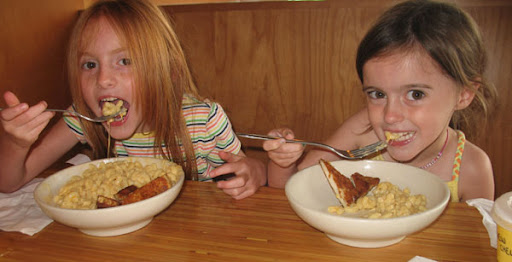 We all enjoyed our meal and parking didn’t seem nearly as difficult this time.  It was nice to have someone else making the mac and cheese.

One comment on “Every One Starts as a Vegetarian”