I read a *lot*, averaging more than one book a week, and close to half of what I read is non-fiction mostly spread across history, biography, autobiography, and memoirs. I actually prefer autobiographies and memoirs because it tends to bring a much more personal touch to events rather than a list of facts and figures. Is there anything more boring than reading about a battle that goes on and on with lists of commanders and numbers of men on the field in this position or that? Give me the observations of someone who was right there doing things and seeing things first hand then reporting them and his thoughts about it all in his own words instead any time.In keeping with that, usually when you think of memoirs you think of famous retired generals or politicians or other people who were close to important, historical events writing about their recollections. Or they’re written (or “as told to”) by celebrities or “personalities” of the moment. 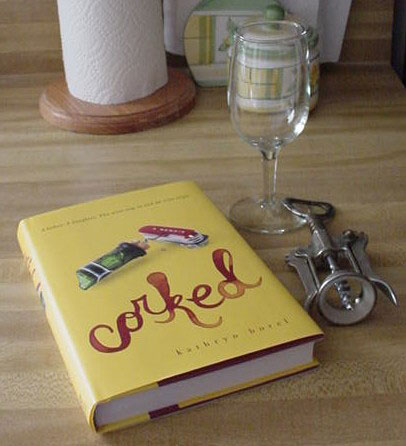 Corked is by none of the above, no one famous or even near-to-the-famous. It’s the memoir of Kathryn, an ordinary twenty-something woman, relating a wine tasting trip to France she and her father, Phillipe, take together one fall. But it’s not the squishy, sentimental feel-good story you might imagine. There’s a history there, and some of it isn’t very pretty. Interwoven with the wine tour are stories of her often stormy past relationships with her father and significant others.

Lurking in the background of this trip was a life-changing event that had sent Kathryn into a terrible depression. An automobile accident, in which she was the driver, occurred on a visit home from university several years ago and resulted in the death of an elderly pedestrian. Although ruled an accident by the authorities, Kathryn has not been able to shake off the effects of the incident. Making matters worse in her mind is her father’s inability to relate to her or comfort her through this catastrophe. Jumbled up in all of this is Kathryn’s heightened realization that her father could die without the two of them truly understanding or knowing each other.

Since Phillipe’s greatest passion is his love of fine wines, Kathryn decides that the perfect way for the two of them to bond and share would be to travel to France for an intensive two week tour of famous winemaking regions and wine tastings. It’s during this trip Kathryn hopes to both finally live up to her father’s expectations of her and exhibit the knowledge of wines that Phillipe has attempted to impart to her over her lifetime while she, in turn, is learning more about him.

The trip does not go well. Beginning with Phillipe’s food poisoning from airplane food and moving on to Kathryn’s constant fear of not living up to her father’s expectations during the wine tastings, all the way through the leftover dregs of Kathryn’s breakup with her boyfriend back home. Bad food, bad service, and bad navigation as they drive across France add up to short tempers and many harsh words.

Not all of the tour is conflict, however; there are times when Phillipe opens up to Kathryn and tells her stories of his childhood in France during World War II, what prompted his family to emigrate to Canada, stories of his father, and of his early hardships in Canada. All of this is new to Kathryn. Perhaps there is hope for them after all.

I’ll admit to not being a wine fancier. I know that if it comes with a screw-off top, it probably isn’t gourmet quality. And I know it comes in shades of red and white and bubbly or non-bubbly. After reading this book, I have a much greater appreciation and knowledge of what goes into making a bottle of wine. I can now see the words “Grand Cru” on a bottle and know that that’s the really good stuff plus all sorts of tidbits of information about varieties of grapes, naming conventions, and that sometimes a little fungus on the grapes is a Good Thing.

One important piece of information that I didn’t get directly from the book was the significance of the book’s title. I got a clue that there was more to the term in the context of an incident related in the book, but it took an Internet search to grasp the meaning of the term “corked.” It seems that “corked” refers to an impurity in either the cork or barrel that is imparted into some wines during their processing. More simply, it means that the bottle of wine is off, or ruined. (For a more detailed explanation of this phenomenon see CellarNotes) In keeping with that, it would seem that their wine trip was Corked, Kathryn’s relationship with her father was Corked, and her relationship with her ex-boyfriend was Corked. Her life is a mess, and the book reports this mess in agonizing detail.

Oddly enough if this book had been fiction, I probably would have enjoyed it more. Reading this as the report of actual events occurring to actual people, I found myself feeling like a voyeur into these deeply personal events and their reactions to each other. The stories Phillipe tells of his father and wartime France are what I enjoyed most in the book, perhaps because it is part of the now distant past and the telling of these stories will not injure or embarrass anyone. The wine facts too were interesting and informative, again because they were impersonal facts rather than intimate details of real peoples’ lives. As for the details of the arguments and issues between Kathryn and Phillipe and Kathryn and her ex-boyfriend, I felt as though they more properly belonged on “Dr. Phil” or “Jerry Springer.” The book felt as though it was written as an attempt by the author at self-therapy; rather than spill out her thoughts and feelings about her life to a professional, it was as if she decided to write about it (or should I say whine about it) in embarrassing detail here to purge herself of her demons.

I hope she feels better now.

Whether you enjoy the drama of shows like Big Brother or Jerry Springer or are just a fan of memoirs, here’s an opportunity for you to get your own copy of Corked!

For more great reads, visit Hachette Book Group or follow Grand Central Publishing or Kathryn Borel on Twitter. You can stay connected with Kathryn Borel on YouTube or become a fan of Corked on Facebook.

23 thoughts on “A Whine Tour through France”