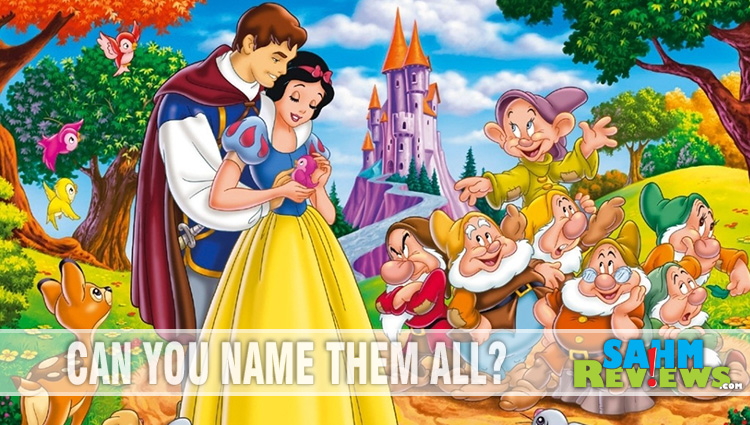 Does someone ever say something to you that makes you go “Huh. Yeah, you’re right. I never thought of that.”?  It’s funny because around here, it’s DH saying something cynical and it makes me think.  While sometimes it is a serious matter, it’s usually just something silly.  Nonetheless, when someone makes you stop your everyday cycle to really step back and absorb something, it’s worth noting.

Well, the other day, DH asked “Why is there a Blu-ray of Snow White and the Seven Dwarfs on the table?”   I explained “One2One Network sent it to me for SAHM Reviews.”  Jokingly, he inquired “You mean in all the years that Snow White has been around, nobody has ever reviewed it?”  No, Dear, this will be the first ever.  Smart Alec.  Pfft. 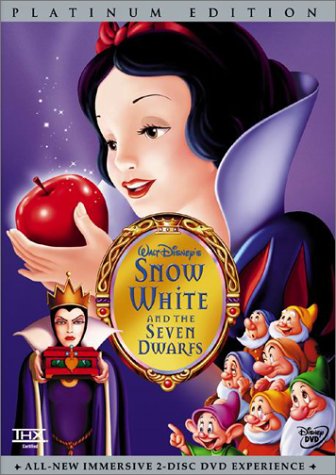 For reference, yes, “Snow White and the Seven Dwarfs” has been reviewed countless times since it was originally released in the late 1930s.  But since we don’t own a Blu-ray player or a Sony PlayStation 3 (that plays Blu-ray), why do we need a Blu-ray Snow White?  Well, for the first time in seven years, Disney released Snow White and the Seven Dwarfs. I have it because I’m participating in the campaign to get the word out about it.  The complimentary copy that I received is the Diamond Edition which includes both the DVD and the Blu-ray in the same box.  While we don’t have the ability to play a Blu-ray, we have a few DVD players, a DVD player built into a small TV, the XBox 360 that plays DVDs and a DVD player in the van.  We could totally make immediate use of the DVD that is included in the Diamond Edition and still be prepared for the technology upgrade should we ever decide to get a Blu-ray player or game console that plays them.

In case you had never realized it, Disney has a Halley’s comet method of releasing classic movies – every once in a long while.  I’m not saying that it’s a bad thing.  Actually, from manufacturing and marketing standpoints, it’s genius.  Classic movies probably aren’t a perpetual high-sale item so short-run, high quantity, occasional releases limit dead-stock on shelves while also giving the marketing crew the ability to work the “limited” angle.  Essentially, what it does is make you decide if you really want the movie or not because like the commercials say “Once it’s gone…” you don’t know when it will be available again.

I remember several years ago (well before I had kids) laughing at my aunt for her collection of Disney movies.  As each new one came out, she would purchase it.  She explained, “I don’t have grandkids now, but I will” and that she wanted to make sure she had the movies when they were ready to watch them.  Until that time, I had never noticed that you couldn’t just walk into a store and purchase any Disney movie of your choice.  I had always thought that “get it before it’s gone” thing was just a marketing pitch.  But sure enough, ever since then, I’ve paid attention and watched movies come and go – usually re-introduced to accommodate the changing technology.  In this case, Blu-Ray.  Seven years ago, it was probably to introduce the movie in DVD format.  So seriously, when a Disney movie comes out that we might want, we consider if we want to buy it because we don’t know when it will be available again!

We sat down and watched the movie last weekend and the girls loved it.  Miss M and Miss K are familiar with Cinderella and several of the other Disney princesses, but despite having various Snow White toys and books, they just didn’t relate to her.  For one of their birthdays, we got a Snow White figure set (Polly Pocket size) that contained a few outfits, four pair of shoes and two dwarfs.  The girls cast the dwarfs aside and welcomed Snow White into their Polly Pocket environment.  Never did I hear them refer to her as Snow White.  They just really didn’t understand because they had not seen the movie and even though I’ve read the book to them, they just didn’t gravitate to the characters.  We also own a Disney princess joystick video game that hooks up to the television.  I was always surprised that they didn’t like playing the Snow White “Hide and Seek” game.  The day after we watched the movie the girls began to unearth all the various Snow White and the Seven Dwarfs paraphernalia that they had.  The sad part is that it has made me realize that just reading the stories in a children’s book isn’t enough to really bring the characters to life.  I’m wondering what other stories I read and movies I saw as a child my daughters haven’t had the opportunity to fall in love with yet!

Now about the movie itself… it’s Snow White and the Seven Dwarfs for Pete’s sake.  I’m certain that you don’t really need me to review it.  But the Diamond Edition DVD/Blu-ray combo pack does contain an exclusive look at the opening sequence of Walt Disney Pictures “The Princess and the Frog.”   It also contains some family games as well as various backstage and bonus footage.  It’s Snow White… it’s a classic… it’s worth introducing your kids to.

… and all along, my aunt was right to purchase those videos before she needed them.

One comment on “Finding Life in Previously Cast-Aside Toys”