When we lived in LA, we had the opportunity to try foods from a lot of different cultures. I enjoyed that and often would pick something completely different than my norm. Almost every time that I ventured outside my comfort zone, I would ask the waitress “Is it any good?” DH would laugh at me and say something to the effect of “Like she’s going to tell you it’s bad.” Fortunately, waitresses are honest people and sometimes they do recommend that you pick something else from the menu.Every once in a while, I’ll run into a waitress that says “Well, I don’t like salmon (or whatever) so I haven’t tried that dish.” A few times I’ve heard “I really like salmon (or whatever) but this one just didn’t work for me.”

Never have I heard “I tried salmon (or whatever) a few times and it’s been my experience that they are always bad.” I’m certain that I’m not the only person who would find that completely unbelievable and not very credible.

Recently I was in the electronics section of a mass-merchandiser and overheard the associate ‘helping’ a customer pick out a game. I had to bite my tongue when he said “Don’t buy any game that is based on a movie. It’s my experience that they are all bad.” That is some stinking poor advice. Dude, when was the last time you played a game that was based on a movie? Was it back when the games were written by gamers and the marketing people finagled a deal to brand it? We are way past those days. Games now are more integrated with the movie in more ways than just the title. 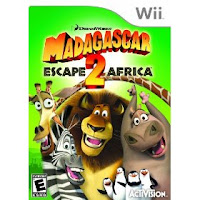 Madagascar 2: Escape 2 Africa was co-created by the people who made the movie, DreamWorks Animation, and people who know gaming, Activision. As a result, the storyline from the movie carries into the game where players are taken on an adventure to save the African savannah. Throughout the game, cut scenes tie different aspects of the game together. The cut scenes are short cartoons featuring characters like King Jullian and the goofy penguins and, aside from just being filler, are actually fun to watch.

Madagascar 2: Escape 2 Africa is basically a single person game with head-to-head (tournament style) mini-games as an option. The box states that it is for up to 4 players but that is strictly for the mini-games. If you (or your child) are playing alone, the main game is great but if more than one person wants to play then load up the multiplayer tournament mode (mini-games).

The primary adventure is cute and rotates between the different characters from the movie. For example, Gloria races in the water but Marty races on land. The cut scenes (complaint – the audio is about 300 ms out of sync from the video) tie the stories together to explain the switch between characters after different tasks are completed. 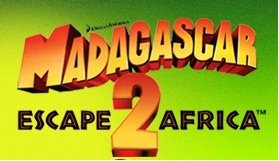 It’s not a simple game that you can just rush through. Getting a handle on controlling it took a little time. Miss M had some difficulties steering during the race, but she did awesome on precision games. There is a part of the game where Marty kicks balls at balloons in the air and she was able to target and adjust the power very well. A few of the races took her several attempts to get past – but that’s okay because if it were easier she would finish it in a flash.

Madagascar 2: Escape 2 Africa has a good variety of mini-games to choose from – including simple ones for younger kids such as Musical Chairs and Hot Durian (hot potato) as well as some more intricate ones like the diving event. I played Musical Chairs with the girls and we giggled the whole time. I would slow my character down and make the lion behind me bump into me and the girls would laugh. Simple idea but still fun.If you haven’t gone to see the movie yet then add it to your “To Do” list. It’s an animated movie, but it’s not just for kids. It’s hilarious for the whole family. If you’re looking for a fun family game for the PS2, PS3, Wii, XBox 360, DS or even the PC, Madagascar 2: Escape 2 Africa is a great choice.

On a side note, the game has a storyline that promotes eco-friendly behavior. For tips, information and activities about protecting endangered animals and plants, visit Conservation International.

1 thought on “Not All Advice is Created Equal”