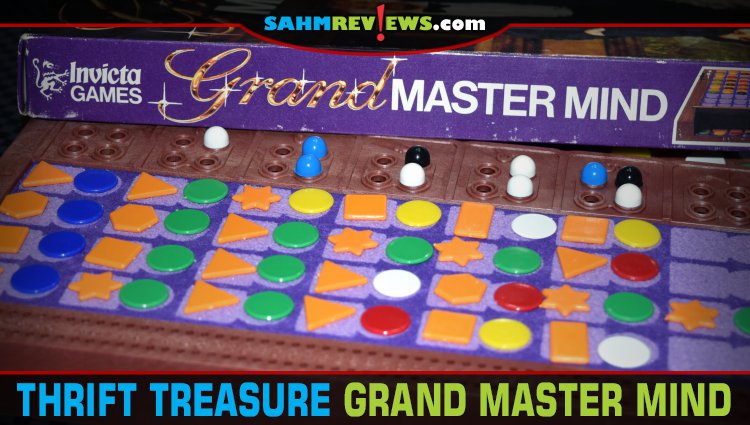 One of my favorite games when I was in middle school was Mastermind. That’s the game where one player creates a sequence of four pegs in any or all of four colors. The other player will then guess by placing four pegs on the track. The codemaker then gives hints as to which are correct, the correct color in the wrong place, or completely incorrect. Using this information, the codebreaker will then continue making educated guesses until they have cracked the code. Roles are switched and the person who completes the puzzle in the fewest guesses is the overall winner.

With the amazing popularity of Wordle, which is nothing more than an app version of 80’s game show, Lingo, it makes sense to show off this copy of Grand Master Mind we found at thrift a few months ago. Advertised as “The most difficult version yet of the world’s greatest game”, if the number of pieces is any clue (over two hundred), they’re not exaggerating.

Instead of creating a four-color sequence, in Grand Master Mind the codemaker will create both a color and shape sequence. These two variables are paired up so that one space might have a red color and a triangle shape. It is the goal of the codebreaker to figure out not only which are paired, but their placement in the sequence.

To do this, there is a third color now added to the clue-giving portion of the game. Black pegs mean both the color and the shape are correct and in the right position. A white peg means the color and shape are paired up correctly, but in the wrong position in the sequence. Lastly, the blue peg means either the shape or color are in the right position but paired up with the wrong partner. Of course, a hole is left empty when neither the color nor shape matches the same position in the hidden code.

Much like the original, Grand Master Mind is played over multiple rounds with each person taking turns at being the codemaker. a scoring track keeps count of how many turns were used and the player with the fewest overall after an agreed number of rounds is the winner!

While new to us, it wasn’t difficult to find several complete copies available on eBay for reasonable prices. I believe we paid $3.88 at thrift and took a chance that all the pieces were present (they were). Paying a little more on eBay for one that has been inventoried shouldn’t be overlooked. If you’re a fan of the original Mastermind, you must give this version a try!

Are you a fan of these puzzle-type games?