During the holiday season it can be more difficult to find unique games at thrift. The lack of selection probably has more to do with the cold weather and the passing of yard sale season rather than more customers buying used games to put under the Christmas tree. Maybe it is a little of both.

We hadn’t been to our Goodwill in two weeks, an eternity for us. Upon arriving we noticed the shelves were abnormally bare. Every couple of months our store goes through their entire inventory and purges anything that has been sitting around for a while. Much of it ends up in the dumpster and some sold off for pennies to recyclers and wholesalers. The game section only had a couple dozen titles and most were of the Trivial Pursuit or Scene It types. One did stick out to us – a never-played copy of Ravensburger‘s Sphinx! 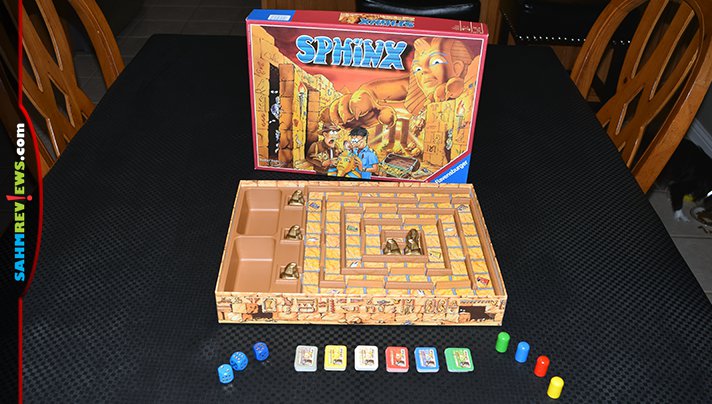 What caught our eye was the molded three-dimensional board that sits inside the box bottom with walls sticking up and parts that create hidden moving passageways. Up to four players will travel through this level of the pyramid to try to get to the center and ultimately the treasure chamber.

This chamber is guarded by three mighty sphinxes. During setup, the six included plastic sphinx pawns are mixed and placed on the board in the designated spots (three outside the treasure chamber and the other three in temple chambers at the edge of the pyramid). Each sphinx has a different color on the bottom and you must remember and match the color in order to gain entrance to the chamber. Matching colored Sphinx cards and three dice are placed next to the board while all players select a playing piece and puts it on the starting space. 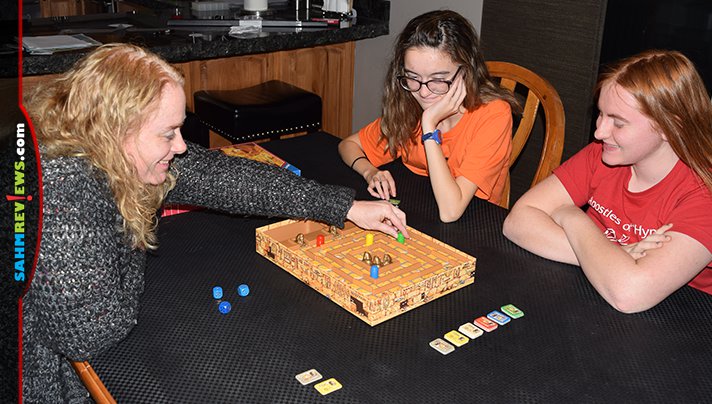 On your turn you will roll all three dice and resolve them in any order, independently. Most results will be a number and you move your pawn forwards or backwards along the path inside the pyramid the number of spaces shown on each die. You may not add up the results of the dice – each die must be resolved on its own as if it was its own action. You may not change directions in the middle of a movement, but can change between dice. 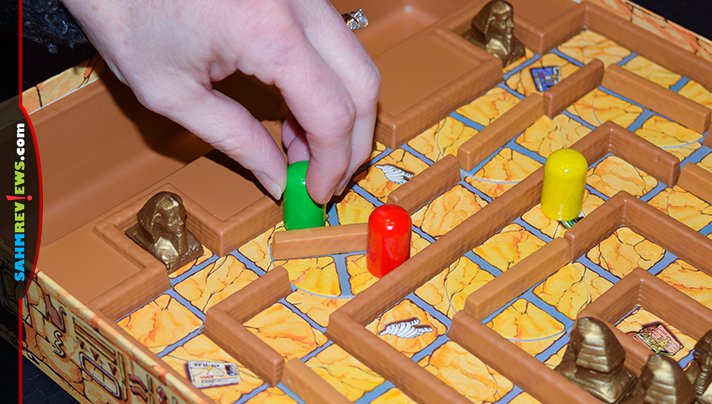 If you roll a result that has two snake symbols on it, you must take two of the Sphinx figures and swap their places without looking at them (one from the treasure chamber and one from a temple chamber). While moving, if your pawn finishes on one of the two squares next to a secret door, push your piece against the wall, causing it to rotate. Your pawn will rotate with the door 180 degrees to the other side. Any other pieces on those same adjacent squares will also rotate to a new position. 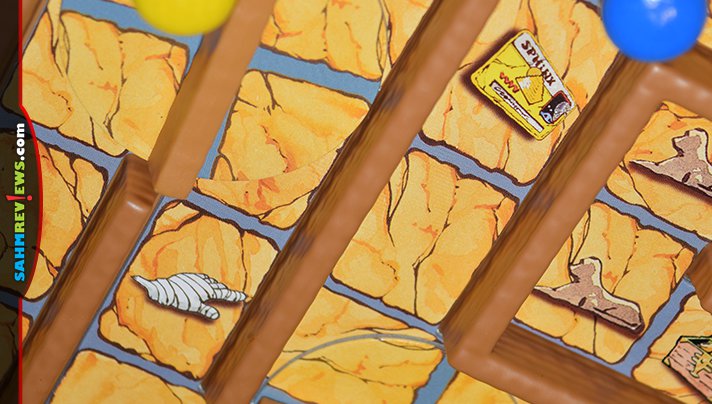 When you land on or pass over a specially-marked Sphinx square, you may take the corresponding colored Sphinx card from the pile next to the board. You may only own one of each color, so if you already have a copy, you must return the new one to the pile. 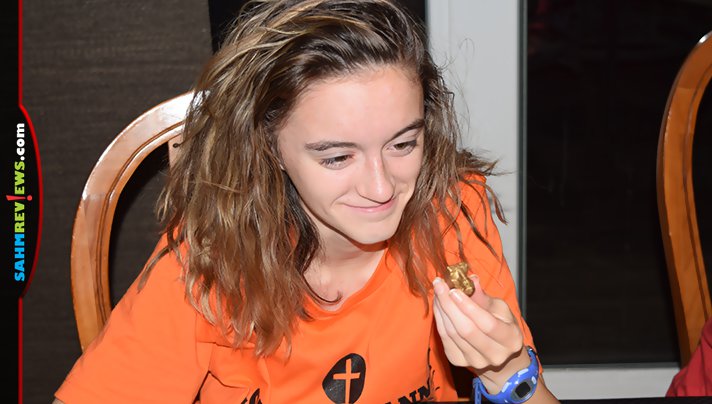 Some of the squares on the board have a mummy’s hand pointing the way. When you move onto or over one of these symbols, you may peek underneath any of the six Sphinx figures to discover its color without sharing it with other players. Each player may only look at a maximum of one Sphinx per turn, even if they crossed over multiple examples of the symbol.

Any time you move over another player, you may steal any one Sphinx card from their collection as long as you don’t already own that color. You can steal from multiple players on a single turn if you pass over more than one pawn, but never twice from the same player. 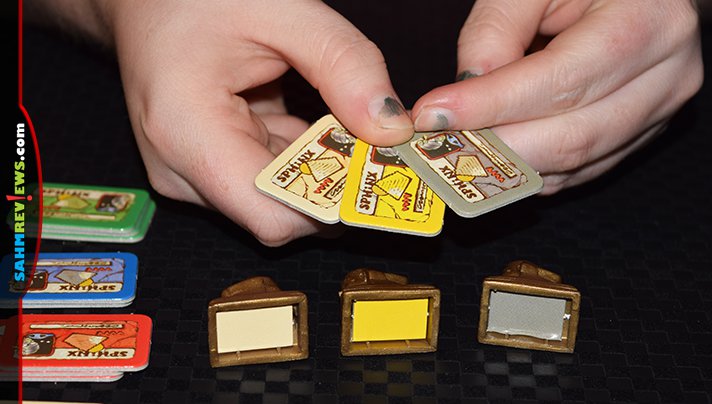 Ultimately you’re trying to discover the colors of the three Sphinxes currently guarding the treasure chamber and their order. When you believe that you know all of the colors and their correct order, make your way towards the treasure chamber. When your roll results in you moving onto or past the first Sphinx, place your pawn on the last square with the treasure and present three of your Sphinx cards to predict the Sphinxes’ colors. Check the bottom of all three without showing other players. If correct, reveal them all and claim victory. If even one color or position is incorrect, you lose all of your Sphinx cards and return to the starting square (OUCH!). The game continues as normal with the next player.

Sphinx is a creative memory game that has elements which remind us of the original Fireball Island. The box advertises the game for ages 8+, but in reality it could be enjoyed by children as young as 4 or 5 as long as an adult is present to explain the rules. While you can find copies on Amazon from 3rd party sellers, your best bet is to pick it up on eBay where prices are quite a bit less.

What is your favorite Egyptian-themed game?