Back when I was in middle school, our family lived in West Germany. Dad was assigned there as part of the QUASAS program supporting our military stationed overseas. From 4th through part of 8th grade I attended an American school but didn’t live on base. Our house was “on the economy”, which simply meant we lived in a regular house with German neighbors.

One of the great benefits of living overseas was the ability to easily visit other countries as easy as we travel to other states here in the U.S. We managed to tour Italy, Spain, West Berlin, France, Holland, Austria, Switzerland and of course West Germany for family vacations and school field trips. When we discovered we would be headed back to America after 4+ years in Europe, our family decided to take one last trip to England. It would be our first time to cross the channel and most of it would be in a tent at a campground just outside of London.

I remember the era very well. Charles and Diana were engaged and the street vendors were stocked with commemorative souvenirs of the upcoming wedding. The weather was always cloudy, but the people were full of sunshine. With the exception of Stonehenge (it had been cordoned off due to vandalism), access to most places was easy and inexpensive. Most included audio tour guides, some of which I actually paid attention to.

I don’t recall exactly where I heard them, but I remember the stories of the famous guilds of London during the medieval era. Comparable to today’s trade unions, these guilds of 600+ years ago were made up of carpenters, butchers, embroiderers, plumbers, skinners, weavers, goldsmiths and more. Any respectable trade had its own guild, crest and hall, and there was also a main guildhall where guilds congregated to discuss the running of the city and how to control commerce. The Chief Spokesman of the guilds became the Mayor of London while other leading delegates became aldermen. 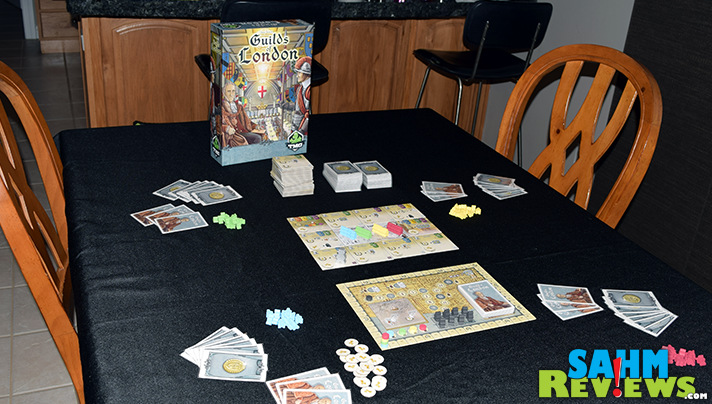 So when I learned of Guilds of London by Tasty Minstrel Games, I knew I would have a soft spot for the theme. Upon reading the introduction in the rule book, a rush of memories came flooding back of our brief vacation there in the very early 80’s. While our photos may appear to show a very complex game, rest assured it isn’t as difficult as it first appears. 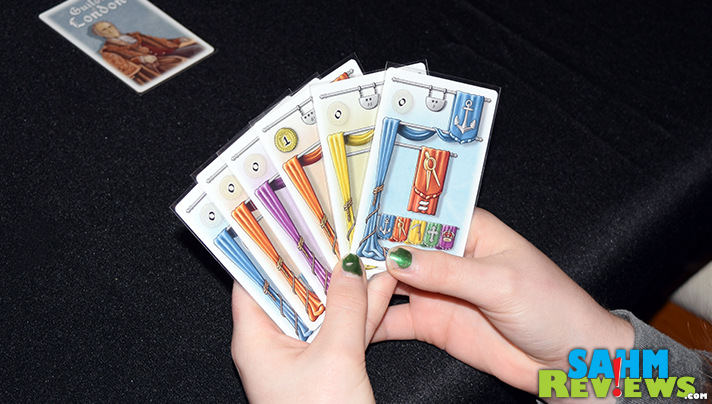 In the Guilds of London board game you are also vying to become the Lord Mayor of London by sending your liverymen (followers) to enroll in different guilds in an effort to take control. Each player begins the game with six cards in their hand, four liverymen in the guild hall, a mayoral card (for end-game scoring) and working from the same randomly-seeded board. 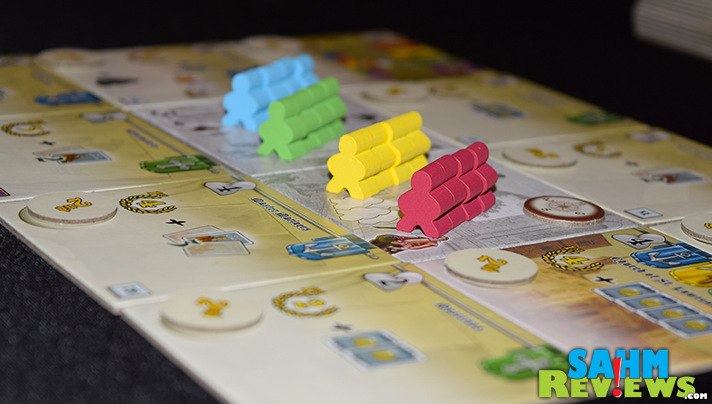 The action cards in your hand represent the number of possible things you can do on your turn. You may play any card to simply hire another liveryman, putting him into the guild hall. Playing any action card also would allow you to move a hired liveryman from the guild hall (or another guild or special building) to any other face-up tile that matches the suite of the card you played.

Or, by paying the fee listed on the top of a card, you can play it to take its special action.  At the end of your turn, you will draw two new cards to your hand. Don’t want to do any of the above? Then just draw four new cards, keeping in mind you have a hand limit of seven. 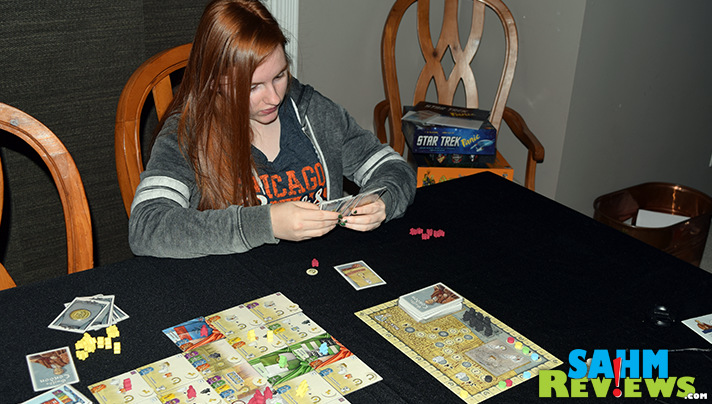 Once everyone has taken their turn for the round, it is time to look at the board and see if any of the tiles’ criteria have been met. In the top left of each tile is a number – this represents the number of guild members needed before the tile can be resolved. The player with the most members in the guild of their color received the 1st place award, with the next player receiving the 2nd place items. The 1st place winner also gets to ‘own’ the guild by turning the tile over and placing one of their liverymen on it. The rest of the pawns from all players are returned to the guild hall. 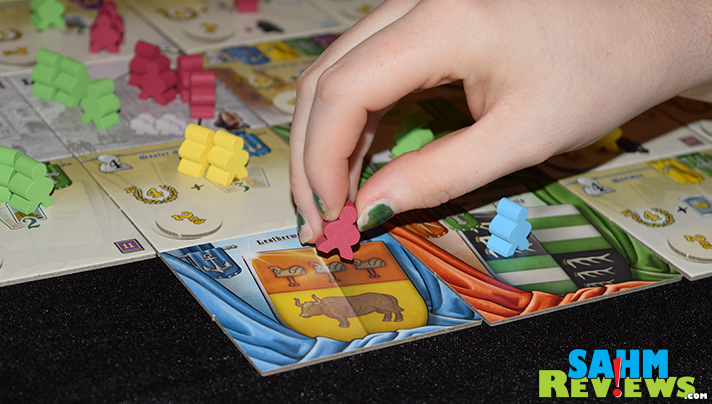 I mentioned earlier that the tiles in Guilds of London are randomly seeded. Paying attention to their position is critical as they are resolved in a specific order, starting from the top left of the playing area, working across, and then beginning on the left of the next line. Some tiles will allow you to do things that might activate a later tile! Keep an eye out for powerful combinations that your opponents don’t see! 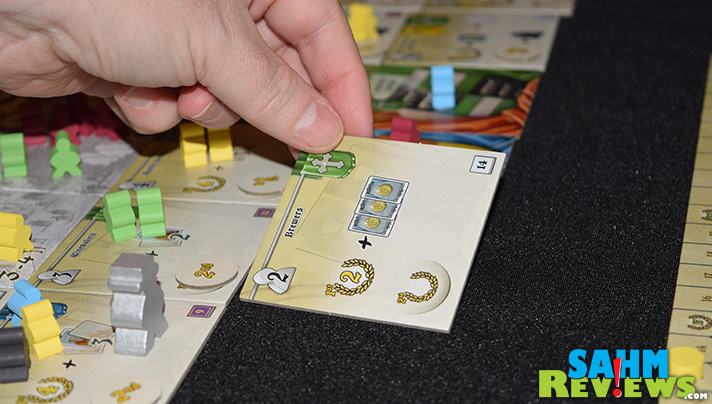 The last thing at the end of every three rounds is to add new tiles, depending on the number of players. This means that the board is constantly changing, and the order of resolving tiles can be affected by the placement of the new tiles. There is also a Plantation Tile set off to the side of the board that acts as a one-round area control bonus. Have the most liverymen of your color on the tile and receive that bonus for the round. Each winner must also return a number of liverymen to the guild hall, so winning once doesn’t guarantee a win in subsequent rounds. 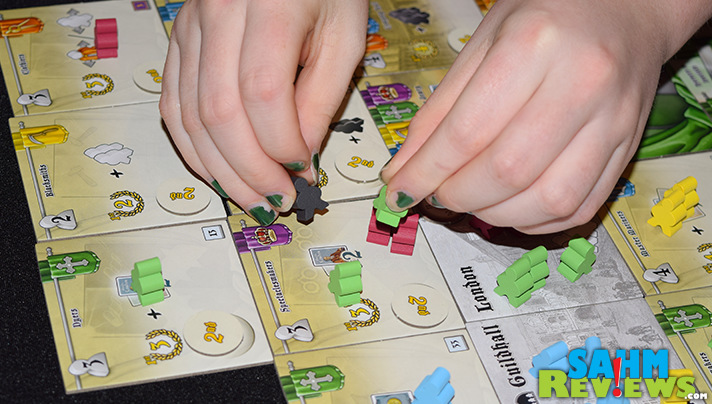 What makes Guilds of London so special are the sheer number of special card actions (and Mayoral rewards) that will make every game very different. There are so many, TMG had to include separate “cheat sheets” to clarify exactly what each card is designed to do! Some might find this inconvenient to have to keep consulting this addendum, but we find it a minor annoyance – one we’re happy to put up with to have a game that is always fresh and never the same!

Compared to a number of other titles with similar components and complexity, Guilds of London is a steal at the current Amazon price of just over $40. 2017 is shaping up to be a banner year for Tasty Minstrel Games, and is currently the first game company to offer ownership shares of the corporation to the general public through the crowdfunding site, MicroVentures! There are some great bonuses in the form of board games just by becoming a partner!

Have you ever visited London? Know much about the history?

10 thoughts on “Guilds of London Board Game Overview”