My daughter took me by surprise the other day and said the strangest thing.

To most people, this doesn’t sound like an odd request because we all know how delicious pumpkin pie can be, especially with the perfect dollop of whipped cream on top. But my daughters haven’t shown a love for pumpkin pie, opting for any other dessert offered as an option, but mostly the chocolate chip pecan pie I make for special occasions. I think last Thanksgiving she must have tried it and realized how good it is.

Either that, or she just likes an excuse to have whipped cream. That’s probably what the selling point was because when you put my parents in charge of whipped cream dollops and you end up with more of that than the pie.

Not that I’m complaining, of course.

I’m not one who regularly bakes so it isn’t like we have a reason to keep whipped cream on hand. As someone with a sweet tooth, I’m always happy to have a reason to need to purchase it! Now instead of waiting for the opportunity to bake to add Reddi-wip to the grocery list, I simply need to say it’s game night.

As you know, we receive a lot of games from pretty much every publisher and enjoy sharing the ones we like with you. There are so many options to incorporate into those game nights and we believe that if we tell you about a variety of them, you’ll find one that resonates with your family. This post was sponsored by Hasbro as part of an Influencer Activation for Influence Central and as with every other post, the opinions are my own.

You may have followed along last year as people went crazy for Hasbro’s Pie Face game. From regular families to celebrities, it was all over the place. People were rolling the dice, taking turns putting their head inside the target and gambling on whether they would be the victim. Seeing the success of the game, Hasbro has released a follow-up version of the game that takes the variability of chance out of the game and inserts an element of skill. Unlike the original where you rolled a dice that would determine the number of clicks you had to endure, Pie Face Showdown is simply a battle of speed. 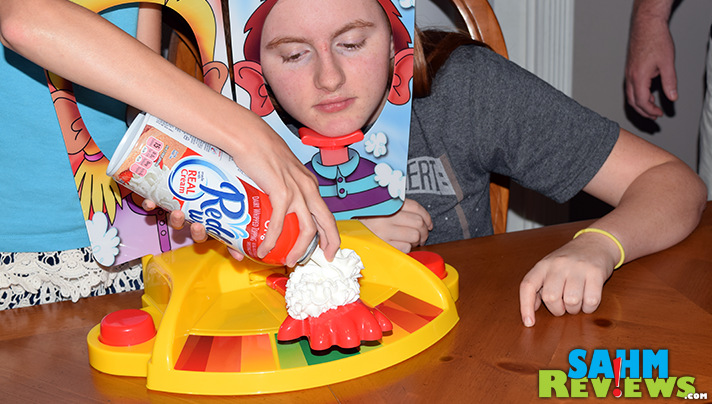 Setup is simple. Assemble the pieces, add whipped cream to the throwing arm and go. Two people place their heads in the designated target areas then when someone gives the indication to start, they smack their buzzer to move the throwing arm the other direction. Once it reaches the red area indicated on the dial, it will launch and one of the two participants will get “Pie Faced”. Reset and it’s ready to go again! It’s probably easier to grasp the impact of this if you watch it in action!

My daughters were anxious to reset the game and play again multiple times and we could see this would be perfect for larger gatherings. As each child finishes, the game is easily reset and the next two participants can start their showdown right away. 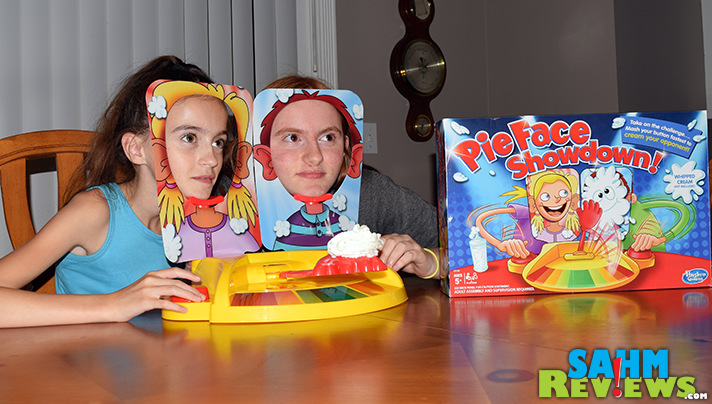 Pie Face Showdown will be available online October 1st on Hasbro Toy Shop, but you should be able to find it on shelves at most retailers such as Target and Walmart at an affordable price point of $25. Let me rephrase that: You’ll find a shelf with the label, but I won’t guarantee it will be available. This fast paced and hilarious game will likely be a hot holiday item so who knows how hard it will be to find once kids start turning their wish lists over to their parents! A little peace of mind about purchasing it early: The whipped cream isn’t included so there’s no fear of anything spoiling before the package is opened during holiday gift exchanges. 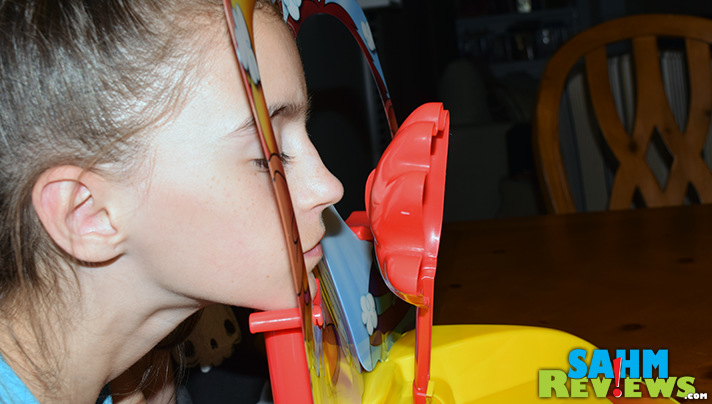 To put your mind at ease about the questions you’re probably asking yourself, the hand with the whipped cream doesn’t hit the participant’s face. There is a built-in gap leaving just enough room for the fluffy pile of sugary goodness. In addition, if you run out of whipped cream or have an allergy in the family, the game includes a sponge that you wet down and attach to the throwing arm. Oh, and for those of you who put cheese on your pie, you could probably attempt this with canned cheese products, but I don’t know that it would be lightweight enough. We discovered that the thrower flipped best when the cream was added to the fingertips instead of to the palm. 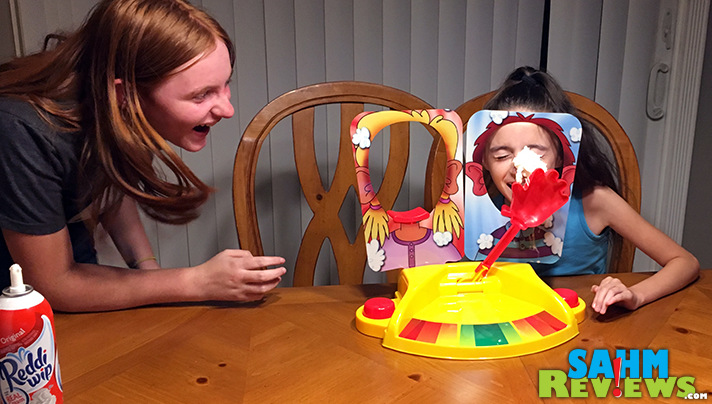 Whether you win the showdown and get bragging rights, lose the showdown and get a face full of whipped cream or are spectating the challenge, everyone is a winner. And when that palm comes flying toward your face, you’ll probably be torn between knowing you lost and winning a face full of whipped cream. Mark your calendar for October 1st to check it out on the Hasbro Toy shop, keep an eye out for it at your local retailer or grab a copy from Amazon. Find out what other fun is in store by visiting Hasbro Gaming on Facebook, the Hasbro News Twitter page or checking out their Instagram stream.

Will you buy extra whipped cream?

17 thoughts on “Losing Cannot Get Much Sweeter”