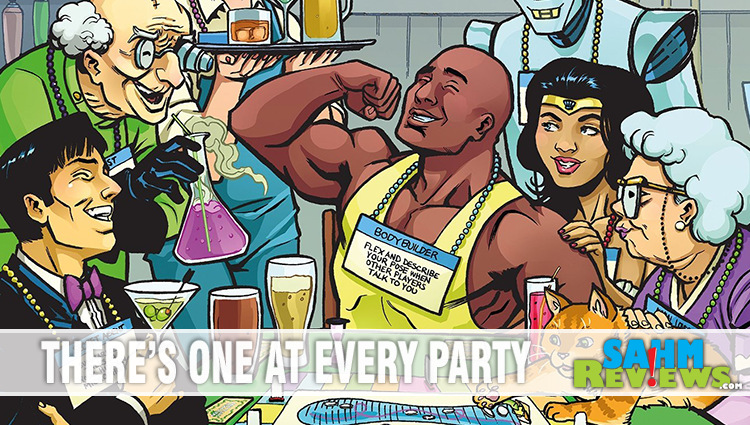 A Couple Game Ideas for When the Kids Aren’t Around

Don’t let the title fool you, we love our children. Playing games as a family will hopefully turn into lifelong memories for both of them. But to be honest, there are times we also enjoy games that have more adult content. NO…this isn’t about some Kama Sutra card game or even Cards Against Humanity (yuck). I’m talking about games that bring up topics, situations or feature graphic or suggestive art that I’m not ready to have a discussion with my girls about.

I’m sure you’ll agree, life is more than Chutes & Ladders, Monopoly and yes, even the Game of Life. We recently discovered a brand new publisher, Party People Games, whose first couple of issues fit that void in our game night with adult-themed (but not raunchy) titles. Let’s take a look at what they’ve created – they might just be a perfect fit for your game group also!

Billed as “The Party Game for Party People”, Double Vision is a role-playing/strategy/trivia game rolled into one. The first thing we noticed: the sheer amount of goodies you’ll find in the box. Not only are there the typical cards and dice, but you’ll also find bead necklaces, beautiful pink dice, a pink velvet drawstring bag and plastic card holders! 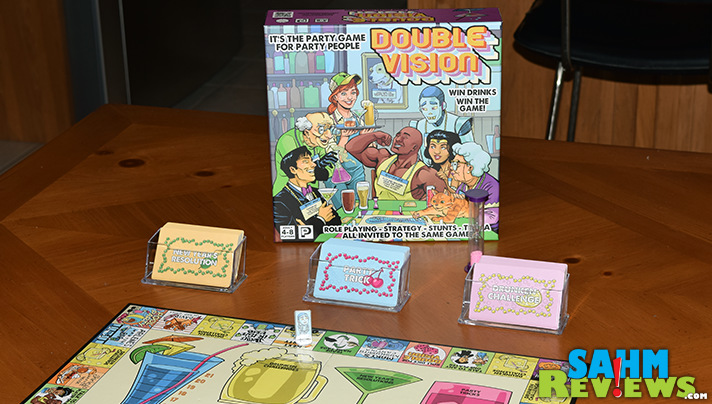 Each player gets a set of beads and attaches one of the included name tags. This sets the character the player must emulate the entire time he or she is wearing it. You also receive a ‘bubble’ token that is placed in the bottom of the scoring ‘drink’. Your goal is to get that bubble up to the 12 drink level (or 21 for a longer game) before any of the other party-goers do. 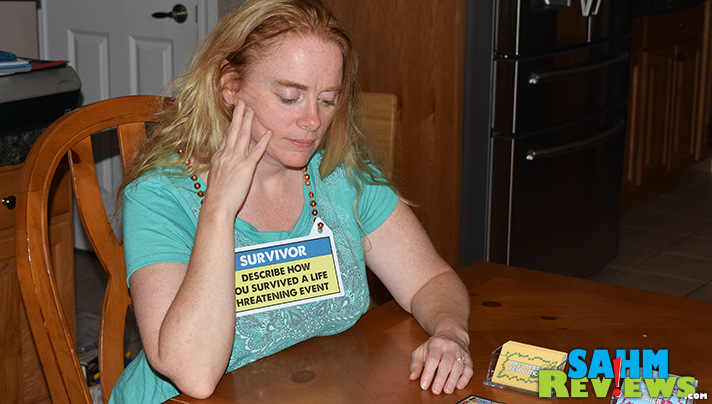 At its heart, Double Vision is a roll-and-move game. Rolling the two included dice allows you to move your pawn around the board, executing whatever action is on the landing square. Many will instruct you to talk to another player, but remember that you have to stay in character. Landing on a bar wins you a drink (move your bubble up one space), while visiting a restaurant sobers you up and moves your drink level down by one. 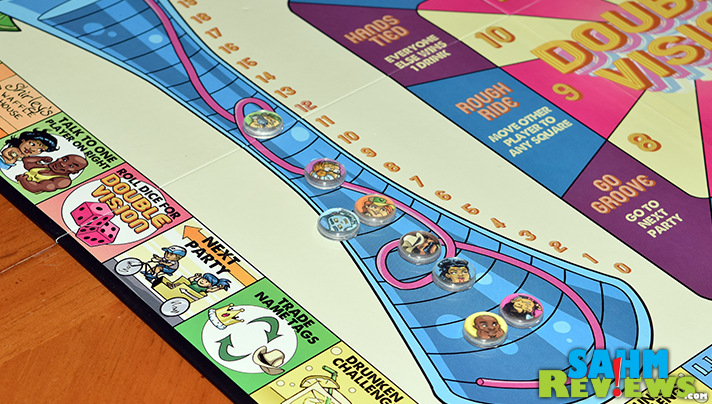 If you are fortunate (or unfortunate) enough to land on a “Party Trick” space, draw a card and start the included timer. If you are able to successfully perform the trick before the timer runs out, you win another drink! If other players land on the same square, you can force them to attempt the same trick or draw a new one! 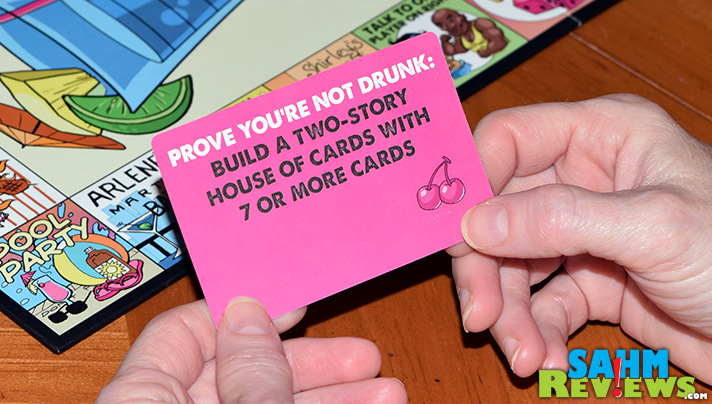 “New Year’s Resolutions” and “Drunken Challenges” are two more actions that require you to draw a card and attempt to complete their requirements successfully. Some cards require feats of dexterity (build a card house), while others require you to name X amount of things which answer the question.

Double Vision isn’t a game that requires deep thought, mathematical skill or quick reflexes – it is a social game whose value lies in the fun it can bring to your next party. Available for $50 shipped on Amazon!

Party People Games also has a line of card games under the Double Play moniker, each with their own set of custom rules. But what makes this series so interesting is that not only are they stand-alone games in their own right, they also double as expansions for the original Double Vision game! 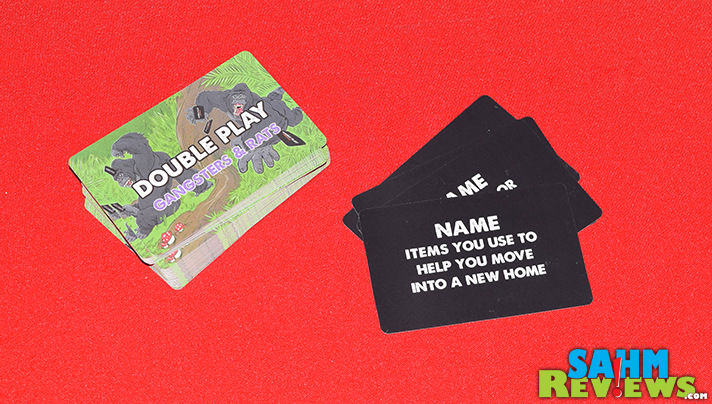 In Gangsters & Rats, the active player becomes the “rat” and draws the top card of the deck. He/she then calls out as many answers as they can before the timer expires. Next, all the other players (“gangsters”) continue to give unique answers, trying to accumulate more than the rat did. If successful, the rat is shot. If the rat was able to name more, they get to keep the card as “body armor” or discard it and shoot one gangster. Play continues with everyone taking turns being the rat, and the last person living wins. 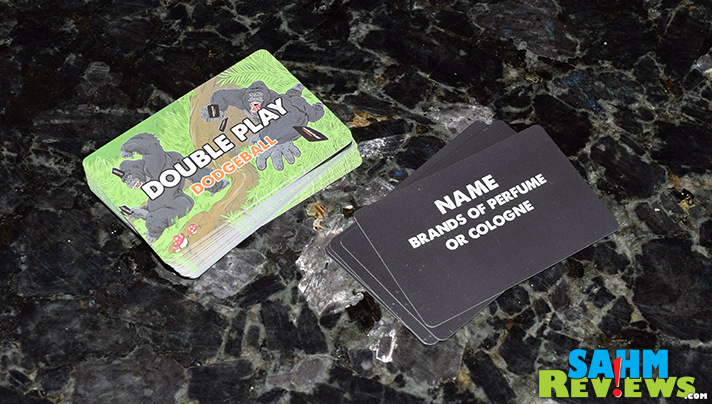 In a similar fashion, Dodgeball uses a similar deck and a player will call out 1, 2 or 3, denoting how many answers are required. At the same time all players start calling out unique answers and must have the correct number before the timer runs out. If you fail to do so, you are considered “out”. Keep playing rounds until there is only one player left!

Continuing with the gangster theme, Cement Shoes again uses the same black-with-white text that you must give answers to. The starting player reads the subject aloud and must name three unique answers before the 30-second timer expires. Then in player order, everyone else must continue to name three additional unique answers before their timer is up. If you fail, you receive a cement shoe. Receive two and you’re out of the game.

As I previously mentioned, with the Double Play Series you really get twice your money’s worth since they can all be used as card expansions in Double Vision. When you land on a Drunken Challenge, another player draws a Double Play card, reads it aloud and starts the timer. If you give as many answers as the sum of your previous roll before time runs out, you win one drink!

You’ll find the various Double Play card games on Amazon for $20 shipped, or purchase directly from Party People Games on their website. Be sure to keep a sober eye on their Facebook and Twitter timelines for upcoming new product announcements and specials!