It Takes a Village…

Just two weeks ago I introduced you to R&R Games and their wonderful (and inexpensive) family card game, Igor. Usually we try to continually bring you different companies each week so we can all discover just how many great people are making games that are so much better than what you’ll find at your local Walmart. But I decided to show you another one from R&R, only because it has become such a hit among our family and friends.

Set in China during the Qin Dynasty (more than 2000 years ago), Qin is a tactical game that requires you to build and capture as much of the board while preventing your opponents from doing the same. Designed by one of today’s best-known game creators, Reiner Knizia, it is one of the first games we’ve played where you can purchase the physical game OR spring for an iPad app and play it virtually!

Qin includes a double-sided board to give you some variation from game-to-game. Each player draws colored domino-like tiles and plays them by matching up to a previously-played tile with the same color. Your goal is to build pagodas in your provinces. 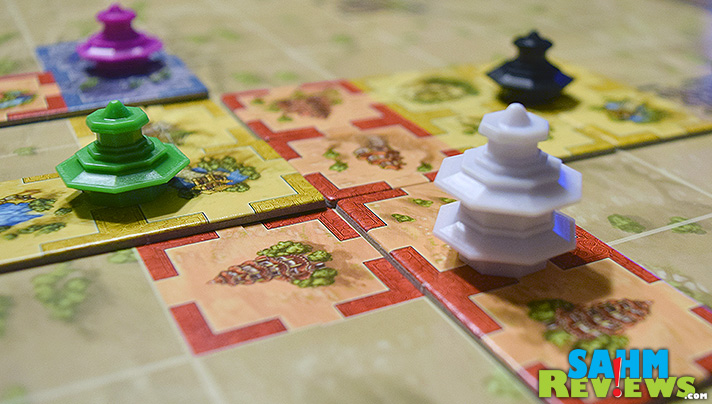 When you place a tile that creates an area of two or more matching colors, you capture that area and place one pagoda on it. Expand that area to five squares and you now ‘king’ your pagoda and build it twice as high. Why is this important? A single pagoda can be overtaken, a double cannot. These are called “major provinces”.

As you build out your area, you have to watch for encroaching opponents who may wish to try to overtake your province. If your small province (only one pagoda) is encroached by another player working on the same color, when those colors are connected, the player with the largest province (in squares) takes over the smaller province. Thus the importance of turning yours into a major province – these cannot be captured. 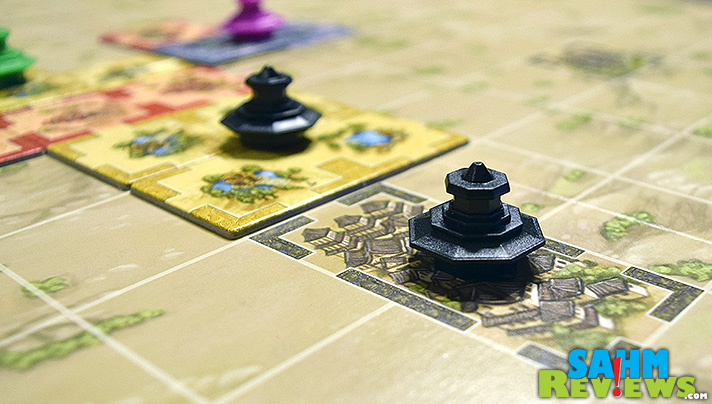 On various area of the board there are also pre-marked villages that become loyal to whomever has the largest army around them. These are awarded to the first person to build a province next to it, but they can then be overtaken by another army later if they are able to connect provinces to it that have more total pagodas on them. This could be a major province, or more than one province of different colors. Villagers’ loyalties are only to whomever has the most pagodas. 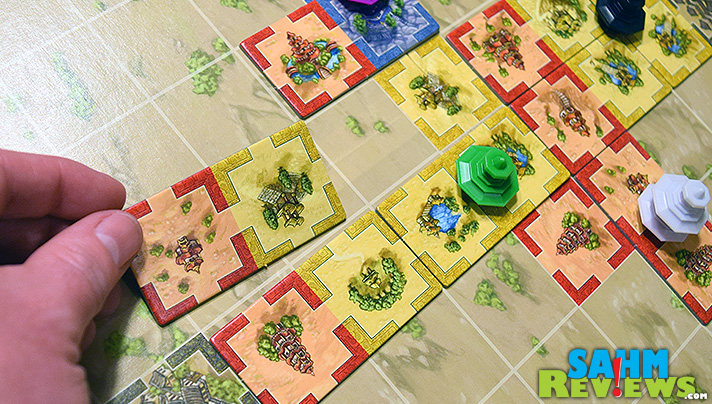 Strategy comes into play almost every turn. You’re trying to maximize your provinces while creating areas where your opponent cannot legally build. In the example above, green is playing a yellow/red tile next to another yellow/red tile. This not only creates a new red province for them by connecting two red tiles, it expands their yellow province to five squares, turning it into a major province. As a bonus, the newly-created red province is adjacent to a neutral village, who will now be loyal to green. 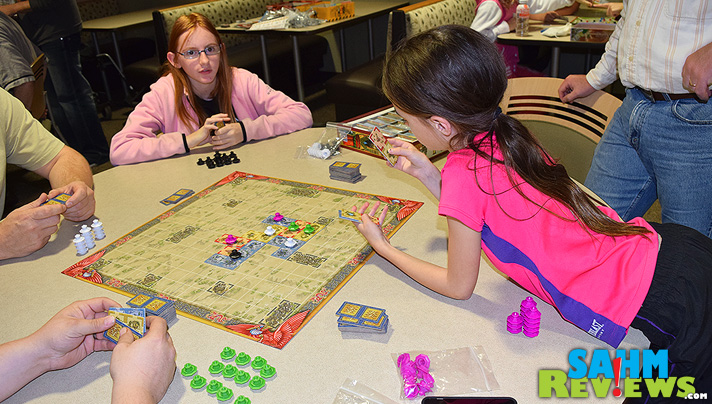 “Will you be bringing it again?” “I can see myself playing this too many times!” Those are some of the comments we heard when we first brought it to a weekly board game night held at a local college. They could quickly see the depth of the strategy and were anxious to learn the correct tactics needed to be successful. 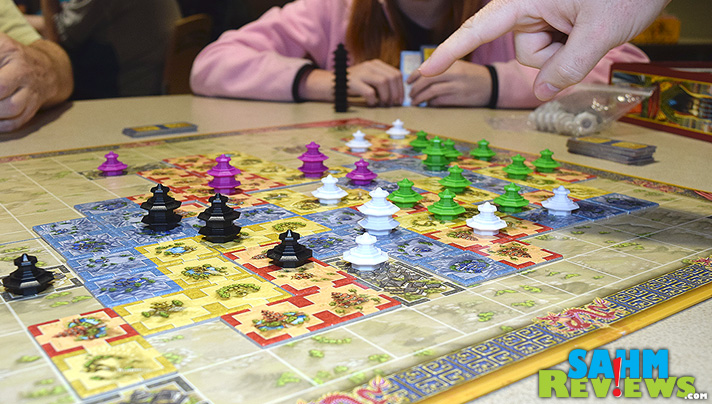 A couple weeks later we again brought it with us and introduced it to another group of players. Qin was met with the same level of interest thanks to its easy-to-learn-but-hard-to-master game play. In fact, one commented at the end of the night that she wanted to pick up a copy to give as a Christmas gift to a friend to introduce her to a board game that wasn’t Monopoly!

I have to agree with my friends in the board game group. This is easily a game that could consume you if you wanted to master the strategies. And fortunately is easy enough to learn and is so colorfully designed that it would appeal to kids as young as 6. Rated for 2-4 players, we found it most fun with three or four. Expect your first game to last much longer than the estimated 20-30 minutes as people get acquainted with the rules, but subsequent games should easily fall into that range.

Pick up a copy on Amazon for under $35 or try it out on your iPad via iTunes. Please take a moment and check out the new releases from R&R Games for 2014. We’ll be bringing you a couple of them in the next few weeks, but if there are any you’d like to see previews on SahmReviews, be sure to tell them!