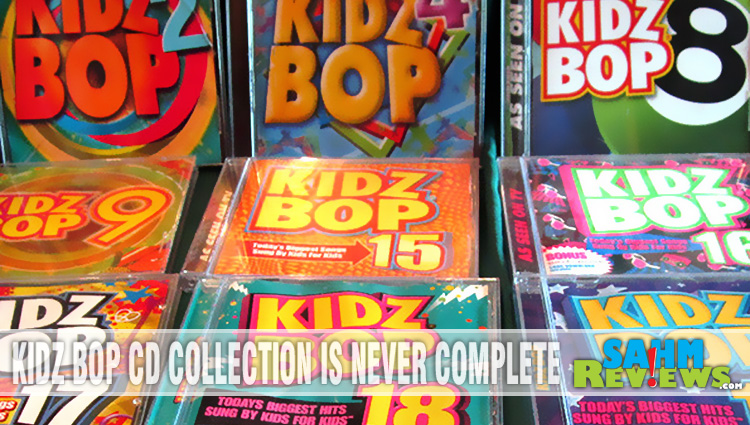 About a year ago, we finally upgraded our van. As much as I hated the idea of a car payment, the idea of being broken down on the side of the road bothered me even more. We checked out both vans and SUVs and decided on the Honda Odyssey. It’s filled with all kinds of gadgety doohickeys that our prior Nissan Quest didn’t have. Mostly because a lot of the technology wasn’t even available when we bought the Nissan.

There was one feature I didn’t know I would love so much: SiriusXM Satellite radio. I can listen to stand-up comedy, Fox News or CNBC stock market news while out and about. When we take road trips, I don’t have to worry about fiddling with the radio searching for something besides static in the middle of the night in the middle of nowhere.

As a bonus, the kids have music when they want it. Music they like. Before our Christmas road trip, we printed out a new channel listing. We were thrilled to see KIDZ BOP has a dedicated channel. It can be a little unsettling when you realize that traditional pop channels allow words that young children shouldn’t be saying. With KIDZ BOP, we don’t have to worry about that.

As we’ve mentioned in the past, we’re big fans of the KIDZ BOP brand. Not only does it clean up trendy songs but it also has given kids opportunities to go beyond singing in the shower. They have their own KIDZ BOP talent search program! They’re also working with Universal Studios on the “Despicable Me: Minion Mayhem” ride. As part of the promotion, they’re running a “Minion Mayhem Super Contest.” The winner and the winner’s family will win a trip to Universal Studios Hollywood for the grand opening of the new ride. The contest runs through January 27, 2014 so head over there and enter.

Of course, don’t forget to check out the latest release in the series: KIDZ BOP 25. Featuring songs like Roar, Wrecking Ball, Royals and Applause, it’s sure to be a hit with the kids in your family. Whenever a new KIDZ BOP comes out, our girls make sure to tell us all about it (over and over and over again) until they have it! If your kids are the same way, KIDZ BOP 25 is available from our affiliate, Amazon for a very affordable price.

Oh yeah, we also tried out the new KIDZ BOP Tooth Tunes, too. While my daughter thought it was really cool to hear music while she brushed her teeth, she said it wasn’t loud enough. As a parent, I love the idea of the timer and if a quiet dose of music in the background helps a child brush for two straight minutes, then I’m all for it! Sometimes, it takes tools like that to establish the good habits and at a price of less than $15, it’s well worth it.

For more information on KIDZ BOP, their latest products, promotions and contests, visit their website.

12 comments on «From Road Trip to Teeth: KIDZ BOP»