When I was a kid, the extent of my concern for recycling revolved around a pop bottle. It was a time when most pop came in glass bottles that you bought by the case. At the checkout counter, there was a deposit required of 10 cents per bottle.

I remember being at baseball games and making enough money to buy myself whatever concession food and treats that I wanted. I started by going under the bleachers and grabbing bottles that had fallen during prior games. Then I spent the game walking through the stands offering to return bottles for people. Most gladly gave up the dime they could have received. I don’t know if they found my initiative refreshing or whether they were just too lazy to stand in line at the concession stand for only a dime. Whatever the reason, I didn’t see it so much as recycling as a source of income.

Today, we’re in an age of more enlightenment about recycling. Not only adults but kids, too. My kids always argue about who gets to break down the cereal and pop tart boxes when they are empty. It’s not uncommon to hear one of my kids say “I’ll go put it in the recycle bin.”

They also know what littering is and that it is NOT okay. We’ll be out and about and they’ll point at something on the ground and say “Someone littered. That’s not good.”

But how do I go about explaining to kids that it’s okay to plant a pen in the backyard? That it isn’t littering.  I simply said “This company found a better way to recycle our pens instead of throwing them in the garbage.” 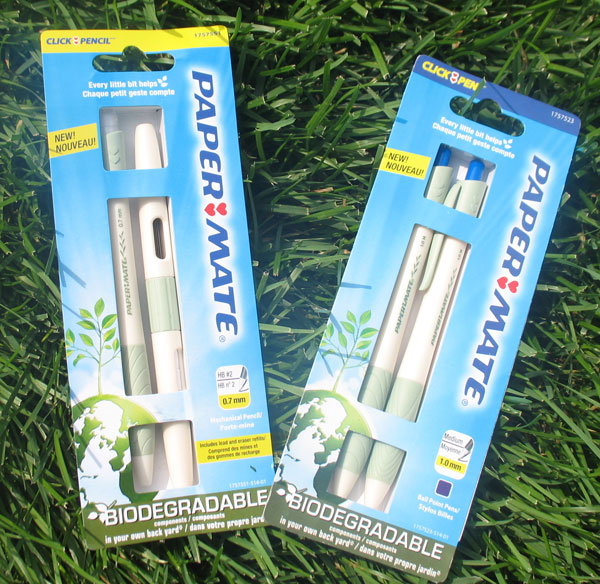 I recently received two packages of Paper Mate products – biodegradable pens and pencils.  The focus of the tour is to showcase how these writing utensils can be kept out of the landfill.  Most (not all) of the components are made from corn-based materials and biodegrade in the soil in about a year.  The project was to plant the components and mark them then follow their progress through the year. 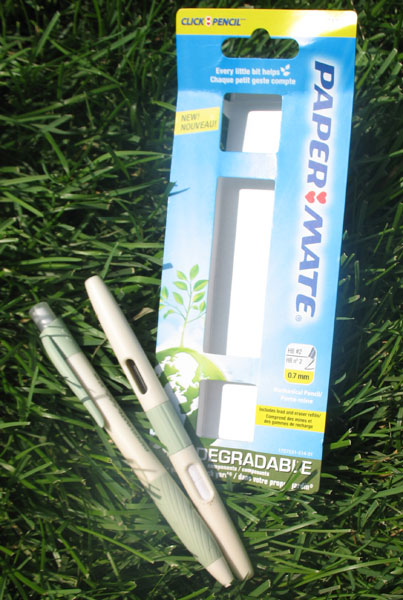 This is the first year that the girls had their own flower bed – created in the open area underneath their swing set.  I had every intention of planting the pen until I realized that I wasn’t going to write enough before the end of the campaign to finish the ink.  Maybe I’m wrong, but it sure seems to counter their intentions if I’m being wasteful, pitching the non-biodegradable items in the garbage and planting the other parts…  simply for the purpose of providing a review.  Instead, I’m going to focus on what’s great about this product… then when it is gone, the girls and I will plant and monitor it.  Minimizing waste both from beginning to end.

But how do I go about explaining to kids that it’s okay to plant a pen in the backyard? That it isn’t littering.  I simply said “This company found a better way to recycle our pens instead of throwing them in the garbage.” 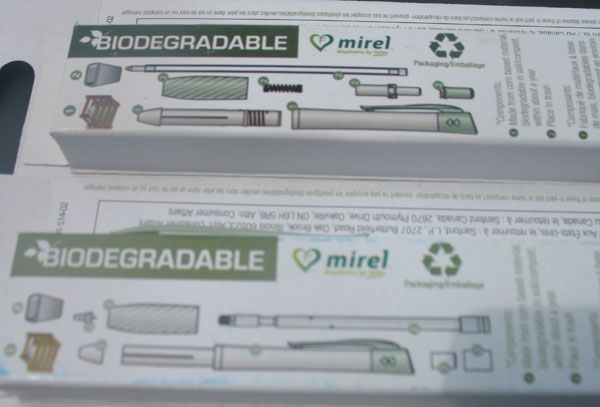 Not all parts of these pens and pencils are biodegradable though.  To make things easy, the package contains instructions on what to dispose of in the garbage and what to plant in the ground.  Hopefully, Paper Mate will have that information available on their website because I’m guessing that I’m not the only person that doesn’t want to keep a box around until the pen is used up just to have a set of disposal instructions.

Honestly, I kind of thought “If it’s designed to be biodegradable then it probably isn’t as good as its counterparts.”  I pulled out the pen and used it and was pleasantly surprised with how smooth it wrote.  And the case around it… one of the components that is biodegradable that I suspected would be terribly uncomfortable… is quite the opposite. The grip is not so squishy that you have to tense your fingers to hold it but it’s also not so hard that it gives you a callas.  It truly is a comfortable pen to hold. 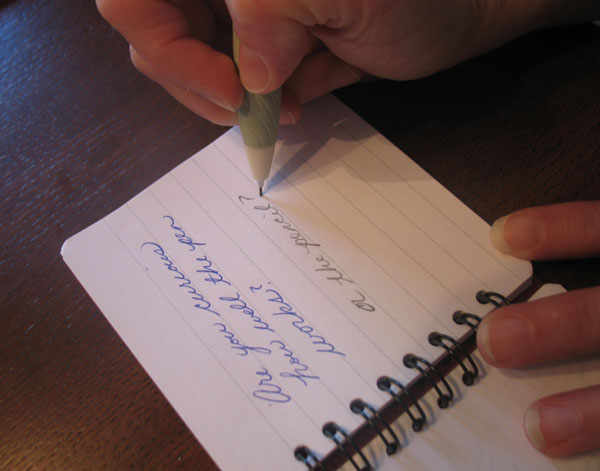 As for the pencil: As an accountant, I can say that I’ve used my fair share of pencils in the past and the biodegradable pencil from Paper Mate was comfortable and slid well.  The lead didn’t stick and break like some mechanical pencils do.  At the same time, the case around it wasn’t rigid like many mechanical pencils.  Despite the fact that many of the components are biodegradable, Paper Mate still chose to offer lead and eraser refills.  Guess what.  The refills come in a case of their own that is… you guessed it… biodegradable when the refills are all used up.

If these were lousy writing utensils, I might have a different attitude. However, they’re really nice. So in the interest of being environmentally correct, I’ll use these and when we’re no longer able to use them, the kids and I will go bury them in the backyard.

…Wonder if I can convince the kids that I’m trying to grow my own pens and pencils.