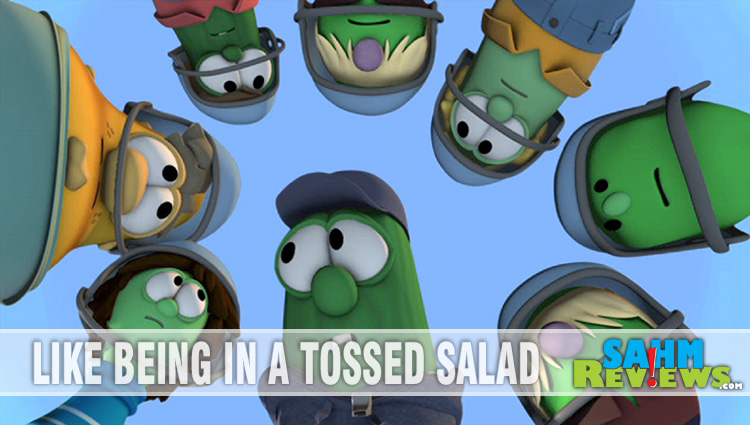 My youngest child is four and has learned to lie. It drives me bonkers! Usually his lies are about things that aren’t really that important. He has an issue with getting into my things. He climbs up shelves in the closet and pantry and just helps himself. When I confront him about “Did you get into the candy?” he’ll lie and say, “No.” I know it’s a lie because I have a handful of wrappers. I tell him, “one day your nose will grow just like Pinocchio!”He also marches to his own drummer and tends to do what he wants, rather than what I ask of him. He knows the rules, he just doesn’t feel he needs to follow them. 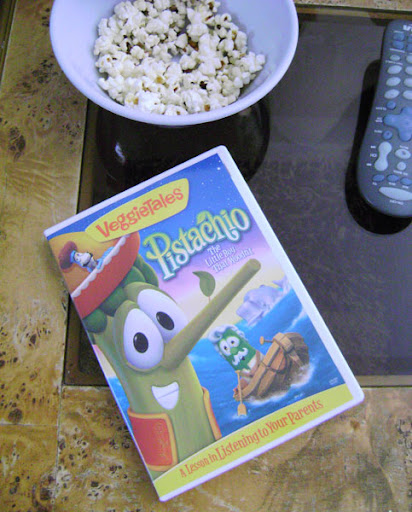 I’m always seeking ways to get the point across that “telling the truth is always the best way to go” and that “following the rules makes everyone happier”. When I was given the opportunity to review Veggie Tales’ Pistachio: The Little Boy Who Woodn’t” I was delighted.

We love to watch movies together, the kiddos and I. Today was just such a day. There was no school. Mother Nature brought wet, cold snow. It was the perfect day to just be with my children. Most of the time, my husband and I watch the movie before the children are allowed to view it–just to be sure it meets the values of our home.

Today we sat down to watch Veggie Tales’ Pistachio: The Little Boy that Woodn’t. I am familiar with Veggie Tales–I have three SUPER fans so, without previewing it with my husband, the kiddos and I just pushed it in the DVD and hit “play”. I appreciate Big Idea Entertainment creating wholesome DVDs and Pistachio: The Little Boy that Woodn’t exceeded my expectations.

Like other Veggie Tales, Pistachio is the same story line as the 1883 story of Pinocchio by Carlo Collodi. I was immediately captivated by this movie with the fun opening song–which has been updated but still holds true to the same sequence– and the familiar faces of Bob the Tomato and Larry the Cucumber! 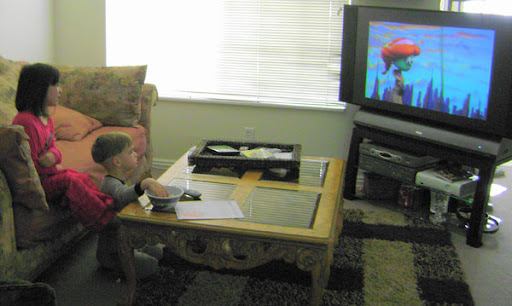 My children were laughing right away and were excited to see Qwerty the Computer. He is more modern in this video and my children “ah-ed” and “oh-ed” at the “letter from a child” being a video instead of a letter being read.

I had to smile at the “spin” of “Extreme Home Make-over” with a great duplicate of Ty Pennington appearing after a “Counter-Top Make-Over”!

Veggie Tales take the story of Pinocchio and creates a wonderful storyline complete with a lonely toy maker, his “caterpillar” assistant, three ducks and a toy made from pistachio wood. The toy, aptly named, “Pistachio” encounters temptations, breaks the rules and lies–just like Collodi’s Pinocchio.

My six year old was laughing hysterically at the town in which Gelato lived, “Bologna-Salami”!

The characters names are different – the Toy Maker, Geppetto becomes “Gelato” and I was laughing out loud when I saw Gelato’s brothers…they’re giving The Godfather a “good” image! Gelato’s assistant is a caterpillar named, “Cricket”. Pinocchi is played by “Pistachio”. I thought these were clever adjustments to the story line. They appealed to my “big kid” humor. The name changes, however, didn’t fool my children, they knew this was the story line of Pinocchio.

Another thing about Veggie Tales I appreciate is that they are centered around Bible Stories. Pistachio: The Little Boy Who Woodn’t is also the story of the parable where the shepherd left his 99 sheep to retrieve the one sheep that had gone astray (Matthew 18:15-20). Pistachio meets up with a “fox” named Confetti and a “cat” named “Purina” and is at a Carnival when he realizes he should have listened to his father.

We were having so much fun that I couldn’t believe when we reached the intermission. This is something every Veggie Tales movie features. It breaks things up just when the kiddos start to possibly become antsy. It is something we look forward to in Veggie Tales DVDs. We love the change of pace and the opportunity to get up and dance! This video’s intermission is “Obscure Broadway Show Tunes”. It is based off of an imaginary hit show “Office Supplies: Where Have all the Staplers Gone?” It was packed with fun and my children were singing along. One caution here is there is a stapler in this scene, at the end, where the staples protrude like fangs. My four year old yelled, “he’s a vampire.” It could be frightening for some children.

When the movie was over the kiddos and I talked about what the movie was about and the message it was sharing with them. I have smart kiddos! My four year old said, “I should listen to you because I don’t know things.”

My children really enjoyed this DVD. We’ve watched it twice and they are begging to view it again! I even enjoyed this movie. The movie runs 50-minutes, which just zips by with its action packed animation, clever characters, delightful songs and a message that fits into my family’s values.

The only disappointed we experienced in this DVD is that when it was over my kiddos were excited to access the “Bonus Features”. They enjoy playing the Veggie Tales games. Sadly, this video does not contain this “bonus” and my kiddos were bummed.

We’re so glad to have added Pistachio: The Little Boy Who Woodn’t to our movie collection. It’s a movie I’m sure we’ll keep in our rotation for a very long time.

The fun continues with a very well put together Family Fun Time addition to compliment this DVD. It has some great activities centered around family and the importance of listening to parents. It’s a great follow up to this awesome movie.

If you have VeggieTales fanatics in your house, be sure to become a Veggie Tales fan on Facebook for news, specials and even behind-the-scenes videos! There’s even a VeggieTales iPhone App. For a chance to win a VeggieTales cruise on Royal Caribbean’s Majesty of the Seas, check out the contest on Big Idea’s website.

View all posts by Julee →