Our family recently had dinner with family friends when hubby’s mom visited from out of town. After a nice meal, our hostess offered us some homemade pie – rhubarb or apple. When she brought it all to the table, she brought along a brick of cheese. Now, I have to tell you, she makes wonderful pies. I decided to have a small piece of each (yes, I love pie) as well as a small piece of the cheese (yes, I love cheese). DH had filled up on the meat and potatoes so he passed on both the pie and the cheese.I realize the point of the cheese being served alongside was because many people put a piece of cheese on top of their apple pie. Me? Nope. I’m not closed minded, it just isn’t my preference. When the movie Ratatouille came out, the rat explained that sometimes two foods taste good alone but when you put them together, it’s even better. Even my youngest daughter understood that concept. As I said before, I love pie and I love cheese so I don’t see the need to mix the flavors… even if it does provide a heavenly new taste.

A few weeks later, DH and I were helping my dad paint his garage while my mom was hosting a brunch for some of her friends. It was casual so mom had planned for us to eat with them during brunch and we talked about all kinds of things… including pie. One of mom’s friends proudly announced that she finally had mastered an old family pie recipe – complete with cheddar cheese on top. My dad, who never met a pie he didn’t like, asked “Cheese? On pie?” DH interjected “Yeah, I just learned about it yesterday when Nicole’s Hickory Farms basket arrived.” I was surprised that neither knew of this custom!

What DH was referring to is one of the cheeses in the Hickory Farms Family Gathering basket that I received from Mom Central on behalf of Hickory Farms as part of a blog tour campaign. It was named “Apple Pie Cheddar“. He asked “What’s with that?” And I explained that some people eat cheddar cheese on their apple pie. Then I shrugged. Apparently it’s good, but I still don’t see the need to ruin a perfectly good piece of cheese.

I signed up for the campaign because I love Hickory Farms products. As Christmas nears, I hate the crowds at the mall, but I enjoy checking out the Hickory Farms kiosk that only shows up at this time of year. For as long as I can remember, I’ve loved summer sausage. Oh, and have I mentioned that I love cheese? Well, this basket not only contained 2 Beef Summer Sausages but also two bricks of the Apple Pie Cheddar, a Ham Summer Sausage, a Pennsylvania Dutch Edam, Hot Mustard, Crackers and a cheese slicer. They arrived in a pretty basket that has now been repurposed to my medicine cabinet to organize all the cold medicines! 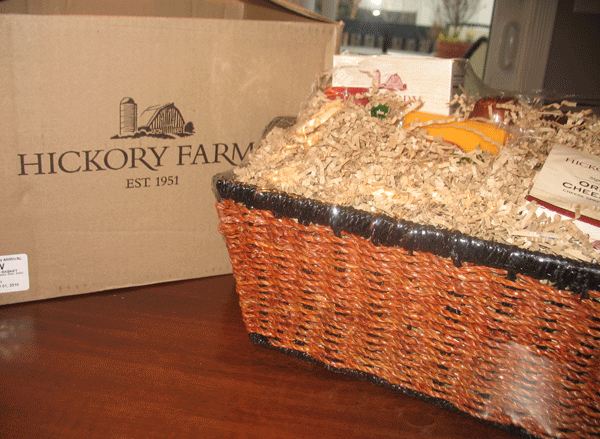 The foods at Hickory Farms are always great. The cheeses were tasty, as was the sausage. The cheese slicer, although not necessary for slicing cheese, worked like a charm. My only complaint with this basket is that it was filled with so much shredding to make it pretty that it was almost too much. But at least it’s just paper and not something like packing peanuts! 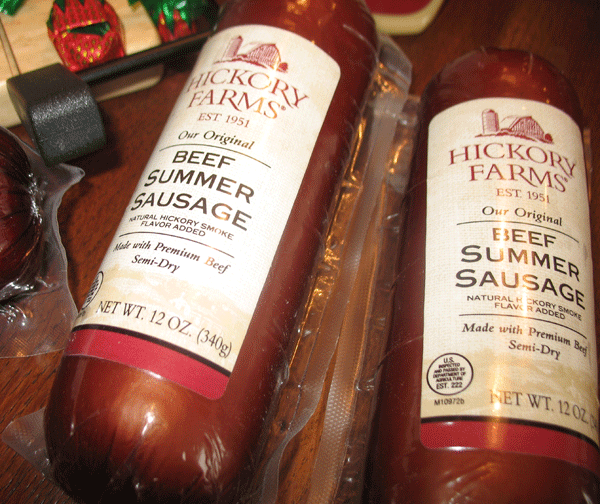 It’s also important to note that Hickory Farms has a social responsibility side, also. This year, Hickory Farms is donating to Share Our Strength. For each basket purchased, they are donating a portion to the Share Our Strength cause. In addition, shipping to APO/FPO addresses is FREE. So if you want to send some love to one of our brave troops, here’s a great opportunity for you to save the shipping costs.

If you are looking for gift ideas, check out the inventory at your nearest store or order online. These baskets are wonderful for giving as gifts but also work well when you’re entertaining. If you don’t want an entire basket, you can purchase some items separately. But Hickory Farms isn’t just about sausage and cheese baskets. As many times as I’ve been to the Hickory Farms kiosk at the mall, I’ve never realized they sold sweets! Various fruit baskets, as well as baked items like fudge, cakes, cheesecakes, tortes and other pastries! Their website even boasts such items as turkeys, hams and appetizers.

While I thought I was a Hickory Farms aficionado when I signed up for the campaign, I now realize I wasn’t even close to knowing all that they offer. Next time I’m at the mall, I’ll be paying more attention.

3 thoughts on “Who Puts Cheese on Pie?”