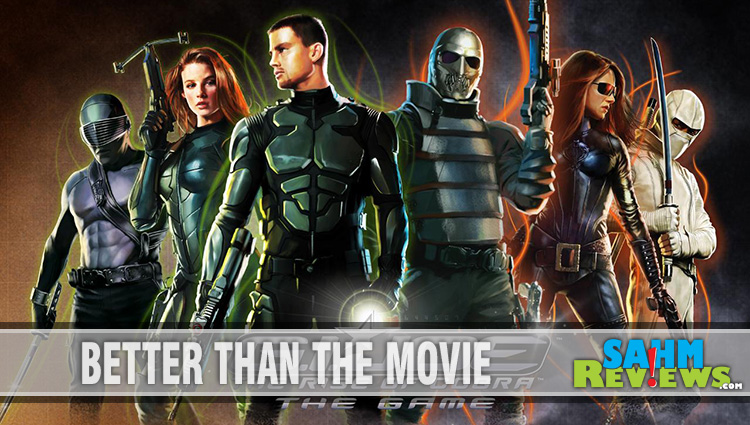 The Ground is Shaking

I had to laugh recently when my daughter said “I feel like the ground is shaking”. We were upstairs in her room and she’s right, the floor was rumbling. She was too young when we moved from Los Angeles to remember what an earthquake felt like. And although an earthquake is not unheard of here in Iowa, that wasn’t the cause this time.Instead, downstairs in the family room, DH was enjoying his XBox 360. He was engaged in a game of G.I. Joe: The Rise of Cobra that was sent to us compliments of Foghorn PR. Shortly after receiving the game, our XBox decided to go on the blink (and that’s really putting it nicely) but we’re up and running again now. Whew.

Anyway, so he was playing the game and it was absolutely booming. I mean, honestly, it’s total warfare so shouldn’t it come with full artillery sounds? What’s the point of having a sound system hooked up to the XBox 360 if it isn’t cranked up for all the fun stuff? So I finished tucking Miss M in, shut her bedroom door, walked away giggling and being grateful that I wasn’t in California explaining earthquakes.

Now, about the game. What did DH think?
Platforms: It’s available for the XBox 360, Nintendo Wii and DS as well as the PS3, PS2 and PSP. We opted for the XBox 360 version over the Nintendo Wii because this seemed like one of those games where better graphics would translate to better game play.

Back-story: The game is based on the G.I. Joe original story-line and is supported by the G.I. Joe: The Rise of Cobra movie that was in theaters this past summer and just came out on DVD a few weeks ago. As you play the game, you have the option of creating your own G.I. Joe team – selecting from 12 characters such as Ripcord, Snake Eyes, Duke and Heavy Duty. For someone in tune with the plot line, creating the team is much more personal than it was for DH who is just somewhat familiar with it.

Violence level: It’s war. There’s shooting. Things are getting blown up. There’s some blood but not as much as watching a horror movie (or real-life war stuff). DH said he wouldn’t recommend it for really young kids, but someone 10 or older shouldn’t be overwhelmed by it.

Game play: I’ve always considered myself not-as-clueless as the average almost 40 year old mom. Having played games like Asheron’s Call and World of Warcraft, I learned a bit of gamer lingo. However, DH threw out a few terms that sent me to gamer-geek lingo school. Basically, I learned what games “on rails” are versus “linear” and “non-linear”. A game “on rails” more or less means you are along for the ride. Think roller coaster or train. You stop along the way for activities but pretty much get back on board without any say in what way you go. If it’s “linear” then you have some choices but are pretty much on rails for the game’s story-line. If the game is “non-linear” then you make the game yours (think “The Sims”). G.I. Joe is a linear game. You have the ability to choose whether to shoot this tour or that one first but once you achieve a certain goal, the game moves you forward to the next designated mission location/goal.

So how does that impact the actual game play? Games on rails are great for younger players because it requires less decision making. So with respect to G.I. Joe: The Rise of Cobra, since it is linear, it’s great for younger players (factoring in violence levels) or for players who enjoy working toward the end-game. And if you know someone who is a huge G.I. Joe fan, then it’s a no-brainer.