When I was growing up, my brother collected baseball cards.  My parents would go to the local warehouse where you could get stuff for the concession stand at ball games (in the days before places like Sam’s Club) and buy him boxes of cards as his birthday present.  Although I loved that he shared the gum from the packs, I also had an interest in the cards themselves.When I met my husband, he was an avid trading card collector.  Since I already found cards fascinating, I welcomed his hobby with open arms.  We used to set up at shows and sell whatever the latest fad in cards was but we focused mostly on rarer cards, tobacco cards and novelties.  As we watched the customizable card game craze take hold, he bought me packs for one of my favorite shows – Star Trek.  I never sat down and played with them but rather just wanted to collect them.

Since then, packs of cards have become mainstay in their own personal aisle at places like WalMart, Target, KMart and even GameStop.  Aside from the fact that games like Bakugan or Pokemon could be played offline with peers, many also touted an online option. 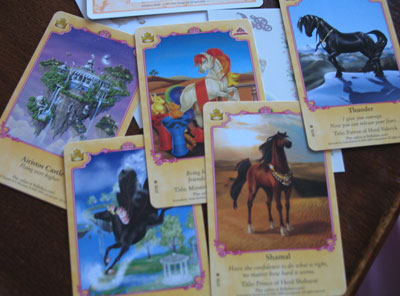 Since I have plenty to keep me busy, I don’t much research or collect those cards any more.  And I figured my girls were still a bit young for such games so I hadn’t followed the latest fads very much.  Then along came Bella Sara with their Royalty cards.  A customizable card game with a free online component.  For little girls.  Like mine.  They aren’t into My Little Pony so maybe they won’t dig this pony game much. But since it’s a computer thing, I’m guessing the odds are in Bella Sara’s favor.

So I set out to test the waters… In preparation of their play, I logged on and set up their accounts (free, in case you missed that before).  Once on, I received an email confirmation with a link to a parental control section containing options for allowing friends and limiting daily usage. The one thing I couldn’t do that I wish I could have is change their user name.  Had they been a little older and set up the accounts on their own, I would have liked the option to edit them if they used their whole/real name and I didn’t want them to. 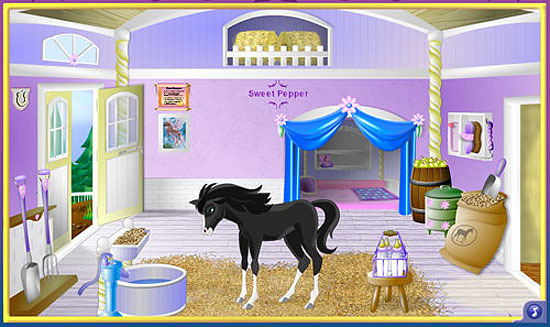 The basic premise is that you have a horse to take care of.  Feed it, comb it and explore. But there are additional games to play and things to see to send each child onto a completely different path.  Both my girls are playing and I’ve only seen them play the one of the same activities. Apparently, Bella Sara has been around for a bit since Royalty is their ninth release!  You can play online then purchase additional packs to gain access to other cool stuff.If your child wants to further explore, additional card packs can be purchased at places like WalMart for a nominal fee.  Within each pack is a new code that opens up additional horses, cottage items, castle rooms and more.

So go ahead, splurge on a pony for your daughter for her next birthday.  Bella Sara ponies are less expensive to take care of and don’t leave any unwanted packages in the yard.